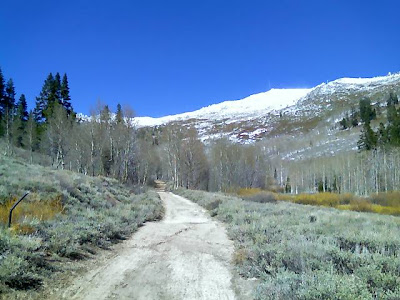 After the Prison Hill race, I decided I needed a long run on the Tahoe Rim Trail to welcome the advent of summer in the Sierra. Unfortunately winter breathed one last gasp in the week prior to this planned run, and blanketed the mountains with another 6 inches of snow. By the time Saturday rolled around the weather hadn’t warmed up much, and I still wasn’t sure if the trail would be runable. I remained undecided until about 9:00 am, when I realized I just couldn’t let go of my plan. I’d been looking forward to this run all week! I decided that if it turned out to be just a hike in the snow, that would be okay too.

It was fairly warm at my house, enough to feel comfortable in shorts, a short sleeved shirt and a long sleeved shirt. I threw a windbreaker and pair of tights into my running pack just in case, along with 2 PBJ sandwiches, several packets of GU, a 70 oz bladder filled with raspberry GU2O, warm gloves, headband, and requisite other items such as Advil and TP. One big advantage of the running backpack: you can be prepared for everything! I packed another bag with post-run sandals, water and food that I would leave in the car, and I was off.

I arrived at Spooner Summit about 40 minutes later, and as soon as I opened the car door I knew I would need my tights. It was about 45 and windy. Brr! My planned route had me starting out with what is actually the last 1 ½ miles of the TRT race. I would pass through the start/finish area to head another 4 ½ up to Marlette Lake. (This stretch is the very beginning of the race.) At Marlette Lake I planned to diverge from the actual race route. I figured both Marlette Peak and Snow Valley Peak would have too much snow still. Instead, I planned to skirt along the west side of Marlette Lake and run the Flume Trail. I would then turn around and run the same route back to my car.

The Flume and Rim trails. I essentially followed the red line up and back.

I headed out at about 11:00 with my warm gear on, including the gloves. It was a brilliantly beautiful day, and although I still had no idea what I would encounter at higher elevations, I already knew I had made the right decision in coming here. I cruised along Spooner Lake and through the meadow, enjoying the easy pace of an all day run. As I headed up the dirt road toward Marlette Lake, I suddenly realized that I had forgotten my camera. Damn! I was really disappointed, as the scenery was already beautiful, and I knew it would only get better. After reading Scott Dunlap’s write up of the Big Sur Marathon, and enjoying Addy’s picture-taking-addiction, I had promised myself that I would remember to bring (and use!) my camera on more of my runs and races. Photos add so much to people’s race descriptions, I often feel like I was there myself. I guess “camera” just hasn’t made it to my mental pre-run checklist yet. Well, it’s something to which I can aspire in the future.

As I gained elevation, still at mile 4 or 5 of my run, I began to encounter snow. It was clearly all from the most recent storm, as it was only 2-4 inches deep, and didn’t pose much of a barrier. The landscape was stark and clearly still in the midst of winter at this elevation. There was no grass, no wildflowers, and the white snowy ground seemed to blend right into the granite of the mountains. Everywhere the aspens were tall, leafless white sticks, still waiting for spring.

I also realized at this time that there were no footprints in the snow. I turned to look back at my own prints behind me, and ahead again at the untracked trail stretched out before me. This is typically a heavily used trail, and I relished the knowledge that I was alone in this wilderness.

Continuing my upward climb, I watched as Marlette Peak began to show itself through the trees. I played tourist, reading some of the trailside signs, and stopping at an old cabin that was once used by the shepard of a ranch which used to be in the area. It had been restored to make a nice picnic shelter. 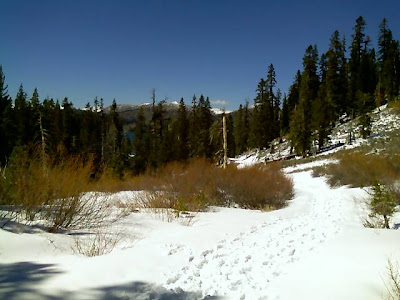 Soon I was heading downhill, the last stretch to the lake. The snow was a bit deeper now. Suddenly a pair of footprints popped out of the woods onto the trail in front of me. I was taken aback. Who were these people, and where did they come from? Why had they been tromping through the woods instead of on a trail? Admittedly I was a bit disappointed to lose my feeling of solitude, even though I hadn’t seen any actual people. As I cruised down the hill, adding my own footprints to theirs, I wondered if they were runners too. Maybe they were hikers who had gotten lost. Maybe they were locals headed to the lake for some early season fishing. Then, just as suddenly, their footprints disappeared again back into the woods. Just like that, I was alone again.

The lake was breathtaking, and still half frozen. The gusting wind made the blue water choppy, while a white frozen sheet pressed up against the southwestern shore. Here the TRT course turns right, heading up Marlette peak, which was still encased in a frozen world. I took a left turn in order to connect with the Flume trail, which would keep me at about my current elevation. I knew this side of the lake, shaded from the sun by a steep ridge, would likely have a lot of snow. I was tromping through it when I met the footprint owners: just a couple out for a hike, albeit a long one. When I left them behind, heading in the opposite direction, I again found myself on untracked ground.

I had been correct about the deeper snow on this section of trail. About every third or fourth step I was post-holing through to just below my knees. I found that a lighter step kept me from breaking through the top layer, and changed my stride to more of a run/walk in order to stay on top. 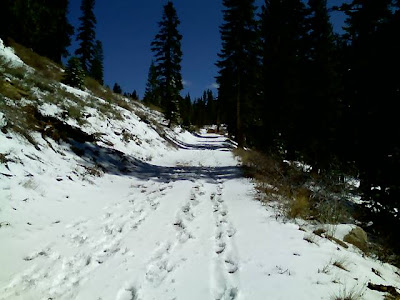 The one hazard that I knew might force me to turn around was the outlet to Marlette Lake. The trail basically goes across the tip of the lake, just before the water pours down a ravine. In the summer I could ride my mountain bike right through this section, but I knew the water level would be higher this time of year. Fortunately it looked like I could climb across some rocks on the left side of the trail and avoid the water. Unfortunately the rocks were covered with snow. I weighed my options: #1- Climb slippery snow covered rocks and risk falling into the water. #2- Take off my shoes and socks, hike up my tights and wade through the icy water. I decided to take my chances and went with option #1. I made it!

Soon I crossed over to the other side of the ridge to get on the Flume Trail itself. This side of the ridge faced west, and suddenly I went from trudging through fairly deep snow, to absolutely no snow at all. Hooray! I was drenched in sun and gazing at the glory of Lake Tahoe far below me. This is quite possibly my favorite trail in all of Tahoe. Although it is only 4 ½ miles long, it’s worth all the effort it takes to get there. The Flume Trail follows what was once a logging flume used to send the logs down to town, the train, the mill, etc. The flat single track trail traverses a ridge above Lake Tahoe, treating you to fast running (or biking) and stunning views. Now I was really feeling bad about my forgotten camera. 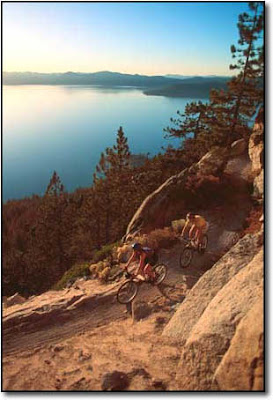 I nonetheless ran this stretch with a huge grin on my face. I stopped to take my long sleeved shirt off so I could feel the warmth of the sun on my arms. That didn’t last long, since the icy wind blew the warmth right off! I passed Sand Harbor, and turned around just short of the Tunnel Creek Road which heads down to Lake Tahoe. I was aiming to get in 22 miles, but looking at the map it may have even been 23.

When I finally returned to the north canyon trail, in the last 5 miles of the run, I remembered that I had my cell phone with me. It has a camera! I smacked my forehead in a mixture of frustration and excitement. I had missed all the incredible shots of the Flume Trail and Marlette Lake, but at least I would get a few pictures.

Back at the car I smiled as I changed into my flip flops. Although it had been somewhat more of an adventure rather than a pure run (I figured I spent about 7 miles on snow) it had been a wonderful day. I went about 22 miles in 5 hours. I also noticed that the amount of snow on the trail on my way back had been considerably less. It's melting quick! I would imagine that by this time, the trail is in perfect condition for running. Everyone, let the altitude training commence.