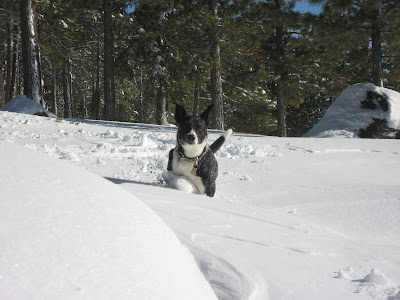 Growing up in Southern California, I never even knew there was such a thing as “the off season.” To me, that simply meant the relaxing lull between cross country and track seasons, when I ran on my own for two weeks over Christmas break. It wasn’t until I moved to Minnesota when I was 22 that I discovered the true nature of seasonal sports.

I was more of a climber than a runner at the time, and I was a bit stunned when I realized that my main option for winter climbing was 5 months indoors hanging out with spandex clad chalk hounds who’s primary concerns were whether that hold was “on,” and if their buddy spent too much time hangdogging. I took a brief foray into rock climbing’s much less popular winter cousin, ice climbing. Although I did love the gear, (How cool are crampons! And ice tools? They look like something straight out of a slasher movie!) I did not enjoy the shivering stints at the endless belays in 20 below temps, bundled in my partner’s oversize down coat and trying desperately to keep a decent grip on an icy rope with giant mittens on my hands.


Ice climbing not turning out to be my big passion, I decided to try my hand at other winter sports. That led me to dog sledding, naturally. Well, I was in Minnesota after all. I spent a winter working as a handler for a musher in the northern part of the state. While I spend more time on other winter sports these days, dog sledding was a passionate and intense love affair. A friend once described it as the winter equivalent of white water kayaking. Thrilling! Unfortunately, it also requires a lot of dogs.

Living in the Sierra, I have turned my off-season pursuits to sports more practical to the locale, like skiing. Lest you think skiing is purely a gravity sport, and not much of a workout, let me enlighten you.


Cross country skiing is in many ways the winter equivalent of trail running. You can get out into the beautiful parts of the mountains, with little or no other people, and it’s an incredible workout. I love skate skiing for the high intensity and speed, and classic skiing for its access into the backcountry and untracked beautiful areas. 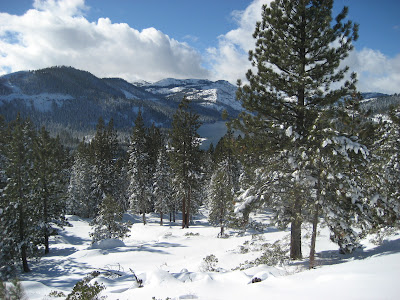 Even at the downhill resort, I get a workout telemark skiing. It’s essentially like doing squats all day long, no joke. In the last week I got in my first two ski days of the year, spent about 3 hours skiing each day, and my quads feel like I just finished a 20 mile downhill run. If that doesn't seem like enough for you, try tele skiing in the backcountry. A few hours of skiing uphill to 'earn your turns' will kick anyone's butt. Definitely good off season training.


Currently I’m on winter break, and enjoying the opportunity for a little more exercise. Christmas came early for me when a winter storm caused a snow day on the last day of school before break. (Did you realize when you were a kid that your teachers looked forward to snow days more than you did??) I spent my snow day cross country skiing through the forest out my backyard with my two dogs. I forgot that deep powder is better suited to downhill skiing than cross country, and it was a serious workout. I tried to get the dogs to break trail, but the powder was over their heads, and they are too smart for that. It took me 2 and a half hours to ski a trail that is a 30 minute run in the summer time, and I loved every minute of it! 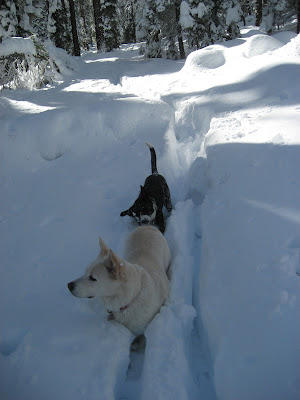 XC Skiing: "Get off my ski tails doggies!" 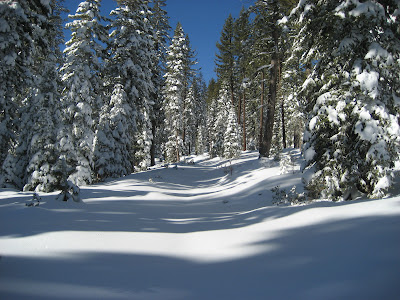 The Unbroken Trail Ahead

Ultimately, I have come to love the off season sports in their own right. I know my body can't handle 12 months of running, and I am ready for a change of pace by the time fall comes around. I'm not as comfortable with any sport as I am with running, but that's part of the enjoyment. Facing a steep downhill slope on a pair of skis is definitely pushing the limits of my comfort zone. Other things have to take a back seat to training for races so often, that its fun to get some variety in my exercise. Winter time also brings an increase in my yoga practice, which I have found is critical to maintaining a healthy physical balance. The strengthening and stretching of a variety of muscles in yoga, dissolves the tension that builds up in a season full of running.

At this point it’s time to start training for next year’s races. I haven’t really decided on my races yet, but like most of you, I won’t be running Western States this year. There have been a number of heated discussions on other blogs about how hard it is to get through the lottery, (You have a 13% chance according to the WS website!) so I won’t go off on the topic here. As a two time loser however, I was especially concerned by this statement in the rejection email, “Be aware that the WS organization is considering a modification to the two-time loser rule, however, and your two-time loser status may be impacted by change to the protocol.” Great. To be honest, I would like to run another 100 before an attempt at States, so I wasn’t disappointed at all about not winning the lottery. However, I was kind of counting on that “two time loser” status to get me a guaranteed entry into the ’09 race. It will be interesting to see what happens.


Two probable races for next year include Miwok 100K and TRT 100. If I’m really going to do TRT, then that will be my focus, and any other races will simply be training runs. One thing to note if you’re interested in doing Miwok: it appears to be going the route of Way Too Cool. Last year it filled in three days. Entries for the 2008 Miwok race open on January 6, so I suggest you mark your calendars. (Of course, I marked my calendar for the Way Too Cool sign-up, but I forgot to set my alarm. Oops! Guess I’ll be volunteering this year!)


Looking back on the year, I had a full load of races and a great season. Admittedly, the only race I was really in ideal shape for was Way Too Cool, which was very early in the season. Still, I was happy with my race at TRT 50, and HK50, and I really enjoyed all of my other races. I think my favorite race was the 12 Hours at Cool night run. There is just something about the serenity of running alone at night that is quite unlike most other trail running.


Have a happy new year everyone. I’m off to write my training calendar for 2008! 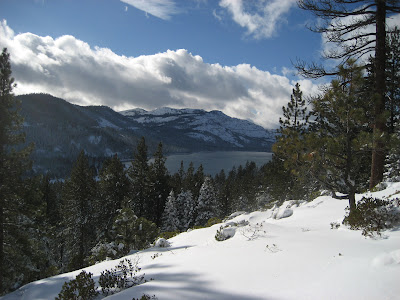 Donner Lake, viewed from our xc ski on "the back loop"