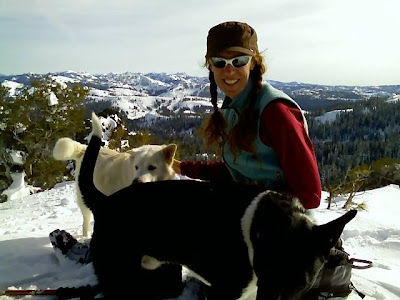 Gus, Cap and I take a break on the way up to Castle Peak

This past week was a holiday that we in the mountains refer to as “ski-skate week.” It’s basically a week-long President’s Day holiday. I don’t really know where the 'skate' part comes in, but the slopes definitely get a little more crowded during this week. I was planning to use the extra time to boost my running miles, paint my living room, and get a few more chapters on to my book. Ah well, things never seem to work out exactly as planned for me.

Since living in Tahoe, I have become what one might refer to as a “powder snob.” In other words, if it’s not a powder day, I’ve got other things to do besides ski. Well, this winter there have not been many powder days that also coincided with my days off. This week, that all changed. Winter made a brilliant comeback with a series of storms that resulted in almost a week's worth of fresh powder. Running was happily put on hold while I got in six powder days in a row. I still haven’t quite wiped the grin off my face.

So, in celebration of the return of my inner ski-bum, I thought I’d share a little tutorial in the on-the-hill lingo you might get from skiers and boarders. As with many sports, one who is not part of the scene can often have trouble interpreting some of the basics. In the same way that your office buddies scratch their heads when you talk of tempo runs and fartleks, so too will the uninitiated skier find his eyes glaze over when the kids spew about getting first chair, schralping it, and sick freshies.

So, next time you’re in Tahoe, keep the following words and phrases handy, and you’ll be welcomed as a local.

backcountry n. any area not within the boundaries of a ski resort

as in:
Shane: “You going backcountry today bra?”
Chris: “Nah, the avy danger is sketch out there man, we’re keepin’ in inbounds today.”

corn n. snow that develops after several days of a melt/freeze cycle; requiring cold nights and warm days, it usually forms in the spring; characterized by small pebbles or kernels of snow, it is fun and easy to ski; also known as “hero snow”

Becky: “Where did you guys ski today?”

Gretchen: “We totally farmed the south face of . The corn was deep, and it was so warm, I was skiing in my tank top!”

face shot n. snow that flies up in your face as you are skiing powder; usually the result of deep and/or very light pow; face shots are a huge bragging right.

Gretchen: “No kidding! I got face shots all day!”

as in:
Gretchen: “I got first chair 5 days this week!”

Brian: "I got some sick freshies this morning!"

Liz: (whining) "I had to work this morning! By the time I got there everything was tracked out!"

gaper n. someone from out of town whose not really down with the scene; frequently spotted skiing in jeans and using straight skis

Frank: “I thought I might go night skiing at Boreal tonight.”

Jason: “Seriously? You’re going to be hanging with all the gapers!

huck vb. to throw, launch or fly (usually one’s self) off a hit or cliff

Larry: “Did you check out Meghan in the park today?”

Andrew: “Yeah man, that girl can seriously huck her meat!”

Steve: “You get out there today?”

Cicely: “Dude, I was schralping it!” 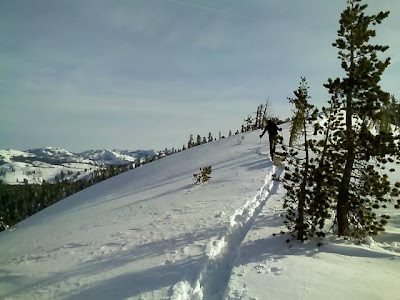