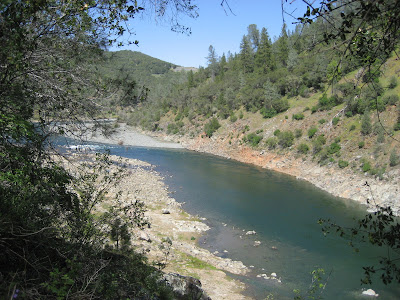 Before embarking upon my race report for the wonderful American River 50, I must apologize for my lack of a report on Rucky Chucky. I can see that if my blogging is going to keep pace with my race schedule, I will have to reform my slacker ways. I don’t hold out much hope, but I’ll do my best.

So a brief recap of Rucky Chucky: I went into the day with very little running in the previous 6 weeks. I knew if I had any hope of finishing AR50, I would need to get through this race without much trouble. Fortunately, that’s exactly the way it went! I shared a cool, and slightly rainy, day with some familiar faces and new friends, including Peter, Catherine and Dave. I took it fairly easy, enjoying the scenery and the dirt trail, and finished in 6:25: 2nd woman. I was a “go” for AR50!

By now, my husband is fairly used to my running antics, but even he balked at the fact that I wanted to set the alarm for 2:15 am for this race.

“That’s not early, that’s just later tonight!” He declared, with one of those “I don’t understand you at all!” looks on his face. I just shrugged my agreement.

I was in the car by 2:50, coffee in hand, for the drive to Auburn. After getting slightly stressed out by the freeway closure and subsequent detour, I arrived in Auburn on time for the 4:15 bus to the starting line.

I had the fortune to nab a seat between the familiar faces of Scott Dunlap and Catherine Sullivan, and we spent the early morning hour catching up. It made the normally anxious waiting go by quickly.

Unfortunately the bus left quite late, and we arrived at the start at about 5:40 for the 6:00 race. I still had to check in, and the line at the outhouse was predictably long. I had to forgo pre-taping my feet, and rushed through my pre-race duties just a bit frantically. Finally, I tossed my finish line bag into the appropriate trailer and dashed toward the start. I was still a few hundred yards away when I heard the race start, but no matter, it would be a long day.

I moved my way steadily through the crowd in the dark. With 650 runners, it made for a tight start on the bike path—unusual for an ultra! I saw the leaders headed back, and soon I was at the 1 mile turn-around and heading towards Auburn. 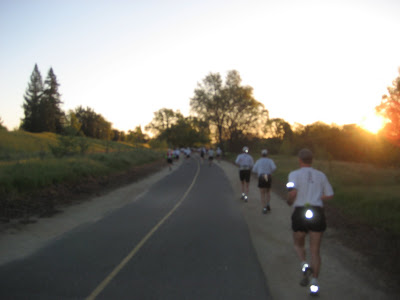 The sun came up, and suddenly Scott appeared from behind. I thought I had seen him going the wrong way at the start! Apparently he decided last-minute that gloves would be an appropriate asset for the morning. I couldn’t disagree, since I was a bit chilled in my tank top and shorts, but being from Truckee, I was more concerned about the heat later in the day. Anyway, I think the gloves were just an excuse for Scott. Coming from the back, he had a chance to chat with everyone in the race. What a nice guy! He jogged along with me for a few minutes before moving on to socialize with faster runners. 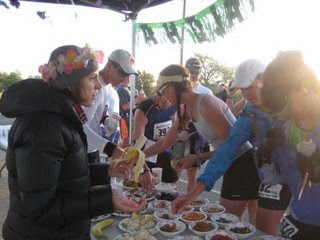 Me--pigging out at the aid station! (photo courtesy of Catherine) 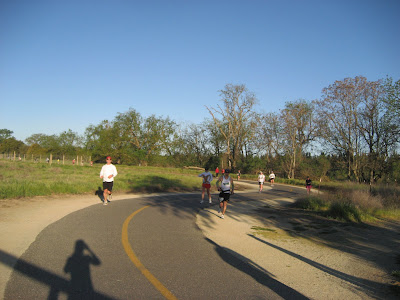 Eventually I caught up to Catherine, and we ran together for a little bit. Our walking breaks weren’t matching up though (nor were our bathroom breaks!) and it seemed like most of the time I could see her 50 yards ahead, but we weren’t really running together. I considered skipping a walking break to catch her, but I knew I would pay for it later. I was just about to catch her again when I saw her veer off toward an outhouse. Nooooo! Oh well. I wouldn’t see her again until the finish line. 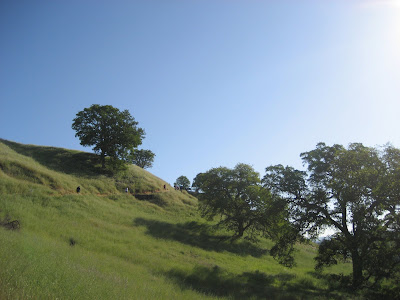 The day was looking beautiful, and these early miles were easy. My watch said I was probably running a bit faster than I should be, close to 9 hour pace, but I knew the trail section of the course would be slower. I stuck to the dirt shoulder of the bike path as much as possible, and the miles flew by. 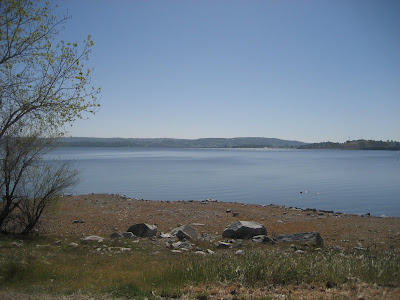 The view from Beal's Point

Soon we were at Beal’s Point, and switching to mostly trail. I kept company with my ipod for a little while and soaked in the scenery. I just don’t understand people who don’t like this race. There is a lot of trail, though most of it is non-technical and not too hilly, and the setting can’t be beat. Even in 2006 when it was rainy and muddy, I had a blast! This year, the flowers were beautiful, and the green hillsides a nice change from the dirty, melting snow in Truckee.

In ’06 I struggled between Granite Bay and Rattlesnake Bar (~miles 31-40). This year I felt strong through this section, and this was where I began passing people. I was loving the trail and the weather, and could tell that I wasn’t going to blow up. I chatted with a few folks as I moved through, and I am disappointed that I can’t remember anyone’s name. I can’t figure out how bloggers like Scott can remember so many people’s names, hometowns, times, etc.! 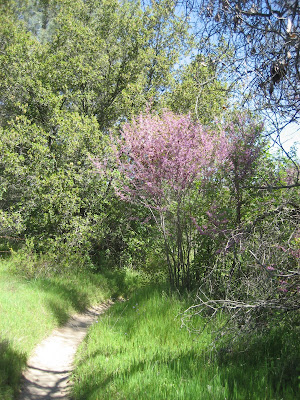 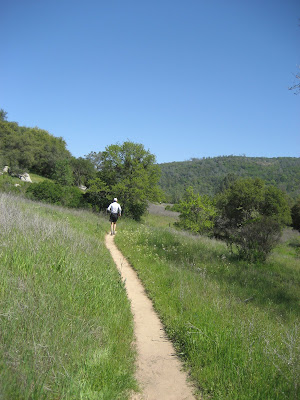 By the time I reached Buzzard’s Cove, the day was warming up. Although the aid station was advertised as water-only, the first thing they offered me upon entering was an ice cream cone. I questioned the wisdom of that much dairy at mile 35.

“Twietmeyer took one!” came the testimonial from the ice cream man.

“Okay, you sold me,” I reached out to grab the proffered cone, and the ice cream man laughed. I laughed myself, when around the next bend I found myself posing mid-lick for the official race photographer.

After passing through Rattlesnake Bar, I knew that I only had ten miles to go. This section of trail was mostly gentle, and quite scenic. I stayed with my comfortable pace, thinking I might be able to finish in 9:30—about the same as in ’06! I could tell that I was pushing things a bit, but that I would finish feeling fine. I was more concerned about how this race was going to affect the Diablo Marathon in 2 weeks. Wait! Don’t start worrying about the next race before this one is even done! 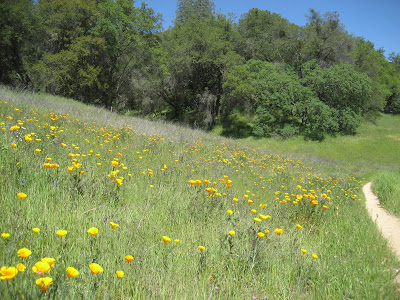 Approaching Last Gasp, I found myself walking the steep stretch of dirt hill. After the aid station, the trail gives way to pavement and the slope relaxes quite a bit. I was able to run most of this section. After a few minutes, a woman whom I had passed just before the aid station, came up behind me. She had a pacer, and was moving well. Since I was running, not walking, I didn’t feel too bad about being passed, especially since I had just passed her a few minutes before. Still, I thought she looked familiar. Could this be the same woman who had passed me in the last 10 miles of TRT last year? Well, I had certainly been delirious at mile 90, so who knew what that woman really looked like, but I recalled her age, and this woman didn’t look old enough. I convinced myself it wasn’t her.

Once the hill was over, I knew I was basically ‘there’ and ran in to the finish line. I had to flash the announcer a big smile as he declared my pigtails ‘beautiful!” Braids are the best way to keep my hair from becoming a snarled mess during a long run, but if someone wants to think they’re beautiful, hey, that’s cool by me! 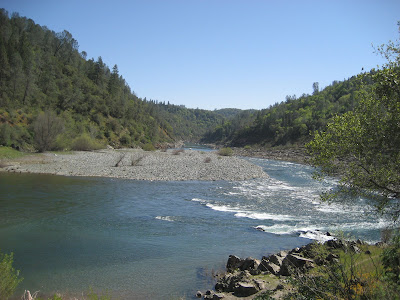 Crossing the line, I was gifted my beautiful finisher’s jacket. I finally requested the right size this year, and I LOVE this jacket. Seriously, I don’t think I’ve taken it off since Saturday.

I scrubbed poison oak from my legs, and stretched out in the sun with a cheeseburger, coke and ice cream. Yum! I caught up with a few other runners, including Jeff Barbier, Jenny Capel and Catherine, and scanned through the results while I waited for my massage.

And then I saw her name. It WAS her! Yes, the same woman who had passed me near the end of TRT had just finished right in front of me. Dang! Well, it was a good thing I didn’t know, since I wasn’t supposed to be getting competitive today!

I finished with a course PR of 9:22, which made me satisfied. I don’t know my place among women, but I was 11th in my age group. Not bad really, for such a competitive race. 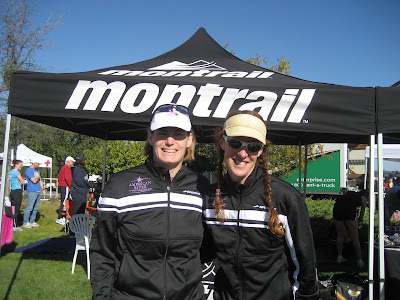 Catherine and I sport our awesome finisher's jackets!

All in all, it was an excellent kick-off to my spring break! Thanks to Julie and everyone who helped to pull off this wonderful event!

I think my “race-your-way-into-shape” training plan is going fine. I was extremely sore after both Rucky Chucky and AR50, but I am feeling good today.

See you all at Diablo?