One Eighth-Grader at a Time 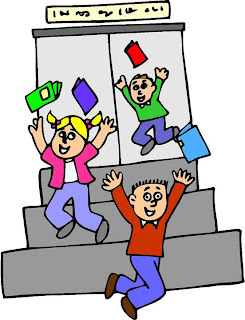 Tomorrow is the last day of school. The kids have been counting down the days all month, and so have most of the teachers for that matter. Long nights of homework, studying for tests, writing tests, writing papers, grading papers and reading, always reading, give way to swimsuits, boats, long trails, gardening, outdoor concerts and farmer’s markets. The mood at school is a mixture of last minute stress and spring fever. In a building where everyone is so desperate to move on to the next phase that some have already turned that page, I feel slightly alone. For the first time in my life, I’m not ready for it to be over.

Last year was my first year at my current school, and it was my first year teaching high school English. (I’d previously taught all subjects in a seventh grade classroom at a different school, but I knew English was my favorite subject.) Not only was I teaching a multi-grade (6-8) language arts class, I was also taking on three classes I’d never before taught, (9th grade, 10th grade, and 12th grade English) and planning the curriculum for all four. That would have been exciting actually, even if stressful, but unfortunately the attitude and behavior of my 9th and 10th grade students broiled the year into the most challenging I’d ever experienced. It wasn’t pretty, and in October of that year I was certain that I would never make it to June.

There is something to be said however, for the notion that the achievements for which we fight the hardest offer the sweetest victories. By the end of the year, I’d seen a noticeable improvement in their writing, they were reading (and discussing!) the books, and we had developed a mutual, if grudging, respect for one another. I felt like I’d climbed Everest, and I was filled with relief upon arriving back at base camp in one piece. The onset of summer that year was sweet, to put it mildly.

On the first day of school this year, I immediately knew things would be different. The hallways held both order and excitement, the air smelled fresh and fearless, and despite my multi-grade classes, I had very few of the same students as the previous year.

When I think of my teaching experience this year, I think of one class: Middle School Language Arts. My high school classes went quite well, but at heart, I am a middle school teacher.

People always think I’m a saint for teaching middle school, but I can’t imagine a better age group. Middle schoolers are so full of life. They’re not as cynical, as snide, or as “me, me, me!” as teenagers, but their intellect explodes in comparison to the younger kids. They’re still children, just embarking across that tenuous bridge of adolescence toward adulthood, but they’re so driven, so intent on becoming someone, and figuring out just who that someone is. They’re exuberant, silly, smart, and they make me laugh every single day.

In a workshop I once attended, I was given a writing prompt that asked me to describe the space where I was my most genuine self—my comfort zone. Other people described bedrooms, time with family, and vacation destinations. My first inclination was to describe running on a long mountain trail. What I ended up describing was my middle school classroom. That is absolutely where I am my “best self.”

I am teacher, guide, counselor and role model. I want to do everything I can for these kids. I want to be perfect.

And because they, too, are working to be the best students they can be, they allow me a great opportunity: I get to be Gretchen.

One of my favorite projects that we tackled this year was something called Script Frenzy. It challenges the author to spend the month of April writing a screenplay. For adults, the page count goal is 100 pages. For students, I worked with them individually to set their own goals. They ranged from 15 pages, to 45 pages. 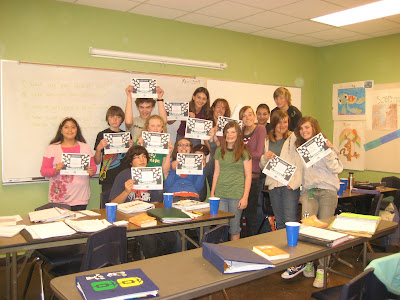 With my students during our "It's a Wrap!" party after Script Frenzy. The certificates they're holding say "Let it be hereby known that [name] author of [name of screenplay] courageously threw caution to the wind and stepped up to the challenge of writing a script in the month of April. We salute the named scribe's creativity and commitment in undertaking this deadline-driven script writing adventure."

Prior to taking on this project, I knew absolutely nothing about writing a screenplay. Fortunately, the Young Writer’s Program at Script Frenzy offered a wonderful array of lessons and teaching materials on the topic. The students were daunted at first, as was I. We dove in together, and emerged, 30 days later, as real screenwriters. (Yes, this was one of those projects that I did along with the kids. If I can’t do it myself, how can I expect to teach it, right?) They were so proud of themselves at the end of that month. You can imagine how I felt.

I think there’s something about teaching writing and literature that allows for great human connection and insight. We have to trust each other enough to be honest with our personal thoughts. I know so much about these kids based on what they write and based on their sagacity in regard to literature. I feel privileged when they take that risk to share something personal, some pieces of themselves.

They’ve even inspired me in other ways. Every Thursday before Language Arts, we gather to play our guitars together. Most of them are better musicians than I, and frequently I find that it’s the best hour of my week. In fact, they have arranged to play some songs at our end of the year beach party, and have insisted that I play with them. I can’t believe I haven’t talked my way out of this one. (I managed to avoid it at our school Christmas party.) I explained that their parents only want to see them play, not me, but you know they don’t care what their parents want, right?

So picture me tomorrow, on the beach at , with seven 13-year-olds, rippin' School’s Out by Alice Cooper. Seriously.


The reason I don’t want it to be over is that I know this year can never be recaptured. Most of these students are 8th-graders, and many of them are going to different schools next year. That’s what happens when you go to a charter school. But even those that will be back won’t be the same. They’ll be freshmen, throwing off the shroud of middle school like a forgotten dream. They will see themselves differently. Three months from now, and they will be so different.

So I will treasure this year for what it was, and I won’t forget it.

Every year, school teaches me many things: My high school classes showed me how far I’ve come since last year. My middle school classes taught me to hold my students, and myself, to the highest standards. And this year, as with every year, I came away with this one big truth: I have so much more to learn. And that, is a beautiful thing.

I'll leave you with one of my favorite poems about teaching middle school.

I'm writing the poem that will change the world,
and it's Lilly at my office door.
Lilly , the recovering like addict,
the worst I've ever seen.
So bad the whole eighth grade
started calling her Like Lilly Like .
'Till I declared my class a Like-Free Zone
and she could not speak for days.

Lilly's having trouble finding sources,
which is to say, ones that back her up:
They all argue in favor of what I thought I was against.

And it took all four years of college,
three years of graduate school,
and every incidental teaching experience I have ever had
to let out only,

That's a real interesting problem, Lilly.
But what do you propose to do about it?
That's what I want to know.

And the eighth-grade mind is a beautiful thing;
Like a new-born baby's face, you can often see it
change before your very eyes.

I can't believe I'm saying this, Mr. ,
but I think I'd like to switch sides.

And I want to tell her to do more than just believe it,
but to enjoy it! That changing your mind is one of the best ways
of finding out whether you still have one.
Or even that minds are like parachutes,
that it doesn't so much matter what you pack them with
so long as they open
at the right time.

I want to say all this but manage only,
Lilly, I am like so impressed with you.

So I finally taught someone something,
namely, how to change your mind.
And learned in the process that if I ever change the world
it's going to be one eighth grader at a time.