Last weekend I dragged my tired self out of bed on Sunday morning to join friends in a romp through the snow at the Kokanee Salmon Trail Run in South Lake Tahoe. It was my third weekend in a row racing in this part of Tahoe, and the weather, among other things, held this day in stark contrast to the previous two weekends.

Sarah was in from out of town acclimatizing before the Biz Johnson Marathon, and Turi and Amber arrived at my house early Sunday morning to pick us up. It turned out to be a good thing we left so early, as we drove toward the race into an ever-increasing blizzard. Turi was our brave captain, creeping around the hairpin turns near Emerald Bay in near white-out conditions. I think he gets the "clutch performance of the day" award for his awesome driving skills!

By the time we arrived at check-in, about four or five inches of snow coated the ground, but it had mercifully stopped falling from the sky. We joined fellow runners Chris and Dave (rounding out the full compliment of Reno's "Team Library Dork") and Abby (Carson branch of TLD) in pinning on numbers and jumping around trying to stay warm.

Sarah signed up for the 10K since she would be racing at Biz in a week's time, and Dave was returning from injury, so he opted for the 5K. The rest of us gathered for the half-marathon distance. I wasn't feeling incredibly spry, and I was kind of glad for the snow. (It made things a bit adventurous, and distracted me from the fact that I still felt like crap. My previous day's trail run, a planned 18-miler, had turned into 13 very slow and painful miles. I was still sick and apparently unrecovered from the Tahoe Marathon.) 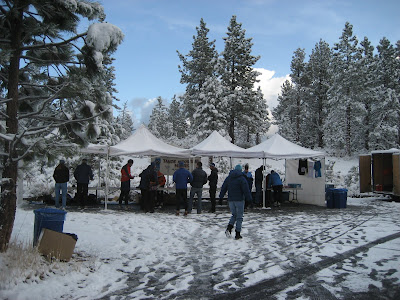 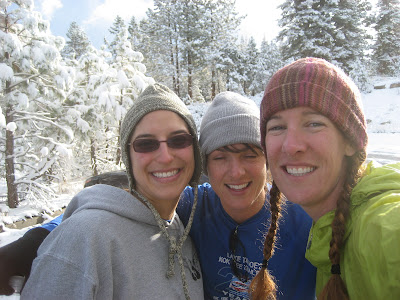 Amber, Abby and me 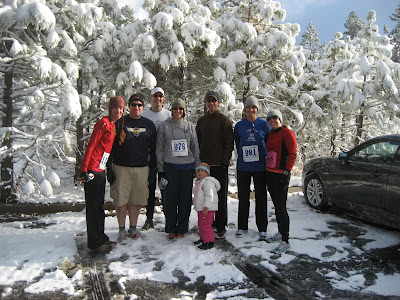 I had time to socialize and say hi to good friends Jamie and Shana from Kings Beach before the half marathon runners gathered at the starting line. 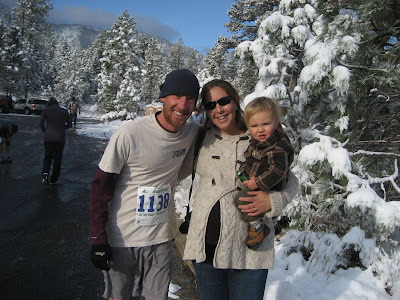 Jamie, Shana, Alden and little-baby-soon-to-be at the start 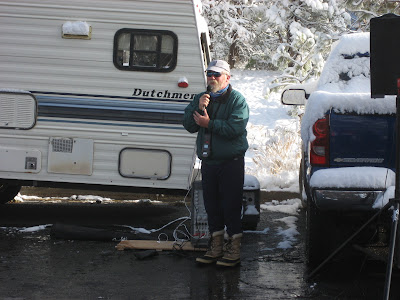 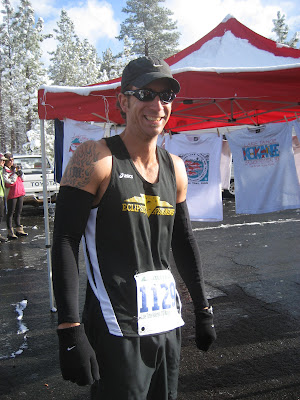 Chris prepares to take it out for the win. 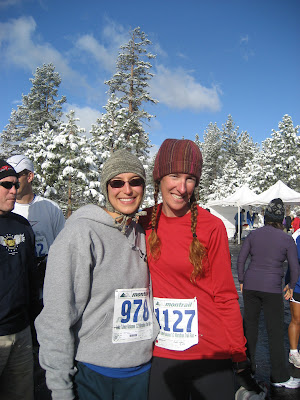 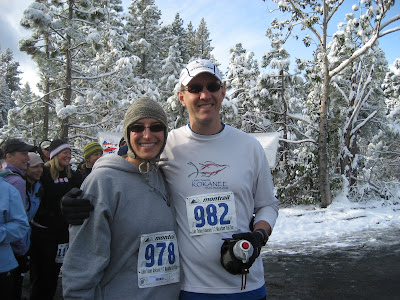 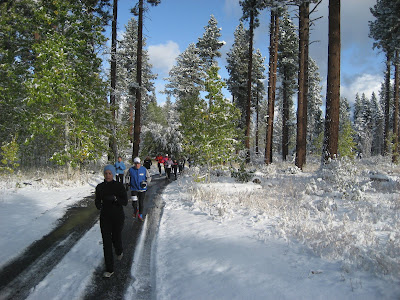 The first two miles were on paved road, but with the snow and ice I was still glad I was wearing trail shoes.

We headed out a paved road for what turned out to be an incredibly beautiful day on a fairly mellow course. Sarah joined us for the beginning of the half-marathon as a warm-up for her 10K. 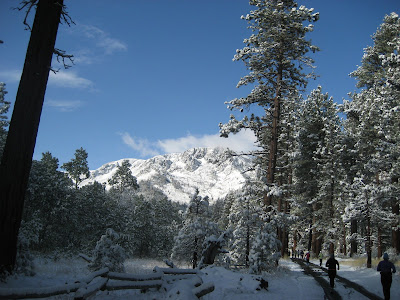 As planned, I kept the pace easy and took plenty of time for photos. The course soon headed off the pavement and onto some snowy singletrack. The technical aspects of staying upright on a snow-slick trail were pretty fun, especially since I wasn't trying to go super fast. I can imagine that would have led to disaster. 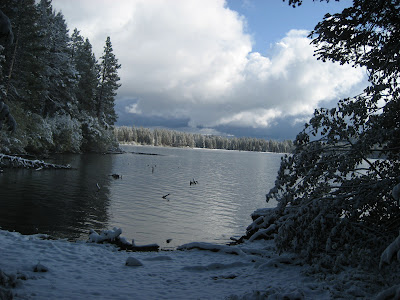 The trail meandered around Fallen Leaf Lake, and the scenery with the fresh snowfall was unbelievable! In spite of my easy pace, I felt pretty tired, but I was so glad I was out running through this stunning beauty. 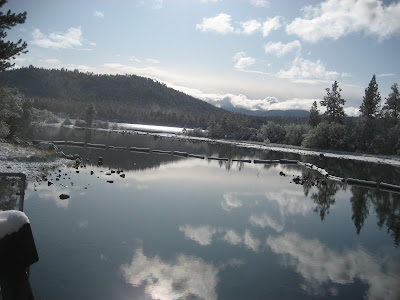 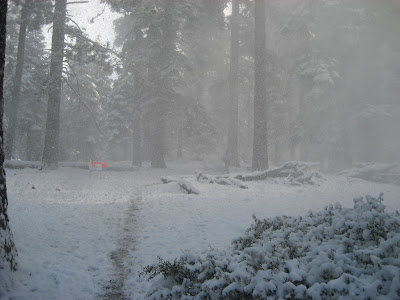 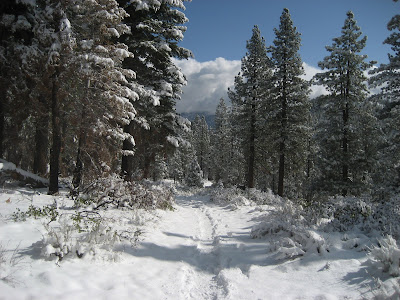 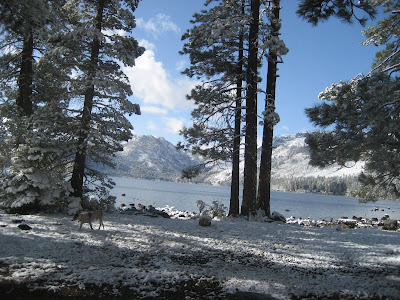 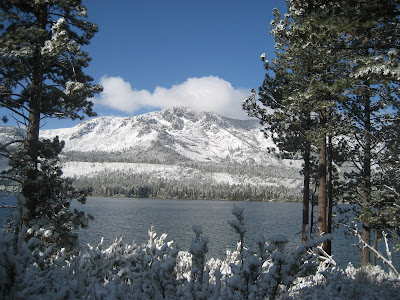 I had to pause what seemed like every 100 yards to blow the excess of snot from my nose. I'm so sorry to anyone who was running near me! It must have been gross. It certainly was annoying from my perspective. I pretty much left a slick of mucus down the entire course. Sorry folks! 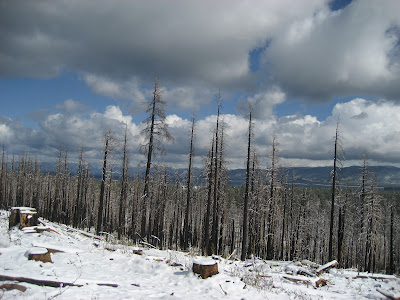 We ran through the burn area from 2007's Angora Fire. The forest of blackened trunks was actually quite beautiful under a snowy coat. 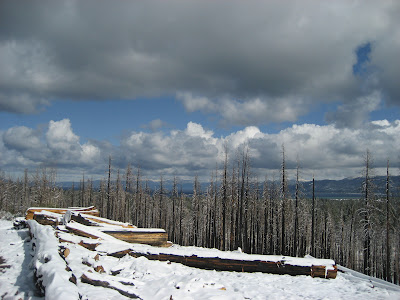 I crossed the line with more of a sense of relief than accomplishment. I was totally glad I had done the race, because I knew I would never have run that far on my own, and I needed the miles. It was also a much-needed injection of enthusiasm from friends and from the season's first snow.

We cheered the finishers and waited around for the awards ceremony, exchanging stories of the day's race. Sarah had been stalked by a man who reeked of tequila during the 10K. He had apparently been having a grand time the day before at Oktoberfest, which was taking place across the street at Camp Richardson. His primary goal for the 10K, it seemed, was to get Sarah to join him at that afternoon's continuation of Oktoberfest. Sometimes the presence of these kind of men in a race are good motivation for running faster. (Especially when they reek of tequila.) 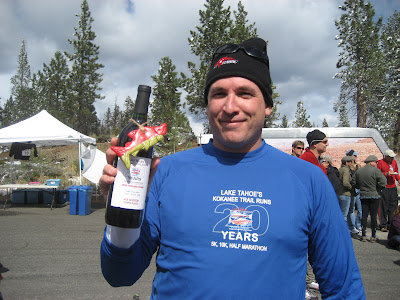 Dave takes third in his age-group in the 5K

Prizes turned out to be a bottle of wine and a Kokanee Salmon ornament. I thought this was brilliant, and lamented that it simply wasn't a day on which I was going to win one. 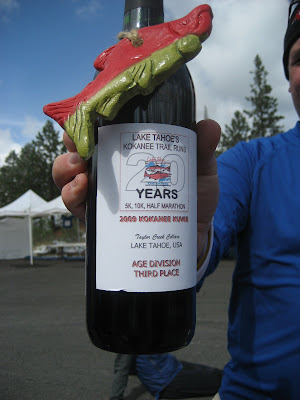 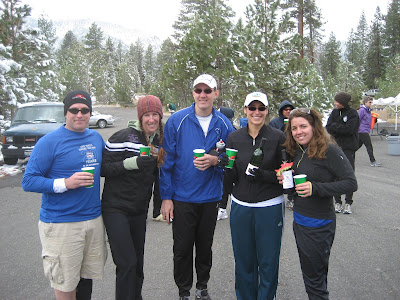 I'm pretty sure paper Gatorade cups are the preferred glass for Charles Shaw.
However, we had to wait around in the cold for a while to get the final results, so the brilliant race directors busted out a few bottles of Two-Buck Chuck and started passing them around with some Gatorade cups. That definitely kept us happy, and even a bit warmer.

We decided to end the day with beers and lunch at The Brewery in South Lake. The skies opened up, and once again we were driving through a blizzard. People were everywhere, celebrating at the outdoor Oktoberfest. I was quite impressed with their refusal to give up the party. They were drinking, dancing, eating ice cream and riding bikes, all while completely covered in snow. I suggested they had the right idea, but Sarah forbid us to join them for fear of running into Tequila Guy. As it was, The Brewery was warmer and had real food. 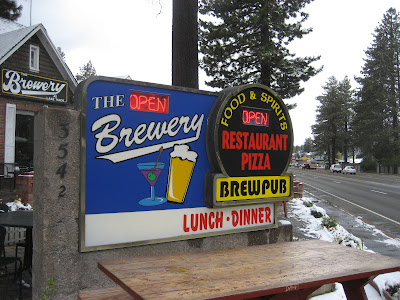 Thanks to the Reno kids for inviting me on this awesome day! You guys rock! Also, thanks to Dave Cotter for putting on the best races in Tahoe - rain, snow or shine (and for knowing when to pass out the wine).