Nathan Vest Battle of the Sexes: Intensity vs. HPL

Hey there, Gear Girl here. Today’s topic is the Nathan Intensity Race Vest.
More and more these days, manufacturers of outdoor gear are tailoring products to the specific needs of women. I love this! Gone are the days when I must wear men’s mountaineering boots or a climbing harness built for someone with big thighs but no hips. However, at 5’10” and a race weight of 135, I don’t always fit into gear designed for the average woman. I sometimes find myself wondering if “women’s” is just a translation for “smaller.” (And when that turns out to be the case, I frequently end up wearing ill-fitting men’s gear.)
It was with this thought in mind that I set out to test Nathan’s race vest designed specifically for women. The manufacturer describes the Intensity has having “women’s specific shoulder straps and torso length.” It also claims to “fit a woman’s body in all the right places.” Well, that sounds great to me! It also sounds rather vague. 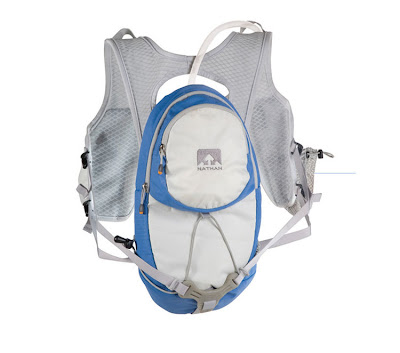 In order to test out the features of the vest, and to see if there really were any important differences from the men’s version, the HPL, I tested both packs. I felt it was important to get the feedback of some women more on the petite side of the scale than myself, so I also enlisted the help of some friends to do some comparison testing. I made the assumption that one of the intentions of the “women’s specific fit” was to keep the pack straps out of the way of the runner’s boobs. (Makes sense, right?) But since, frankly, mine don’t get in the way of much, I also enlisted the assistance of friends who were more…qualified to test this aspect of fit.
If you’re looking for a detailed review of the HPL, you can read an excellent one here by Donald. I’ll focus primarily on the Intensity, and the differences that my testers and I discovered between the two vests.
To begin, here are the basic features of the Intensity: 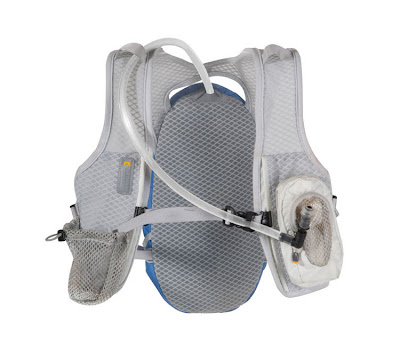 The actual size of the packs is the same, which I like. I want to carry 2 liters of water, and I want to carry just as much stuff as the guy running next to me. The main difference is in the size and shape of the vest straps.
The front straps of the Intensity are narrower. This makes sense to me, since women in general are narrower. I also noticed, upon donning the HPL for the first time, the distinct sensation of being groped. Very strange, but once I adjusted the straps the sensation abated somewhat. I also found that I just got used to it. Truth be told, I had the same feeling about the Intensity until I adjusted the straps. Still, I think the narrower straps help avoid the boob gropage, and that can only be considered a good thing while running!
The straps on the HPL are positioned for a longer torso. This also makes sense to me, since men tend to carry more of their height in their torso, while women have longer legs. (In other words, even a taller woman such as myself may not need the added torso length that a man might.) On me, the HPL rode lower on my back, but both vests were equally comfortable in this sense. 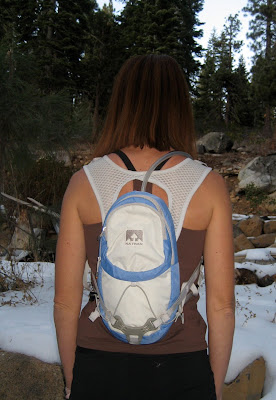 I know it's impossible to tell from these pictures, but the Intensity (above, in blue) really does ride a bit higher on my back than the HPL (below, in gray). If you enlarge the photos, you can also see the difference in how the straps adjust on the side. (But you have to promise not to look at my butt!) 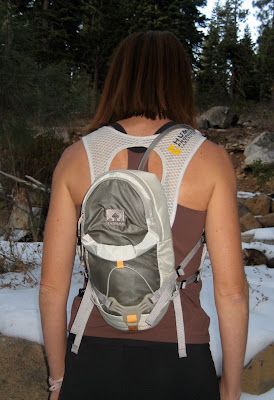 Another difference between the two packs was the ability to adjust the straps. There were two side pulls on each strap, running to the harness, allowing the runner to adjust the tightness and ride of the vest. In my opinion, the Intensity was the clear winner here. With a simple tug on each side pull, the pack was easily tightened or loosened while in use. The HPL had an additional plastic piece on each strap to keep it from dangling, but made it essentially impossible to adjust while wearing. I had to take the pack off and re-adjust, try it on again, and make sure it was even on both sides, re-adjust again, etc. I’m not sure why there was this difference between the vests, but my suspicion is that the Intensity is simply a newer design.
The front pockets were also different. The Intensity had one less pocket, and both were smaller due to the narrower aspect of the front straps. I felt the zippered pocket was not the best shape, and would be better off sitting flatter against the chest. (When it was stuffed full, it had occasion to get in the way of my arm swing.)
The other big difference was, of course, the name. HPL stands for “Human Propulsion Laboratories,” and I totally get that marketing campaign: Nathan tests their products on real people in real conditions. Very cool. But seriously, who wants a pack called the HPL? Intensity is way cooler. Hands down.
My experience with both of these vests was excellent. I loved the comfortable, adjustable fit, with no waist belt. I was impressed with the total absence of chaffing, even against bare skin. The vests are light, to be sure, but I was able to fit into either one everything I needed for a long day in the backcountry: 2 liters of water, sandwich, 2 bars, 3 GU’s, map, water purifier, long sleeved shirt, jacket, e-caps, and camera. They were a vast improvement over the previous two packs I've owned, and I’ll definitely be getting much more mileage out of them.
I think the difference in fit between the HPL and the Intensity is subtle, but important to many runners. I felt very comfortable in both vests, but all of my testers preferred the Intensity. (The smaller women had the straps on the HPL cinched down as tight as they would go.) Everyone said the Intensity had a better overall fit, and the straps seemed to ride more comfortably on the shoulders. I can’t imagine anyone not loving either of these vests, but for a medium to small woman, or a slightly bustier woman, I think the Intensity is the way to go.
And in case you weren’t already sold, Wilderness Running Company is offering you a special sale on Nathan products now through the end of this month. Just use the code nathan20 at checkout, and you’ll get 20% off all Nathan products. Yippee!
And while you’re over at WRC, make sure you go here and subscribe to their new blog. Remember that sexy little Garmin 405 that I reviewed? Well, they’ll be giving one of those away on January 15 to one lucky blog subscriber. Please go sign up, then leave a comment on their blog letting them know that you did. (Then facebook it, tweet it, etc., Pass on the love.) I would be stoked if one of my runner friends walked away with this little toy! (Plus, the WRC blog is pretty darn cool.)
Well, that’s it for now. But believe it or not, Gear Girl has more holiday gift ideas in store for later in the week, so stay tuned. 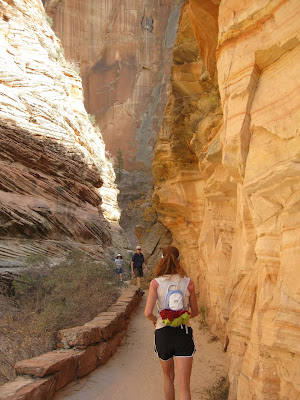