The summit of Peavine Mountain sits at 8,500 feet. Not high, really, by Tahoe standards, but it looms over the city of Reno like a sentry, guarding the edge of the Sierra Nevada from the reaches of the high desert. It draws a horizon line that dominates my twice-daily drive between Reno and Truckee, and thus often dominates my thoughts as well. Its treeless countenance takes on two shades: In the winter, it’s white—completely white. In the summer? Brown. And relentlessly hot.

But this is Peavine from afar, from the safe confines of the climate-controlled vehicle, speeding along at 70 miles-an-hour toward some other destination.

A deeper experience with the mountain illuminates an expanse of personalities. And few activities offer a more intimate experience with place than does running. This year’s Silver State 50/50 blessed us with the most winsome of Peavine’s temperaments.

On race morning, friends and I arrived at the start with just enough time to dash from the car to the bathroom to the starting line. No time for socializing—we were off! Across the wet grass of Rancho San Rafael Park, and towards the mountain, a hundred or so intrepid runners began the 50 mile journey. 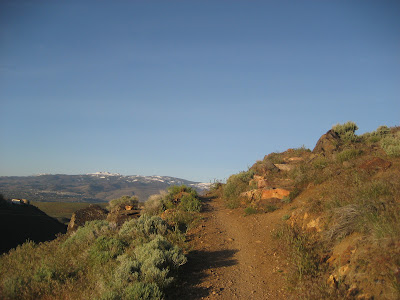 The course doesn’t mess around, and we launched into the 12-mile climb to the summit almost immediately. After a wet and chilly spring, with snow falling just four days previously, the forecasted high for the day was in the upper seventies. It sounded hot to me, but I knew it was better than snow, wind and rain any day, so I was pleased.

I spent the first several miles climbing the singletrack with my friend John, whom I hadn’t seen in months. We shared training stories from the year and upcoming race plans and goals. The miles seemed to go by fast as I locked into my steady hill-climbing pace, alternating running with walking as dictated by the terrain. The early morning light cast a slightly golden glow, and the cool air felt hopeful. 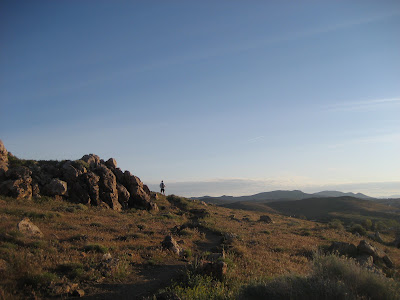 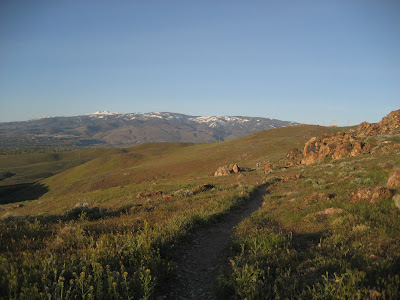 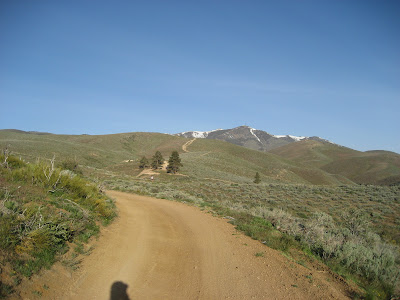 I passed through the summit aid station at mile 12.5, and it was only after I had stopped climbing that I noticed how tight I felt. My hips and hamstrings felt sore, my legs heavy, and even my shoulders felt achy and tight. The climb had given me something to focus on, and distracted me from the fact that I was feeling decidedly less that spry. 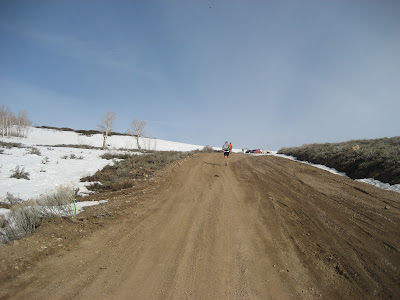 Approaching the Summit aid station at the top of Peavine.

On the Western edge of the mountain, the trail heads off onto what’s known as the Long Valley Loop. This long loop is on a beautiful, lightly forested section of trail. With its pines and granite outcroppings, it feels distinctly more like the Sierra Nevada than does Peavine. You’ve made the transition out of the desert. I enjoyed this loop, but I was running alone and I had a hard time keeping any kind of a decent pace. The heavy training miles and total absence of any sort of taper were making themselves known.

This is when I had the revelation: “Not easy is good.” The race was supposed to be training, after all, and I needed training done on tired legs. 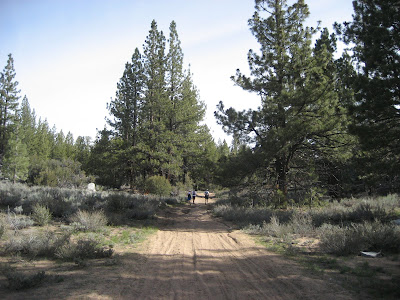 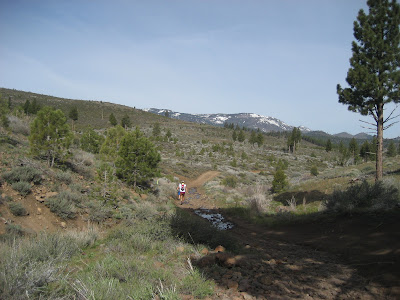 I arrived at a Hawaiian-themed aid station just as they were taking breakfast burritos off the grill, and they looked so amazing that I had to try one. It was one of my training experiments this season to try a variety of foods at aid stations. I like to eat some real food throughout a race, and ideally I’d like my stomach to be able to handle whatever happens to be available. So far, this has been a pretty fun aspect of training. (I love eating!) That was one delicious burrito! 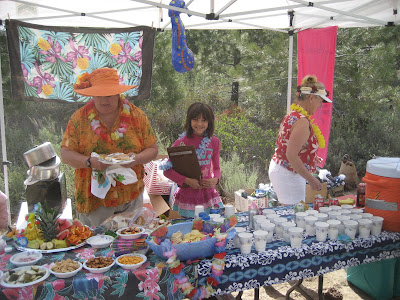 The Hawaiian aid station. What a spread! Will you look at that fruit platter. And, she's got hot breakfast burritos in her hand right there. Yum!

I climbed alone through the sparse forest until I arrived at a small aid station with only 3 volunteers. They were cheering so wildly though, I felt like a rock star. I recognized one of them as Tom Wion, whom I’d met last year during TRT while he was on his way to his first 100-mile finish. I think they thought I was pretty funny because I was more interested in talking to Tom about his experience at TRT than I was in getting on with my own race. Well, I wasn’t feeling that great anyway, so why should I care about a few extra minutes at the aid station, right? I’m such a procrastinator. Eventually I got around to hitting the trail again. 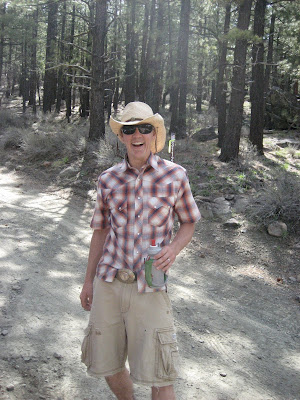 I was nearing the end of the Long Valley Loop when I hit my mental low. I was closing in on 30 miles, and I had spent the last 15 or so just feeling like lead. It felt like a stark contrast to Leona Divide, where I had felt relaxed and happy all day. I reminded myself that was because my injury had forced a lot of time off just before Leona. No such luxury in this race, and I would just have to push on through.

At Ranch Creek (mile 28) Michelline (another of the fabulous volunteers who also works the Tunnel Creek AS at TRT) was there to cheer me on. As usual, she gave me just the mental boost I needed. I told Michelline that I’d see her at Tunnel Creek, and started cruising the mellow downhill ahead. 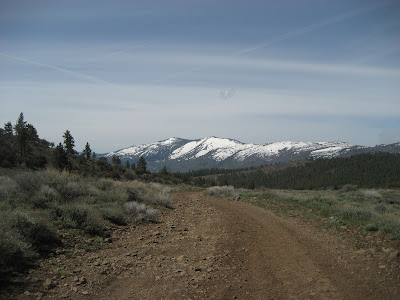 I was back on the flanks of Peavine, and picking up the pace actually had me feeling better. I followed a dirt road that traversed the slope before turning sharply downhill for the 3-mile descent to River Bend. This is a fun, singletrack downhill, in spite of the knowledge that upon reaching the bottom, you will have to climb right back up it and then some.

On my way down I had a chance to see what was going on in the women’s race. Here’s what was going on: I was getting my ass handed to me by a talented field of ladies! It wasn’t really discouraging though because I knew I was running the right pace for myself, and trying to keep up with any of them early in the race would have certainly been a mistake.

Oddly, the return trip up from River Bend was one of the best parts of the day for me. I had this conversation with John after the race, and he and I were of the same mind so I know I’m not completely crazy. I just find something enjoyable in this climb. It was something tangible to set my mind on all day because I knew it was the hardest part of the course. It was also here that I realized the temperatures weren’t nearly as warm as predicted. I’d be surprised if it ever got above 68 degrees. Perfect running weather. 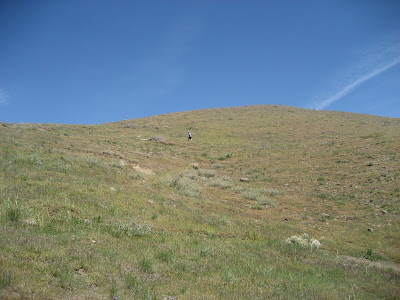 Part of the long climb up Peavine.

I focused on a solid hike, peppered with bits of running. As with most of the day, I was alone, and I was perfectly happy with it. Something about that climb made all my senses come alive. This is the slope of the mountain that I can see from my daily drive. I saw this hillside that I think of as so brown and dry, and here it was—green and alive. The rains had made everything unusually lush, and tiny flowers seemed to pop out everywhere. The sound of my breathing and my feet scuffing the dirt mixed with the birdsong, and I felt almost relaxed. The wind picked up and blew in clouds which formed occasional shadows across the open landscape.

Two years ago at this race, this climb had been the bane of the event. The temperatures soared to 98 degrees, and many runners ran out of water before reaching the aid station—a six-mile climb away. (To the great credit of the volunteers that year, they quickly set up an “emergency” water station a few miles early once they realized the problem.) This year’s conditions held the two experiences in stark contrast, and I was perfectly happy to have this mellower challenge for my day. There was also a new aid station halfway up—Sandy Hill—to ensure runners made it safely to the summit. This newer version of Silver State was much more to my liking. 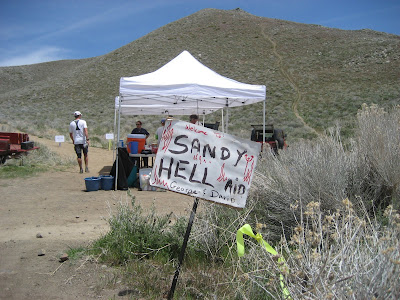 Sandy Hill aid station, aptly re-named. It wasn't hellish at all this year though!

When I reached Peavine Summit for the last time, the woman checking in runners told me enthusiastically how much I had moved up in the race. She seemed pretty excited about it and I thought it was pretty sweet that she even paid attention. I noticed the other volunteers were layering up with jackets as the cloud cover thickened and the wind picked up.

“Perfect weather for running!” I grinned at one of them. She merely smiled in agreement as she rubbed her arms and gave a little shiver.

The remaining 8 miles of downhill went pretty well. The beginning has some loose slippery stretches, but after I got past that, I found myself on beautiful singletrack. It was fairly fast running, and although I was quite ready to be done, I tried to hold a good pace. I could see that I wasn’t going to come anywhere close to my Leona Divide time of 8:45, but it was clear that I was in for a big PR for the course. 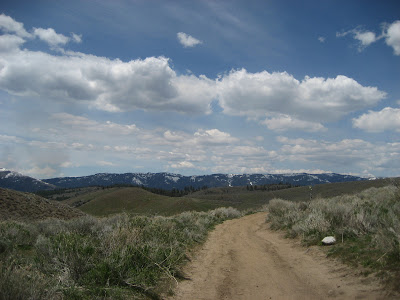 In the end, I crossed the line in 9:20, exactly ninety minutes faster than my time from 2008. My name never made it into the official results, despite some help on the matter from some kind race officials. I’m not complaining though; that’s just the paperwork. Plus, finishing 6th woman, nearly 2 hours behind badass Joelle Vaught, is only going to ruin my runner rank on Ultrasignup. We can’t have that! 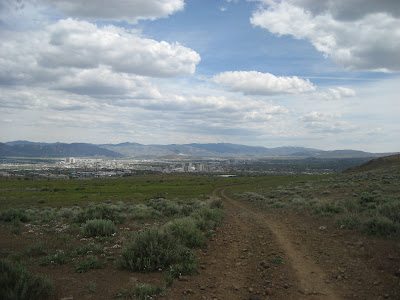 Back towards Reno, and the finish line.

The finish line was rife with friends, and we sat around eating fresh burgers and exchanging notes on the day. I didn’t really have great things to say about my performance at the time, except for the sizable PR. I simply hadn’t felt that great for the most part. In retrospect though, it makes sense given my training at the time. I’m actually happier with it from a training standpoint, since it’s all done in the name of TRT 100 in July.

The overall quality of the field at this race was impressive this year. Both races (50M and 50K) had some very talented men and women, and that somehow felt like it brought up the quality of the entire event. I’m going to go ahead and give Sean Meissner’s car the award for fastest carpool. I believe they took 2 first places, a second place and a fourth. By comparison, my carpool only took a third, a fourth and a sixth. (I’m sort of the weak link in my carpool, apparently.) We’ll get you next year, Sean!

I should also mention that in my three years at this event, this year definitely seemed the most professional and well-done by the directors and volunteers. It’s always been a good event in my experience, but this year things were kicked up a notch. The course was extremely well-marked (which had been a minor issue on occasion in the past) and the aid stations were amazing. Everyone was all aflutter over the presence of GU Roctane. I was personally a fan of the breakfast burritos and the quesadillas that George Ruiz packed with avocados. Yum!

This is a challenging course with good competition and excellent support. If that sounds like your kind of race, then you couldn’t do much better than Silver State.

Thanks to the volunteers and everyone who put this race together. It was great seeing you guys out there and feeling the love!