"A man can worship God among these great cathedrals as well as in any man-made church"
- Isaac Behunin, Mormon pioneer 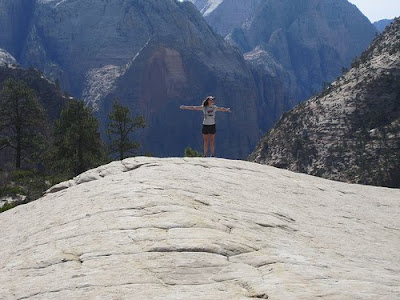 At the edge of the town of Springdale, UT, just before the entrance gate into Zion National Park, there is a little coffee shop where sunlight streams in the windows and people sit at the handful of tables, clutching steaming mugs while they plan the day's adventures. That morning, Jamie and I were among them, and we lazily devoured breakfast burritos and sipped coffee while reading through the information on our planned hike for the day: The Narrows.
"Do you really think we need all this gear?" I asked skeptically, looking up from the brochure. "Waterproof pants? And special boots?"
Jamie shrugged and took another sip of coffee.
We'd come to Utah to run through Zion Canyon after last year's trip left us both touting its wonders to anyone who would listen. If you're going to name a place Zion, it had better have some spectacular offerings, and I have to hand it to the early settlers of Utah: They got this one 100% right. There are few places on earth as captivating as the red walls of Zion National Park.
We had one more day before our planned group run, and I wanted to see a part of the park we wouldn't get to see on our run.
We discussed other options for our hike. Maybe a hike that would be less complicated than walking up a river through a narrow canyon?
"Let's just do it," I finally declared.
"I mean, we're here, right?" Jamie agreed.
It was absolutely the right call. 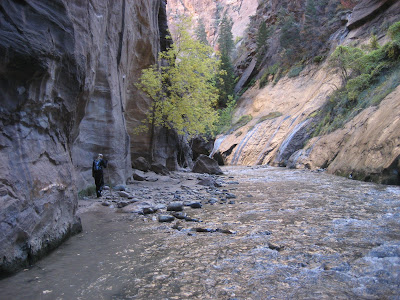 The Virgin River flows down from the high country, slicing through the earth and winding its way out the mouth of Zion Canyon. Our path would take us upstream from where the trail ends, through the walls of an ever-narrowing canyon. There's a reason this is one of the more popular and well-known hikes in the park, but since it was a Friday and not peak-season, the crowds turned out to be minimal.
Once in the park, we walked down the easy trail in our too-big dry-pants, clutching walking sticks and full of bright anticipation. After a mile or so, our trail came to an end, and other hikers found themselves forced to turn around. We felt like grand adventurers as we left the trail and stepped boldly into the icy waters of the Virgin River. 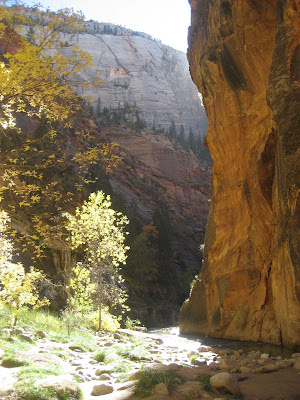 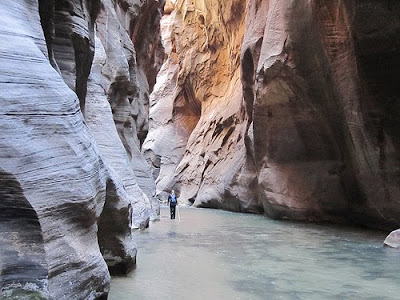 Unlike moving on a trail, walking through the Narrows is slow and requires thoughtful choices about each footfall. As we picked our way upstream, we constantly crossed back and forth from one side of the river to the other, using our sticks for balance. At times, the water was thigh-deep, and other times, we could hit a dry bank on one side and scramble over the rocks. 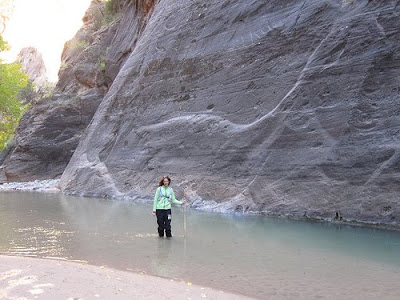 All the while, the red walls closed in, giving us the feeling that we were headed deep into the Earth itself. 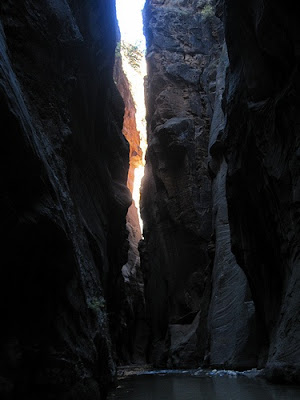 To say we were enjoying ourselves would be a vast understatement.
After the magic of last year's Zion trip, I knew it would be difficult for this sequel to live up to my expectations. Attempts to recreate a perfect experience can so often end in disappointment. It was already apparent though, that no such fate would befall this weekend. 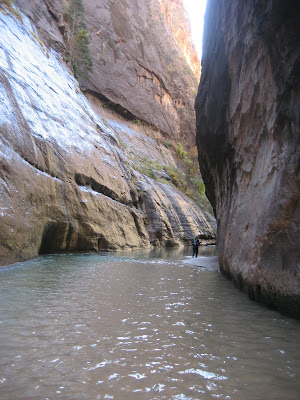 The canyon became colder and darker as we continued our casual pace upstream. The walls grew so close together that the November sun could not penetrate. Soft sounds of water lightly rushing over stone were amplified by the imposing stone walls, and conversation became minimal as we immersed ourselves in our own thoughts and the majestic beauty around us. I had never been anyplace like the depths of that red canyon. 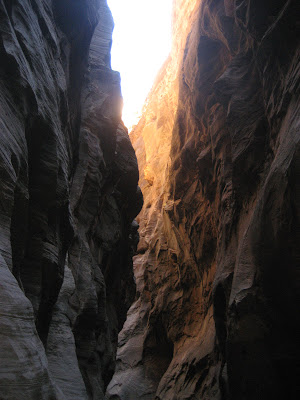 We spent about five hours exploring the Narrows, and while it is difficult to pick out one highlight from this weekend trip, I do think choosing that hike was the best decision we made. 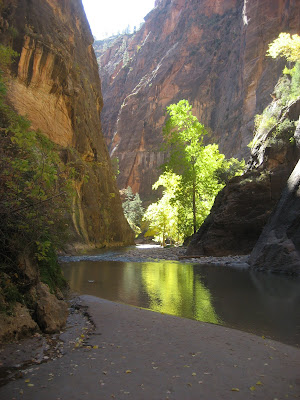 That evening we caught up with Stacy and Donald in Springdale for dinner and went over plans for the following day's run. Stacy, of Wilderness Running Company, was our logistics coordinator, and the mastermind behind both this, and last year's Zion trips. If it wasn't for him, none of us would be there. Donald - bad-ass runner, fellow blogger, friend and pacing buddy - also made the trip out from California to join the group for a day on Utah trails. After Jamie and I finished gushing about our day in the Narrows, we solidified plans to run about 30 miles the following day. Bellies full of calzones, she and I headed back to our hotel in a state of satisfied bliss, looking forward to another day of adventure in the park.
Saturday morning started early, with the four of us heading from the Zion high country down the Wildcat Trail. After about six miles or so, we would hook-up with the West Rim Trail and run the same route that we'd run on the first day of last year's trip, down into the canyon and up to the East Rim. A glowing sunrise held all the promise of a perfect day. 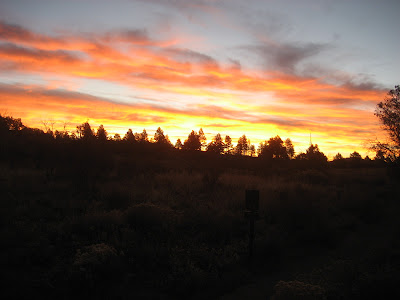 There is little better than sharing a new and glorious trail with good friends who also happen to be excellent running partners. Add to that the mild fall weather and breathtaking scenery, and it would be difficult to conceive of a better day. Once again, Zion delivered beautifully. 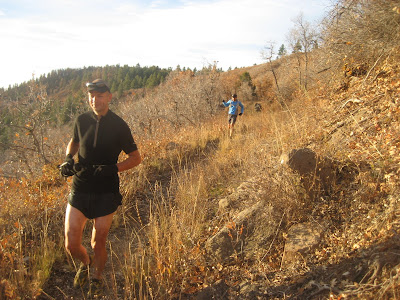 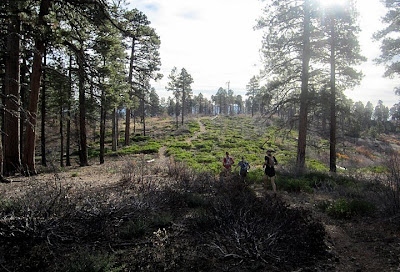 After a few miles on the West Rim Trail, the photo stops began in earnest. I figured we may as well take the whole day to run our 30 miles, right? 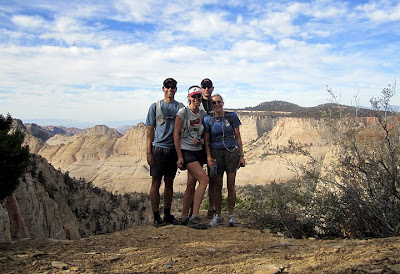 The fall leaves were in fierce competition with the canyon walls for brilliant displays of color, and I spent most of the day smiling, gawking, and making intelligent exclamations like, "Wow!" and "Oh!" and "Beautiful!"
Fortunately, I wasn't the only one engaged in such tourist-like awe. 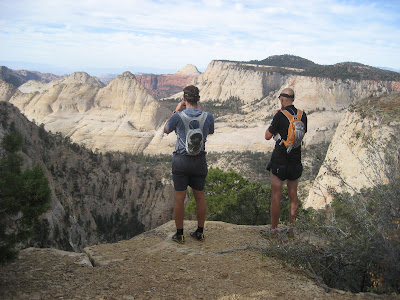 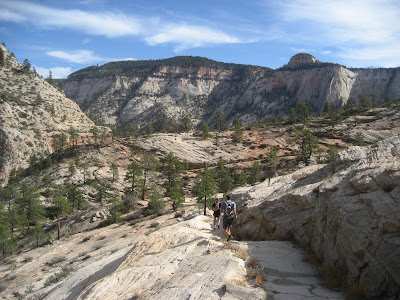 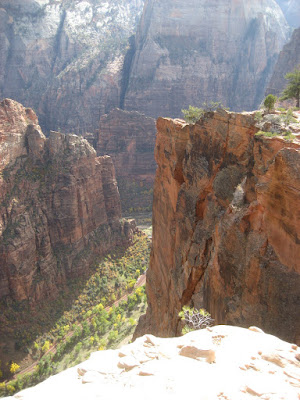 I made a brief detour with Donald out to Angel's Landing, and I'm fairly certain he set the fastest-known-time-while-impeded-by-tourist-traffic for the trip. Luckily, neither one of us fell off, and I'm pretty sure we didn't knock any tourists off either. 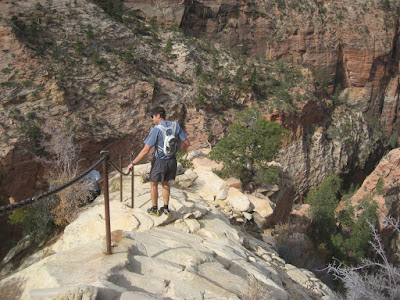 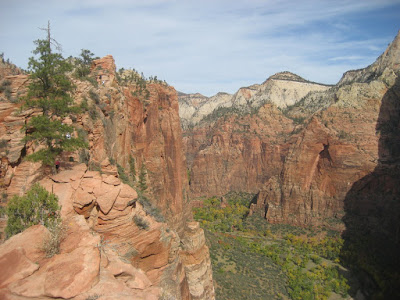 Just past the turn-off from Angel's Landing, the trail descends sharply toward the canyon floor. I chased Donald down a long series of switchbacks while I grilled him about why he never became a rock climber. If his antics across Angel's Landing were any indication, he was sitting on some un-tapped talent. I kept up my insistent pestering all the way to the river, where, just like last year, Lisa had set up a fabulous picnic for us. 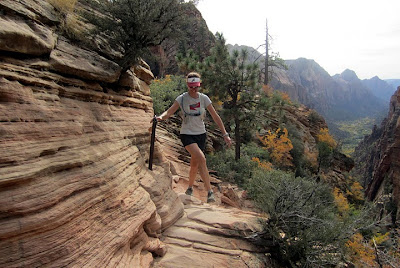 We regrouped with Stacy and Jamie while I happily stuffed food in my face. My recent training mileage had amounted to approximately zero, so my legs were already feeling the 20+ miles for the day. I knew they had another eleven in them though, and I kicked back on the picnic bench, downed a second can of Coke, and gazed up at the golden cottonwood trees, feeling both physically and spiritually sated.
As difficult as it was for me to tear myself away from that peaceful scene, I also knew the beauty of the trail that lay ahead. With both my stomach and my hydration pack re-filled to capacity, I trotted down the road a few pounds heavier, in pursuit of my three companions. 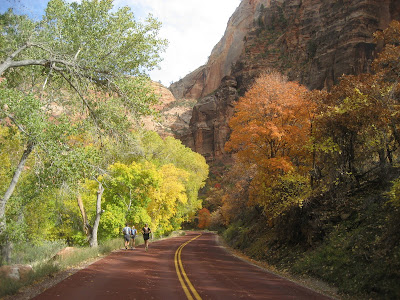 The East Rim Trail climbs quickly from the canyon floor, and I was happy enough to ascend because it meant I could walk instead of run. I still needed time to digest, and of course, take more photos. 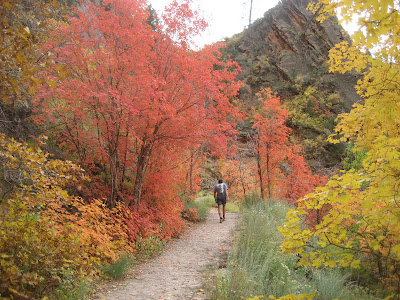 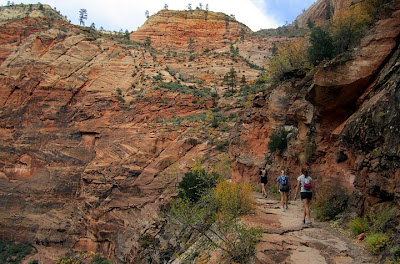 The trail headed into the very wall of the canyon, and colors changed from red to white, and sometimes back to red again. We ran along rock walls, leapt small drainages, and skirted deep gorges. The day continued its easy rhythm, each person taking the lead on occasions which felt right. 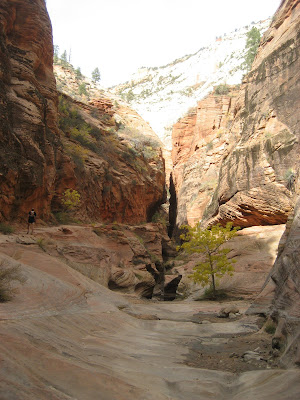 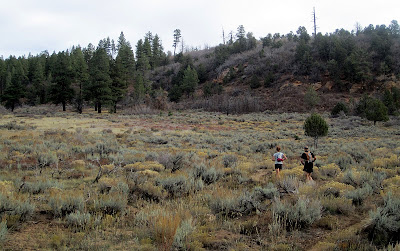 As is my way on these kinds of days, I gradually fell toward the back of our little group. I was tired, and felt no need to push myself. The need that I felt in fact, was the emotional dragging-of-feet that seizes me at the end of a day like this - a day that has been anticipated for so long. I ached to stretch it all out just a few more minutes, to soak it all in.
Donald kindly waited for me to run in the last couple miles, and we shared the trail in companionable peace. I had already begun my off-season hiatus from running, and this day was a brilliant reminder of why I would be excited to return to training in a few weeks time.
Explorations of beauty like this, when you're with friends, but yet still feel the solitude of the wilderness and a connection with the Earth that brings a sense of inner tranquility - well, these are the best days on trail, the best days to be an ultra runner. And it was these thoughts that were drifting through my mind, when, without warning, we found ourselves at the end of our beautiful run. 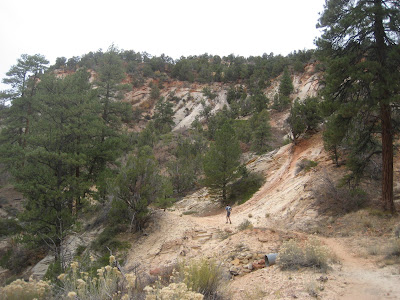 I know there will be more days on stunning trails with good friends, but days like this one are special. My trips to Zion have taught me that sometimes it's worth it to make the extra effort to go somewhere new, somewhere a little far away and a little hard to get to. Sometimes it's a great idea to travel with new people, whom I don't know that well, who then become excellent training partners, and even better friends.
Sometimes running through nature's cathedrals is the perfect tonic for soothing a tired spirit and reminding a person why she loves this passion called running. 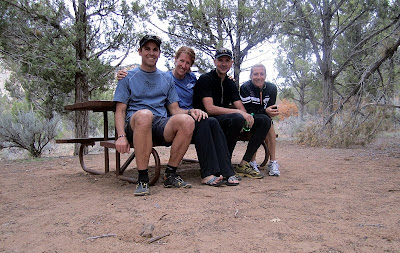 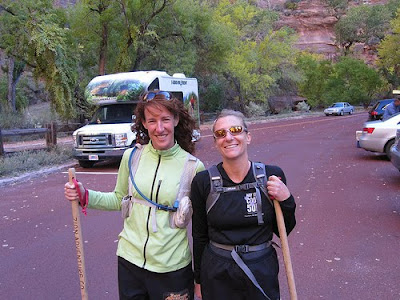