The Sound of the Sunshine Coming Down

There are certain elements that can combine to turn an otherwise typical weekend into an actual story. Beauty, excitement, serenity. Adventure, tragedy, love. Exuberant joy and connection. This most recent Saturday at the California coast comprised just such a story.
Our day arose late in a morning of coffee sipping and conversation around our friends’ Oakland apartment. Plans emerged from cinnamon-roll-sticky lips, and by the crack of noon we were unloading the car at Tennessee Valley Road – I for a 2 ½ hour trail run, and Andrew and Brooks for some hiking and beachside chilling.
I buckled on my Nathan pack and headed up the trail. My stride shortened as I aimed for an easy, efficient running pace, climbing steadily up past the stables. Five minutes into the climb and I immediately realized two things: 1) I was way overdressed in a T-shirt. Why hadn’t I worn a tank top? But seriously, who wears a tank top in February? And 2) Running uphill was easy. Wait, who do I think I am? You just started your run, chill out girl! Nah, instead I think I’ll make it a goal to run up every hill today. And so, stuffing my shirt in my pack, I ran, sports-bra clad, up and down sun-drenched, beautiful single-track next to the ocean.
Except when I saw the mountain lion. That part I walked.
“Um, there’s a mountain lion right over there.” Two women on the side of the trail flagged me down.
Errrrrrrrr! I immediately put on the brakes.

“Really? Are you sure it’s not a bobcat?” I stood on the trail looking off in the direction they’d indicated. “Can you see it right now?”
No sooner had I asked than a large cat emerged from the bushes across the hillside.
“Oh. Yeah,” I agreed, “that’s not a bobcat.”
By this point another female hiker had come up behind us, and a group of teenage girls was approaching on a perpendicular trail.
The lion was headed generally in our direction, but appeared to be veering off to the right. Most who were present decided to head for the trail from which I’d just emerged. The hiker, whose name was Lisa, and I decided to go cautiously forward together, keeping a wary eye on the cat as we went. Nothing brings two strangers together like fear of a common threat.
We exchanged pleasantries as we walked slowly forward, leaving the trail to gain more height, and thus a better eye on our feline friend. It didn’t seem at all concerned at our presence, but it also appeared to be heading away from us by this point. Lisa and I walked together for a few more minutes before parting ways, each now with a story to tell upon rejoining our respective companions. 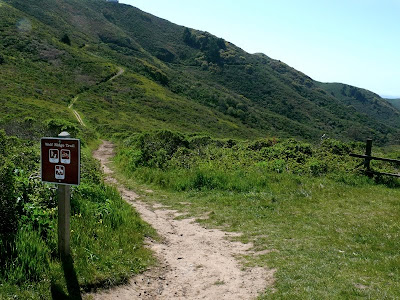 I dipped down briefly to Rodeo Beach, where families and friends were gathered in great numbers, soaking up more of this summer in winter. The breeze was briefly cooler here, and I sighed in pleasure at its touch before heading back up the hill. (Running, of course.)
I rerouted my original plan just a bit to avoid what I now thought of as “the mountain lion zone,” and headed north towards Muir Beach. The ocean lay vast and blue beside me, the sky the same above. I reveled in the powerful feel of my legs, and the oxygen-rich air. Nothing fills me with serenity more than a long trail run on unbelievably beautiful trails. My heart aches for days like these. 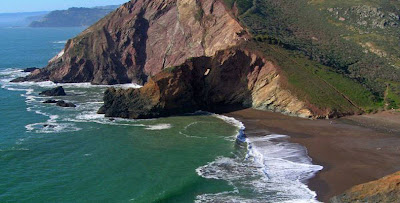 Retracing my steps along the Coastal Trail, I eventually made it back to the beach at Tennessee Cove to meet up with Andrew and Brooks. More sunshine, crashing waves, cold drinks, and good friends. Life could hardly have seemed better. It wasn’t until we’d gotten all the way back to the car that tragedy struck.
I reached with thumb and pinky to twirl my wedding band, a constant habit, and looked down, horror-struck, at my naked finger.
My gasp was enough to alert Andrew that something was wrong, and predictably, I burst into tears. Immediately Andrew went into comfort mode, and Brooks went into search mode. I got in an extra 3 miles, albeit at a very slow pace, combing the pathway to the beach and back. Done completely without hope, but still, it had to be done.
Those 3 miles weren’t so much a search for the ring, as they were a chance for me to reconcile myself to this loss with the best therapy I know: running.
Ultimately, a ring is just a symbol, and I knew it wouldn’t change anything, really. I felt thankful that I am not a flashy-diamonds type of girl and that Andrew and I had chosen unique, but inexpensive, rings.
Still, that ring had barely left my hand for ten years, and I couldn’t imagine how it had fallen off. And to be honest, I have a desperate love of symbolism. If a picture is worth a thousand words, a symbol is worth at least a thousand pictures. The more one studies literature and writing, the harder it becomes not to attach meaning to all manner of things, to see symbolism everywhere.
“But Gretchen,” he insisted, fingers laced through mine, “I married you, not a ring.”
“I know.” I sighed deeply, both in sorrow and comfort, and rested my head against his chest. Perhaps it wasn’t a tragedy after all. Perhaps it was just sad.
Over the next several hours I practiced my very best “letting go” mindset. We had plans for our evening and it would be just like me to feel beset with trauma to the point of wanting to stay home.
But no. We were going to The Fillmore to rock out with Grace Potter and the Nocturnals. And rock, we did. Right along with Grace. 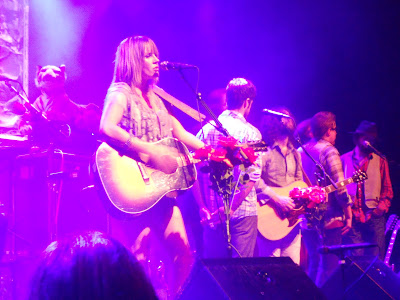 I have often wondered if movement isn’t the purest form of expression, and if that, in turn, doesn’t somehow explain my drive to run. To keep running and not stop. And when you pair movement, in the form of dance, with the depth of expression available in music, the combination can be intense. Almost as jubilant, joy-filled, and therapeutic as running.
I danced my ass off Saturday night.
Another thing that brings strangers together, besides that common fear thing, is common joy. When you look around and everyone else is jumping just as high, sweating just as hard. You know they’re feeling the same excitement, and the collective energy boosts you all up just a little bit higher. 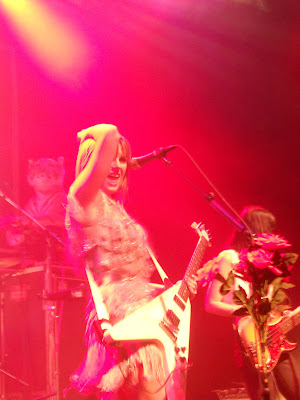 If you’re familiar with Grace, and you’ve seen her Ooh La La video, you know the woman is the very definition of sexy. And while her best songs Saturday night were her own, I also particularly enjoyed her Journey/Heart/Jefferson Airplane tribute.

Waves crash, tears stream and sweat pours. And it's all filled with the sound of the sunshine. While I’m still meditating on the symbolism of a lost wedding ring, it seems safe to say that joy and love outshone sorrow on this sunshiny, California weekend. That’s good, because I’m a sucker for a happy ending.
“It could have been worse,” Andrew assured me. “You could have been eaten by the mountain lion.”
“I know,” I whined, unconvinced. We were standing in the parking lot at Tennessee Valley Road, trying to leave. I was still crying.
“We can get new rings,” he tried again.
“Okay,” I agreed slowly, wiping a sleeve across my soggy face.
“Maybe,” I added after a pause, “we should take another honeymoon, too. You know, to make it official and all.”
“Definitely,” he agreed.