Escape from Prison Hill Half Marathon 2011

Author's note: If you're looking for my Miwok 100K report, this clearly isn't it. I have to confess that between end-of-the-school-year-craziness at work and training, I'm just exhausted. Sleep has moved up my priority list, and blogging has fallen off the bottom of it. Miwok was epic, and there WILL be a report on it. I'm just playing a little catch-up here. Look for it early next week!

Saturday morning dawned clear and cold in Carson City, Nevada, as it typically does for the Escape from Prison Hill Half Marathon. I’ve run this race on three previous occasions, (in 2006, 2007, and 2009) so I know a thing or two about the course – mostly, that I LOVE it. What I didn’t know this year was that it had changed.
“Backwards?” I gawked at Abbey after she delivered the news, 15 minutes before the start.
“Yeah,” she nodded serenely. Clearly I had not looked too closely at the website this year.
My initial thought was disappointment because I love this course so much. It’s hilly, sandy, technical and beautiful. How would the reverse in direction change things? Where were the hills now? I had no idea. I also had no time to really think about it as, soon enough, we were off the start and headed down the dirt for 13 miles.
One thing was clear to me right away: I was running much more aggressively that I had in previous years at this race. It wasn’t intentional, since I had no game plan for the day. It was just what felt right.
At about mile three we found ourselves running up a long, steep hill. My breathing came fast and desperate, and my heart hammered in my chest like it was trying to find a way out. I was a little concerned. Why was I running this hard? Sure, it’s only 13 miles, but it’s hardly a 5K! Oh well, I told myself as I passed another woman to move into second place.
I recovered almost instantly as soon as I reached the top of the hill and was in fine form to fly down the other side. I could no longer see the first place woman even though I’d used the climb to close in on her. It turned out that she dropped somewhere near the top, but I didn’t figure that out until later. The downhill was technical and it took all of my focus to maintain speed while remaining upright. Although a number of men passed me, I didn't fall and felt my downhill efforts were successful!
By the time I passed the relay exchange at the halfway point I realized I was in the lead. (People kept telling me, and I finally started believing them.) It didn’t matter too much though; I knew I was going to stay aggressive and run hard the whole way regardless of competition. Why? Because it was So! Much! Fun! I was truly having a blast at this race. 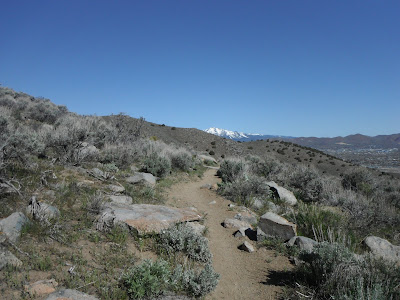 During the second major climb I passed most of the men who’d passed me on the downhill. Not only were they very gracious in moving aside for me, but I exchanged compliments with all of them. It was a very supportive group out there! We weaved our way through sagebrush encroaching on narrow desert singletrack and squinted into bright blue skies behind the snow covered Sierra. It could hardly have been a more perfect day.
By the time I hit the last 4 miles, running the technical single track at the top of the hill, I found myself moving along all alone. I kept wondering to myself why I’d skipped this race last year. I can’t remember, but I do know that I don’t plan on skipping it next year!
The final downhill into the finish was wonderful. It wasn’t too steep, and it had enough sand to absorb impact and allow some confidence in speed. I absolutely loved the speed! When I crossed the line I was all grins and giggles to see my time of 1:58. (I hadn’t worn a watch, so I had no clue as to my pace until then.) It was a 12 minute PR for the course, and I was thrilled to have broken two hours on this beast!

To be honest, I was a bit surprised with my performance. After really going for it in ’09 and coming up short, I didn’t think I would run sub-2 here. It led me to wonder a couple of things, like:
After the race I indulged in what I’m certain is the best post-race eats going: fresh, homemade breakfast burritos. Excellent! I stuffed my face while friends Peter and Bill chatted about the only two topics anyone seems to find of interest lately: minimalist footwear and how much snow will still be on the Western States course at the end of June. Tom Wion handed me a certificate for a pair of Montrails while we sipped sodas in the sunshine. I was a happy girl.
Extra special thanks to Steve, Tom and all the Stompers and Milers out there to help. I still love the course no matter which direction we run it!
~
The following day, Sunday, Jamie and I went for a long run in the canyons. I debated the wisdom of such a full weekend of running just one week before Miwok, but I just couldn’t give up a day in the canyons. Besides, the weather turned out to be perfect. Sunny and mild – quite a contrast to the previous weekend’s 7+ hours of running in a downpour.
I also mention this run because I need to give a huge shout out to the work crew who was there the day before us. There had been some mighty large piles of downed trees littering the trail in El Dorado, but clearly many of you put chainsaws and strong backs to work out there. THANK YOU!! That stretch of trail looks pretty shiny at this point, and I’ll appreciate every mile of it every day I’m out there! 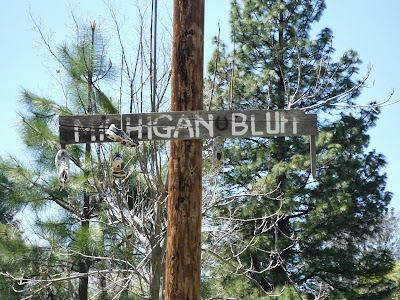