Perspectives from the Auburn Trails 34 Miler 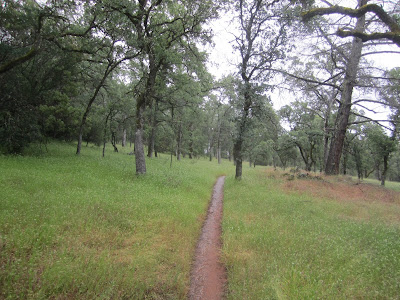 It was late afternoon, and the sound of the rain on the roof kept increasing in volume. I stretched out on my yoga mat, my back to the floor and legs straight up the wall. After six and a half hours of running that day, it was exactly where I wanted to be.
“I want to start with this pose today so that we can all think about turning things upside down a little,” the instructor explained in a voice like a soothing blanket.
Immediately, that Jack Johnson song, “Upside Down,” popped into my head. (I’m good at finding stillness in my body during yoga, but stillness in the mind still eludes me.)
The teacher asked us to try accepting things as they were. “Don’t fight adversity,” he said, “instead try to look at things from a different perspective. Sometimes that’s the only part of a situation you can control.”
I think he was referring to the endless winter, which has caused no shortage of grumbling around here recently. I’m not entirely sure though, since while he was talking, I was still singing in my head and trying to remember what came after the line “Who’s to say, I can’t do everything? Well I can try.”
Anyhow, both the song and the advice to accept difficult things rather than fight them summed up my day rather well. Circumstances weren’t exactly ideal, but the Auburn Trails 34 Miler had been absolutely brilliant!
Friday morning before race day, I awoke with a sore throat. With Western States just three weeks away, I met the situation with a heavy sense of doom. However, three weeks could be plenty of time to recover from something minor. Suddenly the prospect of running for 34 miles in the rain didn’t sound like such a wise idea. What if I gave myself pneumonia? Then again, what if I was just suffering from drama-queen-taper-paranoia? The whole dilemma just depressed me. I put the option of skipping the race on the table, and headed to bed early and undecided.
The sore throat was still with me in the morning, but no other nasty symptoms had manifested. In fact, mentally I felt great and couldn’t imagine going back to bed and not running that day. The idea didn’t sound like any fun at all. (Know what did sound like fun? Running. In the rain.)
At the start in Auburn, I had some clothing decisions to make. I had recently received a sweet little blue Power Peak Jacket from Columbia – a waterproof breathable number that I’d yet to really put to the test. It was a little much for running I thought: No matter how breathable a jacket is, if it’s waterproof, it never seems to keep up with the sweat rate of a high-octane run. However, I knew I wouldn’t be running too hard that day, (This was merely a last long training run before beginning my taper.) and I was really tired of being cold and wet in my non-waterproof windbreakers on my runs. (Remember that endless winter thing?) Plus, if I was going to protect myself from a full blown illness, it wouldn’t do well to be cold and shivering all day. So I went with the jacket. It was the first of a couple of smart moves that ensured I had a great day.
The race started at the Overlook Park in Auburn, headed down to No Hands Bridge, and then did two laps on a modified Olmstead Loop before returning across the bridge and finishing back at the park. The rain came down steadily as Robert implored us to depart the shelter of a large oak and gather at the starting line. I said hi to a few friends before finding Donald, and we headed down the hill together with a small group of intrepid runners.
I had figured Donald and I might be a good match for running together that day since we would both be taking it easy, so when I lost him a few miles into the first downhill, I was disappointed. We cruised down from Robie Point along the Western States Trail, and I couldn’t help but think about what it would be like to run this trail in the opposite direction, the last few miles of Western States,  in just a few weeks time. Or, um, hike it, as the case may be. It was pretty fun to let myself get excited. 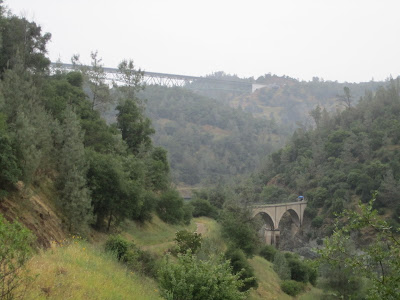 After crossing No Hands, the course headed steeply up the training hill, also known as K2. It was a good steady hike – the kind where I usually feel strong and pass people. So it was a pleasant surprise when a familiar voice from behind asked if I knew the joke about the clownfish and the sea anemone. (Well, of course I did.) Donald had caught up!
Now I had my running partner with me, and I figured we may as well stick together. That was my second smart move of the day.
As it became apparent that the rain did not intend to let up, I became more and more grateful for that jacket. My favorite feature turned out to be a little snap at the sternum that allows you to run with the entire thing unzipped for ventilation but prevents it from flapping all around like Superman’s cape. With that and the pit zips opened, I had great breathability! Later in the day I got a little colder and zipped everything back up, which worked out to be excellent temperature regulation.

The Olmstead Loop looked pretty green for this time of year, and wild flowers were still out in subtle waves of color. It was also awfully wet and more than a little muddy. We splashed along across meadows and past broad oaks. We went for long periods without seeing anything but grass and flowers and trees. Mostly, it didn’t feel like a race at all, and that was just fine with me. I couldn’t help smiling. Is there much better than a long, rainy day of stomping through mud puddles with a friend? 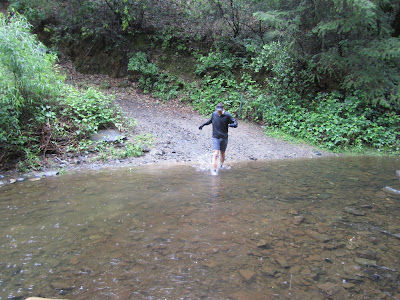 We talked about training and time commitments, reading and writing books, family, past and future adventures, Catcher in the Rye, shoes, and rabbits that poop jelly beans.
You know – the important things.
On our second lap, the puddles and streams were clearly wider and deeper, the mud more plentiful. I didn’t worry about hurrying through the pond-sized puddles; I splashed joyously. I turned to swing my leg, aiming a spray of muddy water at Donald. Hey! Where was he? Undoubtedly he'd been held up by some photography mission, craftily escaping my ambush. I just kept splashing along, confident he would catch up eventually. The return hike up to Robie Point was a breeze. I barely felt like I had even run. I suppose that’s an appropriate situation for someone who will be running 100 miles pretty soon here.
The finish area was quiet when we strolled in, the rain not being very conducive to socializing I suppose. I was ready to get into some dry clothes, while my running partner still had business to take care of. What do you call it when an ultrarunner doesn’t find an untramarathon to be long enough and needs to keep running? Ultra-ultrarunning? I know what some people would call it, but I’d say tenacity is the best word. Donald still needed 16 miles to complete his planned 50 for the day. A few minutes after we crossed the line he was strapping on his hydration pack and heading back out on the trail. Damn, that man has heart. (He’s also a glutton for punishment, but I think that’s probably a good thing since he’s training for the TRT 100 this summer.)
This whole day can be described in one word for me: Fun. Circumstances which could have made for a very bad day turned out not to be challenges at all. I was very lucky to have a friend to share the miles with, and some of my fun surely came from turning the world upside down.
“I wanna turn the whole thing upside down. I'll find the things they say just can't be found. I'll share this love I find with everyone. We’ll sing and dance to Mother Nature’s songs.”
Oftentimes, finding the fun in a situation is all about perspective. 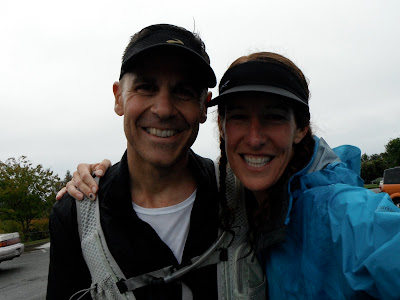 I am incredibly grateful to Robert, Linda and their team for braving the rain all day to put this event on for us. It got me out on a solid run which surely would have been much shorter without all the support. Thank you!!
Posted by Gretchen at 6/09/2011 10:35:00 PM