I stood in the early morning darkness wrapped in a down jacket and smiling at friends. A small crowd sporting running shorts and arm warmers, accessorized with a variety of hydration packs and the occasional pair of trekking poles, gathered under the pines. The casual milling-about of the runners belied the enormity of the task they were about to begin. In what has become something of a tradition for mid-July, I stood at the start line of the Tahoe Rim Trail Endurance Runs. In contrast to the previous four years, however, I would not race this day.
It is no understatement to say that this race holds a special place in my heart, having been the setting for my first ultra, my first 100, and countless training miles.  And although I’d already had my own big race weighing on my mind when TRT registration opened back in January, it still felt strange not to sign up for this race. It felt just a teeny, tiny bit sad.
Now, at the start of the 100 Mile, I felt anything but sad. Later in the day I would be at this exact spot to pace my good friend Donald through the second half of his race. Standing next to me, chatting with fellow racers, he looked perfectly at ease. I was excited for him!

Being present at the start was a bit of indulgence on my part: Donald didn’t need me here, and I’d already been offered a ride later in the day so I could have chosen to sleep in. Considering that I would be up all night pacing, it would have been the prudent choice. No one has ever really called me practical though, and I just couldn’t resist being a part of the magic on the start line.
The runners headed off into the darkness, kicking up a small dust storm in their wake. I cheered them on, mentally wished them well, and immediately turned to welcome friends who had already arrived to race the 50 Mile and 50K races that started an hour later.

After a relaxing morning, I spent time socializing at the Diamond Peak aid station. Familiar faces presided, both as spectators and racers, and I cheered friends through the aid station.

Donald came through in good spirits, stating that he felt good and thought he had started conservatively – both good things at mile 30!


I returned to the start/finish area in plenty of time to see finishers in the 50K and 50 mile events while I waited for Donald to show up. The standard ultra fare had me smiling: Some folks looked great, while others were puking repeatedly. Some 100 milers were hanging out at the aid station hoping to settle unhappy stomachs while 50K finishers sat nearby draining the keg of Sierra. I only had a teeny tiny beer with Betsy while I waited for Donald. I promise!


When you’re waiting to start pacing someone in a 100 miler there is always a certain amount of anxiety: Did I get here in time? Did my runner come through already? Did I miss him while I was in the outhouse?
None of those things happened of course, but even though I was there early, I immediately checked with the aid station to make sure he hadn’t already been through.
Then when your runner’s expected arrival time comes and goes, there’s further anxiety: What happened? Is he okay? Did he get hurt or lost? Did he come through and I didn't see him?
I knew this was all paranoia on my part, especially since his “expected arrival time” was my own ball-park estimate. Sure enough, he showed up shortly, intact and ready to hammer out the remaining 50 miles.
It occurred to me at some point during my waiting that I was not the least bit worried about running 50 miles through the dark on rugged mountain trails. Considering that 30 miles at Hardrock had completely kicked my butt the week before, this seemed a bit surprising. However, I recognized that I had several things going for me on this particular evening, such as: A) I had an additional week of recovery from Western States, B) I would be running on terrain I was comfortable with and knew very well, and C) … Well, see point “B” again. I love this course!
Truthfully, I couldn’t have asked for a better pacing experience. The night was filled with friends at aid stations, perfume from wildflowers, moonlight on snow, sunrise views over Lake Tahoe, chilly winds, and warm fires. Donald handled himself beautifully over a beast of a course, and I felt like I just got to sit back and smile at the whole experience. 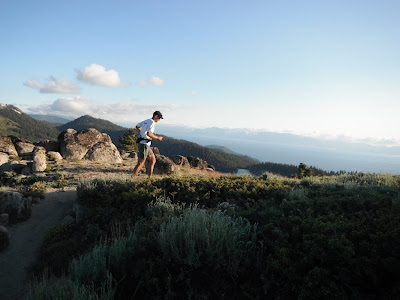 I had geared up with arm sleeves, my Icebreaker wool top, Houdini windbreaker, hat and gloves, but the night air still felt frigid – much colder than it had been at either of my own races at the TRT 100. At one point I saw a runner heading towards us dressed in a down jacket, and I did not think it totally unreasonable! I was glad I had dressed warmly, but I would have been even happier with a pair of tights instead of my shorts. I worried about Donald at first, with only a light windbreaker and gloves to add to his shorts and t-shirt, but he seemed to manage just fine, as he did with everything that night.
We both had just a bit of trouble tearing ourselves away from the fire at Diamond Peak, especially knowing what we were about to face. Two miles straight up the ski run, and Donald kept a pace I could barely hang on to. The only reason I managed to keep up was pure pride: I couldn’t let a guy with 80 miles on his legs kick my butt!

Darkness gave way to morning on the return trip, transforming the surrounding landscape. From moonglow, to first light, to full sun, the ever changing palette of colors captivated me. 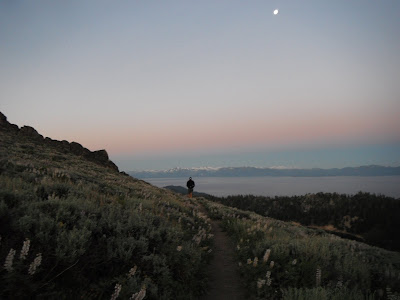 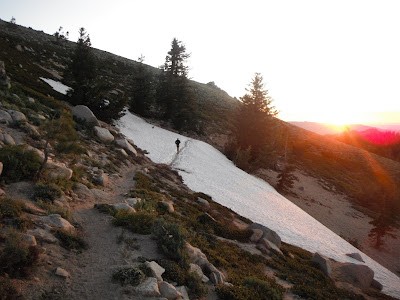 Watching Donald come across the finish line, and spending a few minutes afterward with other racers and volunteers, was more gratifying than I would have expected. I hadn't run a hundred miles, but I'd been there to witness a good friend accomplish something pretty tough. Maybe it's because I have run this 100 twice before that I felt a taste of that mix of emotions that comes with finishing it. That, along with the immense pride I felt for my friend, had me glowing almost as much as if I'd run the race myself. 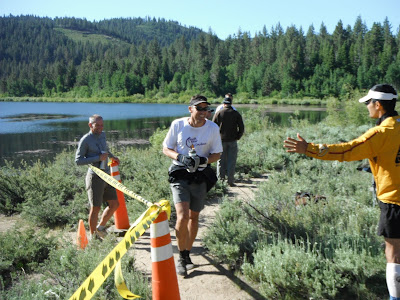 Following up my goal race at Western States with two wonderful pacing experiences was a great way to head into summer. In fact, I realized pacing is something I’d like to do more of, especially when I’m not feeling the itch to race myself. I didn’t experience any post-race depression after States, even though there had been a huge mental buildup, and I think that’s largely due to the fact that I had support roles at Hardrock and TRT on the calendar. It wasn’t until after TRT was over that I began to wonder what to do with myself for the rest of the summer.
Every time I pace someone I come away with new lessons. From Paige I learned about pacing, from Jamie about speed, and from Betsy about pure grit and toughness. Donald, he taught me about focus. There were times when he wasn’t feeling well. His stomach bothered him. He had a monster hill to climb. It was freezing cold and windy. He had to negotiate snowy slopes. But he never got down, never stopped moving forward, never lingered at aid stations, never lost focus. Even in the last ten miles, when things were at their very hardest, he seemed only to become more determined.
A brilliant example of what it takes to run a hundred miles.
Trail running for me is a journey of the heart and mind, even more so than the body, and getting to share in someone else’s 100 mile experience is a joy and a privilege. Adding pacing to my list of experiences at TRT was an excellent decision! I feel certain I'll always come back to this race in some form or another. (Next year I'm thinking about running the 50M.) Whether I'm pushing myself, or supporting others to do the same, TRT is one of the best, friendliest, and most beautiful places to do it.
Posted by Gretchen at 8/25/2011 11:32:00 AM