Pulling into the parking lot of the Overlook Park in Auburn on a Saturday morning, it was much like the start of many other races. I greeted friends as I walked across the lot toward the tables and tents. Runners were filling bottles and putting on hydration packs. It was exactly the same scene, the same place, as when I last saw Robert and Linda Mathis. They were the reason we were all there this February – to share memories, and honor their legacy by – what else? – going for a run.

I added my homemade cupcakes to the spread for the finish line pot luck and immediately began passing out hugs. It was so wonderful to see friends that I hadn’t seen for so long like Peter and Catherine. It’s truly a statement on the connections that Robert and Linda made with their runners, and the passion they shared with us all, that so many people came from far and wide for this memorial run.

Aaron Summerhays began by inviting folks to say a few words. Several people spoke, sharing what great experiences they'd had at Robert and Linda’s events. They were greatly appreciated for having generous cut off times at their races, and it just made me smile to hear about that, as I recalled Robert talking about it one day at Jenkinson Lake. He said he didn’t see any reason to pack up the finish line and tell folks they had to go home when there were still people out there running. He didn’t mind waiting.


It was wonderful to have the Mathis family present, and once they released the balloons, we were off! 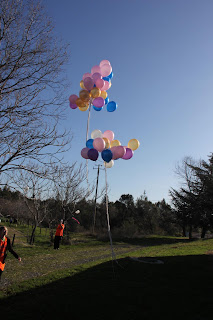 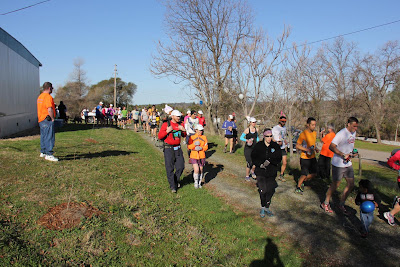 I ran the first downhill to No Hands with Clare and Scott and we talked about our days running Lake of the Sky and other ultrarunner.net races. Like the majority of people present, I sported a shirt from one of Robert and Linda’s races; mine was from River City Marathon.

I let Clare and Scott go ahead shortly before No Hands and eventually fell in with a group I didn’t know. Aside from seeing old friends, my favorite part about the day was making new friends. I met Rodney, whom I’d first spoken with just after hearing of Robert and Linda's deaths. I met Karen and Natu who are running UTMB this year. I met the ultrarunner podcast guys. Since it wasn’t a race, no one was in a particular hurry. When we approached the training hill (K2), we all decided to diverge from the marked route and go up. Why not? That’s the way Robert and Linda always made us go! 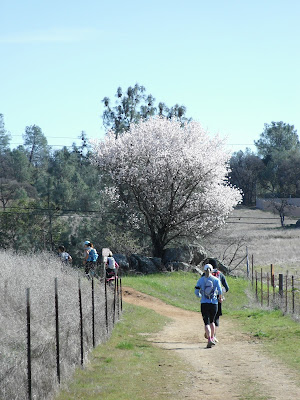 When we returned to the Overlook, there was a feast awaiting us. I was glad the weather was beautiful and we all stood around generally making pigs of ourselves and sharing stories. Bev and Alan Abbs were training for Barkley, and Alan regaled us with tales from his run there last year. Epic stuff, indeed.

I’m so thankful for the community of ultrarunners that put this event together – a community that Robert and Linda had a big part in forming. It was a perfect way to honor them and everything they did for us.

There are plans for this to be an annual event, and I love that idea. I can’t imagine much better than being here every February, running with friends in the Auburn sunshine, remembering the couple that brought us all together.I think Robert and Linda would appreciate that.

As far as Robert and Linda’s races go, I was excited to receive an email from Elemental Running and Training informing me that they will be putting on the ultrarunner.net events. Here’s the pertinent excerpt from their email:

“ERT is proud to announce it will be assuming the calendar of events from Robert and Linda Mathis.  As many of you are aware, Race Directors Robert and Linda Mathis were tragically killed on December 30th, 2011, when they were struck by an impaired driver while crossing a crosswalk in Lake Tahoe, Nevada.  Longtime pillars in the running community, Robert and Linda directed many well-known and long-standing events, such as the River City Marathon and Half, Lake of the Sky Trail Runs, Cool Moon 100M, and many others in northern California.

While we remain deeply saddened by this unexpected and painful loss to our community, ERT is happy to report that their races scheduled for 2012 will continue, and wishes to thank the Mathis Family and friends for placing their trust in ERT to honor Robert and Linda and continue their legacy.

Registration for the River City Marathon and Half has been reopened, and the remainder of the 2012 events will reopen soon.  If you have already registered, your entry will be transferred and you do not need to take any action.  Existing race websites will stay active, but news and information will also be located here, on ERT's website.  Any questions or concerns regarding the events may be directed to Jimmy and Carmella at elementalrunning@gmail.com.

Thank you for your patience, understanding, and support as we transition these races to new management.  Given the body of work Robert and Linda leave behind, the task is considerable, but rest assured that every effort is being made to meet the highest standards of service and experience that you have come to expect from not only Robert and Linda Mathis' events, but from Elemental Running and Training.

We look forward to an exciting and successful 2012!”