It was February 3, 2006, in Claremont California, the site of the 108th annual CMS Alumni Track Meet. Not only that, but it was my first track meet in about 8 years.

The idea of an alumni meet draws snickers from some of my friends. A day where old people go back to relive the glory days? A day where out of shape athletes test their mettle against students under 22 years old who have been training hard? Well actually, it’s just a fun day to socialize with old friends. Our coach does a great job of keeping the alumni from our college track team in touch with one another, and every February a group of alumni (and alumnae) returns to attend the annual CMS Alumni Track Meet.

This meet is an event in which we, the alumni, always emerge victorious over our collegiate opponents. Well, this only makes sense, as our team includes decades of All-Americans and NCAA champions. No matter that some of us quit running competitively after college, put on a few pounds, or haven’t thrown a hammer/javelin/shotput in a dozen years or so. Although I am still running, generally just the thought of running faster than an eight minute mile triggers my gag reflex. Of course it doesn’t hurt that we are allowed to enter six runners in a four person relay, and someone from our team is the score keeper. Still, I’m pretty sure it’s pure talent that brings us the win every time. 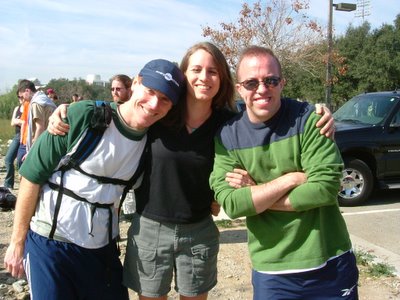 The motivation for attending this particular meet lay with my friend Jason Rhodes. A school record holder and NCAA champion in our day, Jason was being honored with an induction into the CMS Track & Field Hall of Fame. Many of my college track friends, myself included, hadn’t attended an alumni meet in quite some time. When I heard the news about Jason’s induction, I figured it was time to get the band back together.

In the last few years of my running career I have focused on running farther, not faster. While I once thought qualifying for Boston was no big deal, I now think it’s very impressive. I look at my pr’s for 800, 1500 and 5K (all run in college of course) and think they must have belonged to some other runner. On the other hand, I once thought 90 minutes was a long run. Now I can be found out on the trails on a Saturday for four hours or more. The idea of a track meet then, seemed almost like an amusing adventure.

I met up with friends at noon on a typically smoggy Claremont day, to watch the hammer throw. Among the usual suspects were Charlie and her husband Mike, Darren and his girlfriend Sara, Jason (our Hall of Fame honoree,) Brad (who frequently attended CMS meets as a coach and timer,) and Nicole and her 2 year old son. Dave and Mark showed up a little later with their families. 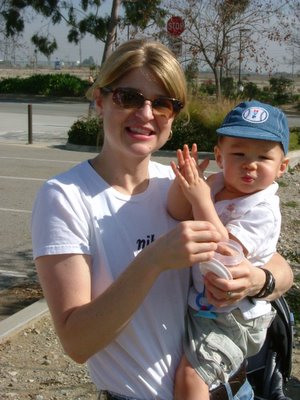 After some debate, Charlie and Sara and I decided to run the alumni mile. This is an event specially squeezed into the alumni meet that the students cannot enter. Thus, it is an opportunity to avoid complete humiliation. Of course avoiding humiliation is never guaranteed, and a mile is still, in my opinion, a sprint. But to be honest, when you don’t have any real goals at a particular distance, you really have nothing to lose. (As long as you’re not worried about your pride.)

To my surprise, our actual race was a blast. My expectations were low, as I recalled an alumni mile I had run in ’98 that was extremely painful, and so slow that I think I purposely forgot what my time was. I crossed the line in 6:11, which is slow for a mile, but I was actually quite pleased. Who knew a race could be over so fast? Darren and Mike got the award for toughness by running both the 1000 loop, and the alumni mile. I think Mike may have regretted it though. We forgot to tell him how badly it hurt to breathe after inhaling deeply for five minutes or so during a race in the Claremont smog. Brad, going on what seems like a decade of being injured, gave play by play commentary over the loudspeaker. (Those of us in the back of the alumni mile didn’t really need to have it pointed out. Thanks Brad!) Jason ran the 300, during which he fulfilled his own race prediction of running strong in the first 200 meters. (The rest of the day was filled with his own jokes about the last 100.) Nicole, Dave, and Mark all chose not to compete. We gave a half-hearted effort at teasing them about it, but our hearts weren’t really in it. Competing wasn’t actually the point. 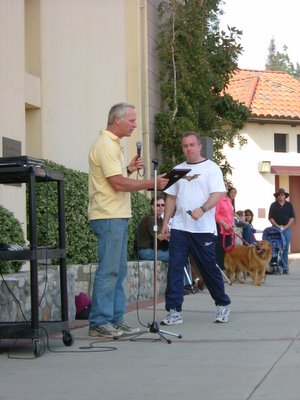 My favorite part of the day was seeing people with their families. I would have thought it might seem strange to see my friends with spouses I’d never met, and children 4 and 5 years old, but it really wasn’t. It was beautiful. I loved seeing Jennie hold her son’s hand as they ran together down the straightaway in the kid’s 50 meter dash. We ate pizza on the infield at the end of the day while I watched Mark on the high jump pit playing with Dave’s daughter Shyla, acting like a total goofball for at least 20 minutes. It just seemed like we all belonged there, on that track in Claremont. It didn’t matter if we competed or not that day, if we were a spouse or a child of an alum, if we were a student or a coach or a parent. It seemed to me that we were all at home. 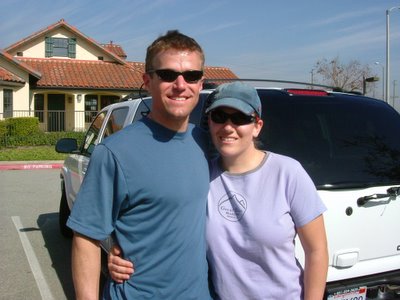 We finished off the day by sitting around Jason’s Pasadena home sharing stories. Some were classic stories, like the time Jason and Dave set Brad’s running clothes on fire, and the time a girl punched Darren, giving him a black eye. Some were new stories, like Nadeja's tale of Dave making her hike the Inca Trail on their honeymoon.
I don’t think I’ll be making the switch from trail running to speedwork on the track any time soon, but I still look forward to my next alumni mile on the track in Claremont, California, whenever it is. 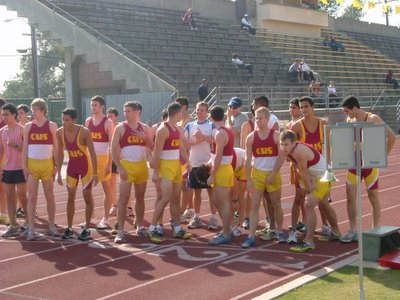 Darren and Mike toe the line in the 1000 loop, at the site of what was once "the best damn dirt track in Southern California."