Last weekend I participated in a favorite winter event here in Tahoe, The Great Ski Race. A fundraiser for the Tahoe Nordic Search and Rescue Team, it draws one of the largest crowds of skiers west of the Mississippi. This year was no exception, with over 800 participants crossing the finish line. It’s a 30K race from Tahoe City (on the north shore of Lake Tahoe) to Truckee, and it’s absolutely beautiful! 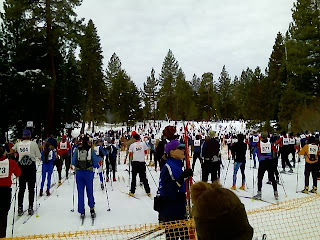 Skiers gather in the starting area

I had waited to the last minute to sign up, as there was a good chance the race was going to be cancelled. With one of the driest Januarys on record, and February not doing much better, there was essentially no snow on the course one week before the race. Things looked grim. But then we got one of those big storms that this area is famous for, and suddenly there was 9 feet of new snow blanketing nearby Donner Summit. The race was on!
I am not exactly an experienced Nordic racer, and I had only been on my skate skis once this season. My technique is shoddy, to say the least, but I knew I at least had endurance on my side. I was joined in the race by two co-workers, Mike and Ambrose, along with Ambrose’s parents. Mike and Ambrose were definitely experienced Nordic racers, and this was reflected in their seeded starts, Ambrose in wave #1 and Mike in wave #3. I myself was back in wave #5. The starting line announcer referred to us as “the cruisers, just out there to have fun.” I sort of resented this summation, as I considered myself to be more “working my butt off, but just slow.” Maybe the cruisers were in wave #6? 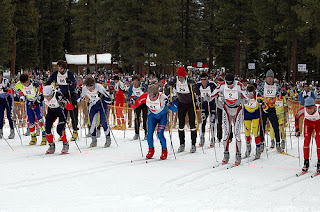 Ambrose takes off with the first wave (photo by Michael Roberts)

As I watched the first wave take off from my position back in wave #5, it was clear these guys were fast and competitive. Their technique was smooth and graceful, even while they were jockeying for position. They looked like figure skaters with long sticks on their feet. I couldn’t pick out Ambrose in the crowd, but I wished him luck as we all cheered them on. As the waves ahead moved up to the line, I spotted two girls in spangled pants with bunny ears and cotton tails. A man wearing nothing but a speedo skied up to join their wave. Even some of the faster people were still out there to have fun, (if you call skiing naked fun!) 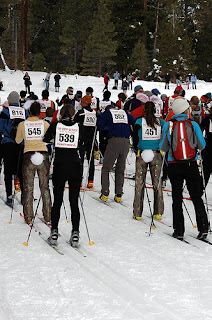 costumed skiers are not an unusual sight (photo by Michael Roberts)

With three minutes in between each wave start, I set off 12 minutes after the first wave. Skiers are not allowed to skate for the first 50 yards or so in an effort to avoid crashing right off the starting line. This makes sense from a logistical standpoint, but I have to say that double poling really sucks. Those skis were meant for skating.
The first 5K or so is spent winding through the Tahoe Cross Country Ski Area, and trying desperately to stay out of the way of fellow racers. This can be tricky, because as with the start of a running race, you are trying to pass slower racers, while others are trying to pass you. The big difference is that we are all on skis and take up a lot more space. I think the key is to remember that it is a long race, and not to get too concerned about passing people. There will be plenty of time for that. That being said, I did manage to trip over someone’s pole and go down about 5 minutes into the race. Whoops! Fortunately I got up quickly and didn’t cause a domino affect of crashes behind me.
Soon after leaving the cross country center, skiers find themselves on the long climb up to Starrett Pass. It’s not an incredibly steep hill, but it seems never ending. Not being very graceful on the down hills, I also knew that this was likely to be my strongest part of the race. I dug in, and began slowly but steadily passing other skiers. I knew once we reached the top of the pass, the hard part was pretty much over. At the top, we were rewarded with stunning mountain views and a soup station (a.k.a., the aid station.) I was skiing with a very lightly filled camelback, so I just skied by and grabbed a Twix bar off a plate; a perfect sugar boost to munch on the downhill.
There are many comparisons to be made between ski races and running races, but I have to say, the down hill is not one of them. Going downhill is unquestionably easier on skis, and it’s faster. It’s like stopping to rest, meanwhile covering ground twice as fast as you were before. And it doesn’t hurt your knees! Truly, it’s like a miracle when compared to running downhill. The trail from the 10K marker to the 20K marker is a beautiful, not too steep, downhill that goes by so fast you have to remind yourself to enjoy it before you start huffing and puffing again.
The last 10K is rolling with a little bit of everything. Personally I enjoyed the small hills because it broke things up, but I think I was the only one. The biggest challenge of the course comes at the very end. Just when your legs have turned completely to jelly, you have to negotiate a steep downhill punctuated with a series of sharp turns; a section of the course termed “the luge” by some skiers. The steepest hill of course, is right across the finish line. I don’t know what sick mind thought this would be a good way to finish a 30K ski race, but it does draw a crowd of spectators at the finish area, who are guaranteed to see some carnage. I used my jelly legs to their fullest to stay in a controlled snow plow, not caring in the least that other skiers were passing me like mad. I was just starting to get up a little more speed than I was comfortable with when I came to the steepest part of the hill. “Oh great,” I muttered aloud upon seeing the last 100 yards to the finish line.
“You can do it!” said a laughing spectator. I could tell he was just waiting for me to eat it. Why else would anyone be standing at that icy corner? Sicko! I figured he would get his due when some out of control skier came careening around the corner straight into him. It wasn’t going to be me though.
Miraculously I made it in unscathed. My time, 2:09, sounded fast to me, but since I’m not much of a racer I don’t really know what it means. I finished 361 out of 812. Not bad I guess. Ambrose crossed the line in 1:28 for 33rd place, and Mike finished in 1:33. Now that’s fast! All in all, it was a beautiful day and a fun cross training event.We got some food and beer and listened to the band while we watched the rest of the skiers cross the line, hoping to see a few good crashes. The End: the naked guy finishes with style. (photo by Michael Roberts)

Check back next week for my write up of Saturday's Way Too Cool 50K!