Saturday March 10th was the running of the Way too Cool 50K. Some people say that the hardest part of this event is just getting in. I would definitely argue that point.Yes, the race filled online in about 8 minutes. But hey, there were no qualifying requirements, no lottery system. It ain’t Boston, and the run up the hill from Maine Bar is certainly harder than any online entry process. 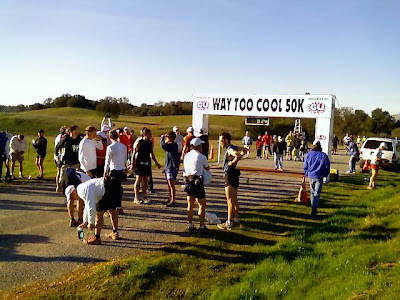 Runners get ready with 8:24 left until the start
I did discover that there is a reason the race is so popular. It’s a beautiful course, not too slow, and the weather turned out to be perfect. I was initially a bit concerned about the heat. Normally temps in the low 70’s wouldn’t be thought of as heat, but it was considerably warmer than the temps in the 20’s and 30’s that I had been training in. The longest distance between aid stations was just over 8 miles, causing me some hesitation on gear decisions. How much water would I need? Figuring I would drink a little extra water leaving the aid stations, I decided to go light, and carried just one 20 oz bottle.
I wasn’t really sure what my goals for the race were. Due to a combination of work obligations and big snow storms, it turned out that I didn’t run for almost two weeks prior to race day. Even prior to that, my mileage hadn’t been extremely high (in the low 40’s per week.) What would this mean for my run? I wasn’t really sure, and decided to just see how it went.
Living in the snowy Tahoe area, I spend many Saturdays doing my long runs “down the hill” in the Auburn area. This gave me the advantage of being pretty familiar with most of the course. The first 6 mile loop from the Cool fire station was the only section of trail I hadn’t run before. Race morning began with chilly temps, but by the time the starting line clock had counted all the way down to zero, it was warm enough for my chosen shorts and tank. This simplified things, as I wouldn’t have to discard any clothing along the way.
The race seemed crowded during that first 6 mile loop. There are about 400 runners, and many of them are fast. Fortunately we were still on roads (some paved, mostly dirt) but I still felt an anxiety that led me to try to work my way through the crowd before we hit single track. The trail was pleasantly rolling and shady. I came to the first aid station entirely too fast, about 8:40 pace, but didn’t let that worry me too much. I felt like I had been holding back, and I also knew that the roads would be faster than the upcoming single track anyway. This was where we hit the 8+ mile stretch to the next aid station. My bottle was only half empty, but I filled it up with raspberry GU2O and downed a cup of liquid at the station as planned. I also grabbed a GU and a couple squares of PB&J. Turns out I should have been more focused on getting food than water.
I had forgotten how shady and cool the canyon trails along the American River are. Heat was never a problem, and I had plenty of water to last to the second aid station. I fell in with a large group of runners who seemed to be going the perfect pace. There were maybe 15 of us cruising along, no one feeling the need to pass anyone. People exchanged a few jokes, and comments about the course. There was a request for songs, but none of us were brave enough to try our singing voices. This is one of my favorite things about ultra races. Although we are all certainly working hard, there is more a feeling of camaraderie than competitiveness.
Although the water issue was fine, I realized that I was starving with a couple miles to go until the next aid station. My two mainstays for food are PB&J sandwiches and GU. Fortunately these were all in good supply at Cool, but I seemed simply to have eaten too few. I was focused on moving through the aid stations quickly and must have skimped on the calories.
All of the aid stations at this were great in my opinion. Volunteers lined the trail as runners approached. Instead of holding cups of water they had large pitchers in both hands filled with GU2O and water. I simply opened my bottle and they quickly filled me up. They practically ran along side me while pouring so I barely had to stop. After the hungry spell I did a better job of eating at aid stations. I always ate a potato with salt and left the stations with 3 GUs and 3 squares of PB&J. I occasionally downed a coke before leaving too. I must have been pretty efficient because I always seemed to leave the stations ahead of most of the people I had come in with. 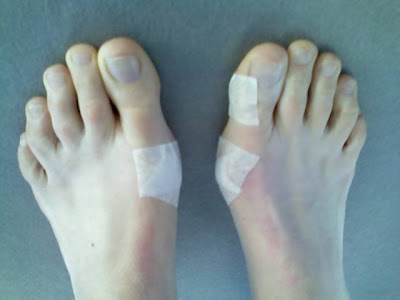 pre-taped feet (It worked-no blisters!!)
Soon I was on a loop from the Auburn Lake Trails aid station which would come around back to the same station. This was the one section where I ran out of water. It was just over 6 miles, but the temperature was rising, and it included the killer climb up from Maine Bar. I have run that hill probably 5 or 6 times in the last two years, but I still found myself wondering when it would end. Not only is this hill steep, but the footing is rough. At several points I put out a hand to brace myself. A fast paced hike had me moving past 7 or 8 runners over the length of the hill. Finally we were back at the ALT aid station.
At this point in the race I started playing mental games with myself. I felt like I was almost there because I had made the turnaround and was headed back toward the fire station. In reality I still had 12 miles to go. That could hardly be called “almost done.” I kept trying to remind myself of that. But this section is also my favorite stretch of trail in the area. It feels like endless miles of flat and slightly downhill trail. The trail is shady, footing is great and it feels fast. Things had thinned out and I wasn’t seeing a whole lot of people anymore, but every now and then I would pass another runner. I ran briefly with two women from Santa Barbara who were running their first ultra. I was impressed, as I felt like I could barely hang on to their pace. Unfortunately one of them twisted an ankle and they had to slow to a walk.
By the time I reached the Goat Hill aid station, I knew I was not going to crash and burn. I had passed a number of people on the hill, in my opinion the easier of the two big climbs, and was feeling good. From there to the last aid station the trail is still moderate, with a lot of flats and easy down hills. The grass in areas was a brilliant green, and a few wild flowers were beginning to pop out along the trail. I was enjoying my last few miles.
When I reached the last aid station with 1.7 miles to go, my time was 5:10. I had no idea what kind of pace I was running, but I figured if it wasn’t all uphill and I didn’t totally die, I could finish in under 5:30. That would be huge for me, so I flew through the aid station with my hopes high. Almost immediately I found myself on a solid uphill climb. But this was a hill that I had run many times before and I knew it wasn’t long. Soon I was running the flat open trail towards the finish. My final time, 5:26, was a huge PR for me. My two previous 50Ks were 6:46 at TRT and 6:40 at Bishop High Sierra. Certainly this is a faster course than those and at lower altitude, but I was still psyched on cutting about 1:15 off my best time for the distance. There were still several climbs on this course that forced a walk, and several descents that were steep enough to do the same.
It’s clear why Cool is such a popular race: the beautiful trails, the great aid stations, the friendly runners. I have my calendar marked for the online entry next year! (December 9th 2007, 8:00 am sharp)
Posted by Gretchen at 3/28/2007 07:40:00 AM