I’ll never forget my first race shirt. It was from the Orange County Cross Country Invitational in 1987. I wore that shirt until it had holes in it. Then I kept wearing it. A white, cotton, ringer-T with multi-colored, neon palm trees on the front - it might actually be fashionable again. (Why do we insist on revisiting such a frightening fashion era as the 80’s?) But even if it met general fashion standards, I’m pretty sure it wouldn’t meet modern ultra-runners' race shirt standards. A somewhat surprising fact I've noticed int he last couple years: We're pretty picky about our shirts.
As ultra-runners we don’t put up much with cotton, but our love (or hate) of a shirt goes way beyond performance. From fit (like the baggie-but-short-waisted women’s shirts at AR50 last year) to color (like the pink-on-black of those Quad Dipsea shirts) we seem to be highly critical. And with so many running shirts in our closets, why not? I have too many shirts that I love to bother with shirts that are just “okay.”
It was with these thoughts in mind that I realized what great shirts I received from the four ultras I ran this year. What makes a great shirt? Well, I suppose it’s a matter of opinion. Here’s what I think …
Leona Divide 50 – April 2010 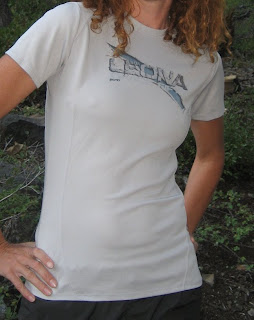 This shirt kicked off the season with what I find to be the most important feature of any shirt: a women’s specific style. I’m not talking colors here; I mean the cut, fit, and drape. I want it to be flattering. I did mention I was picky, didn't I? This shirt was fitted (maybe just a bit too fitted – I could have gone with the medium instead of the small), a non-dirt-showing gray, and with a decent logo. My only complaint is that the fabric is just a bit thick, which means it stays in the closet on warm days.
Silver State 50 – May 2010 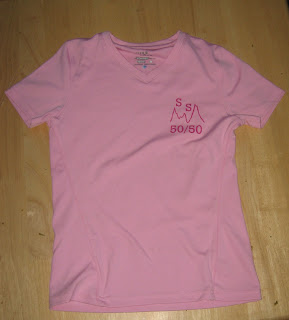 This was definitely the girliest of all the shirts. The cut was perfect, but the pink color was just a bit too pink for my taste. Still, I loved this shirt except for one major flaw: It had a scratchy tag. This tag was on a seam that comes across the abs, and it bugged me, so I cut it out. Big mistake. Now there is an even scratchier piece of “fringe.” Dangit! But I’m hoping after a million washings it will soften up.
Tahoe Rim Trail 100 – July 2010 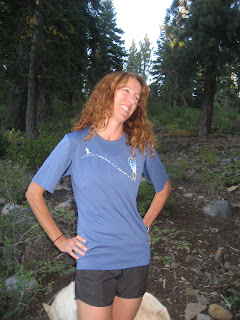 This shirt scored big points for being a Patagonia silkweight capilene. Best fabric ever! (Well, except for Icebreaker, but we can’t hold our standards that high, really.) It also has a cute logo. Nice job, TRT! Unfortunately, this one doesn’t get a lot of use because it’s not a women’s shirt. Boxy and big—it’s simply not cute on me. Guess what? Women don’t really like to wear men’s shirts. Funny, huh? Still, I wear it running sometimes under my hydration pack. It will likely get a lot of use in the backcountry and as a layering piece in the winter. 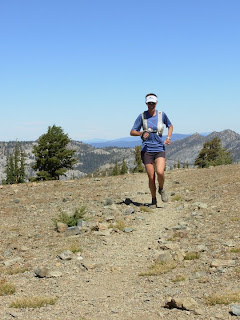 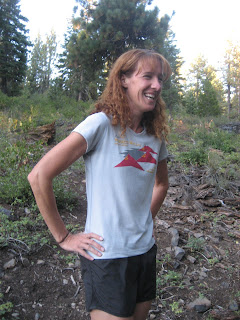 I consider this shirt the big winner of the year. I have zero negative things to say about it. If you have seen me out on the trails in the past month, there is a 90% likelihood that I was wearing this shirt. Yes, this means I have to do laundry frequently. Or else it means I’m kind of smelly. I won’t say which. But regardless, this shirt has it all: A comfortable, flattering fit (women’s styling, of course); light, airy, Sporthill fabric; that "doesn’t-show-the-dirt" gray; and a cool logo depicting the major climbs of the race. Beauty and performance! What more could a girl want?
The races out there just seem to get better and better. As do the shirts. I do, however, feel strongly that a good shirt is of secondary importance to the overall quality of the race. I was one of the few people that did not complain about receiving no shirt at TRT in 2009. Hey, give me a Buff and a coffee mug! That’s cool! But when a race shirt scores big, like these did for me this year, it’s pretty fun. They may not get as much use as that OC Cross Country shirt did, but they also have a lot more company in my closet.

What’s important to you in a race shirt? Does it matter what kind of shirt you get at your race? Do you have any particularly loved or despised shirts from recent years? I’d love to hear about them!
Posted by Gretchen at 9/22/2010 10:22:00 PM