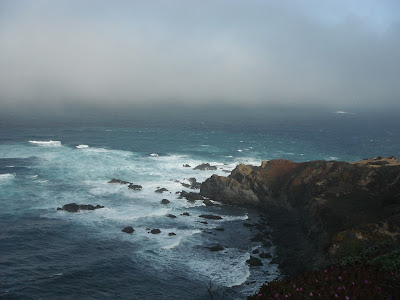 When one of your dearest friends, whom you haven’t seen in years, has what we like to call “a significant birthday,” and her plan to celebrate involves you, the California coast, and a long run … well, it’s a sure sign you’ve made (and kept) the right friends in your life.

Charlie and I go way back to my freshman year of college and the rather naïve age of 17. She was that elusive training partner that we all seek – the one who can match you stride for stride, who pushes you, who competes next to you, who understands you because in many ways she is you. College track and cross country was a springboard for our friendship, but it was also at the heart of it. We are runners, both, whether we have been running many miles or very few.

When discussing possible race choices for this birthday event, we settled on Big Sur largely because it’s considered to be a slow course. We figured if we could let go of the desire to run a PR, we’d have no issue running together even if our training put us at different ability levels.

Back in the old days, Charlie and I trained for, and ran, our first marathon together. We did the same at our second marathon. There was no question then that we would run together and that our best efforts would match, no question of someone needing to run ahead, and no question of wanting to push ourselves. Of course we ran our hardest! That’s simply the way it was.

Sixteen years later, and our only goal is to run together again. Sixteen years of changing jobs, different houses, marriages, kids, periods of intense running, and periods of time away from running. It wasn’t about speed this time. It was just about us. Big Sur offered the perfect opportunity: a beautiful setting with no need to worry about running fast.

By the time race day rolled around, Chuck had spent most of our training months emailing me with updates about her calf injury. Mileage for her had been minimal as a result, but I really never questioned whether she should be trying to run a marathon on so little training. She was the girl, a year ahead of me in school, who had always set the example for me of exactly how to be a badass. There was simply no way she wasn’t going to run this race with me – she was my own personal map to badassery.

The 3:00 A.M. wake-up would have been normal for an ultra, but it seemed unusually cruel for a marathon. Also cruel was trying to cram the entire marathon field into a rather small parking lot for an hour where the only entertainment was waiting in line for the port-a-potties. I did manage some good people-watching, noting attire choices like Sponge-Bob pajamas, numerous colorful tutus, your standard garbage bags, and one man keeping warm in what was clearly his hotel bathrobe. And people think ultrarunners are weird.


Given Charlie’s concern about even being able to run 26 miles, I took the ultrarunner’s approach and planned on a strict 10min/2min run/walk schedule.  We lined up in a conservative position between the 5-hour pace group and 5:30 pace group. As far as I was concerned, we may as well take our time, enjoy the scenery (and excellent company), and (hopefully) not further any injuries.

Soon we were off on the best possible mode of transportation for exploring and adventuring.

I vowed from the beginning to take pictures of everything I saw, but one thing I had a hard time keeping up with were the musical acts; there were so many! However, if there's one thing I love, it's kids playing music, so I did not miss this first act - a high school band showing their stuff! 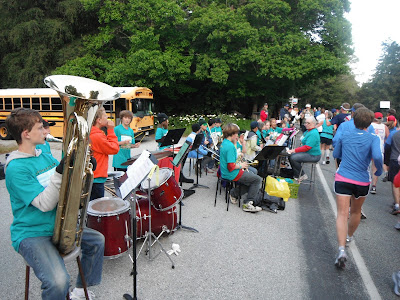 Here's the super awesome River Inn that let us all in to use their bathrooms. I think perhaps that's the privilege of being at the back of the pack. The fast people were too impatient to ask. 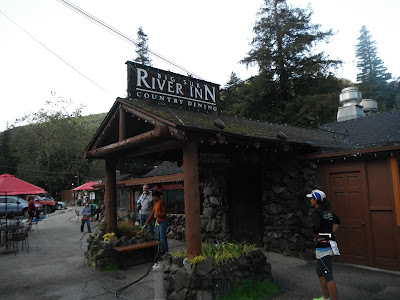 The mile markers were all decorated with plywood scenes, some of which were pretty funny.


With our run/walk schedule, we played leapfrog in the first several miles with the 5-hour pace group, which was being led by ultrarunner Whit Rambach. I wand to sidle up to him and grill him with questions about Hardrock since I knew he'd finished it, but as seems to be typical in these road marathons, things were particularly crowded around the runner with the pace sign. He was also busy playing tour guide, pointing out various sights and landmarks - a definite advantage to having a local as a pace leader.

We ran along feeling good, enjoying the scenery and the rising sun. 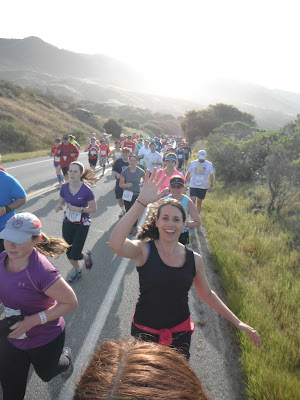 This highway sign wasn't really a good gauge of distance since we were already 5 or6 miles into the race at this point, but it seemed appropriate that it would be a marathon to get back to our hotel in Monterey. I was thinking perhaps a run to Santa Cruz might be nice?

I kind of wondered about the choice of cows on this mile sign... 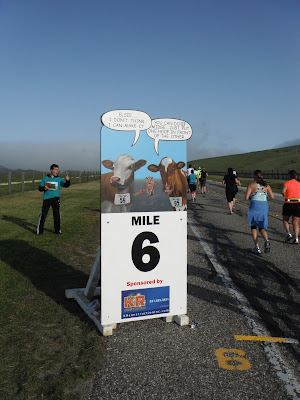 And then, a quarter mile later, it all made sense. 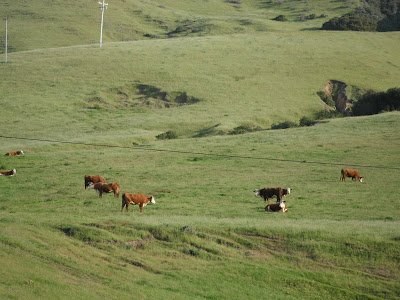 This was another group of high schoolers playing music, so I was sure to get a picture ... 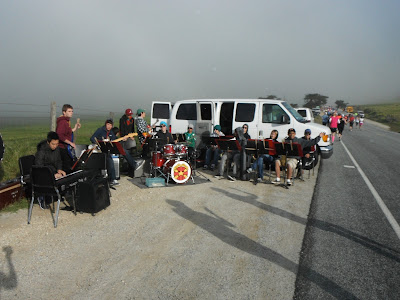 I'm giving them jazz band status vs. marching band, based on their numbers and instruments. They're the rock stars of their school. They were pretty much rockin' out when we ran by.

As we neared the coast, we began to encounter fog, hills, and headwinds in earnest. 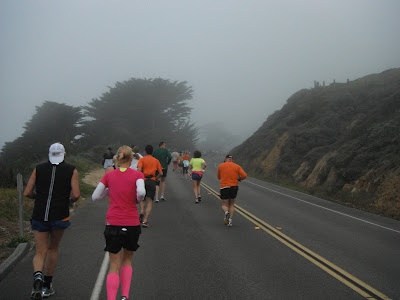 These things were never really that bothersome though. Perhaps because the scenery began to look like this ... 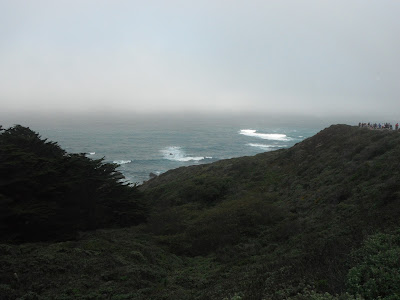 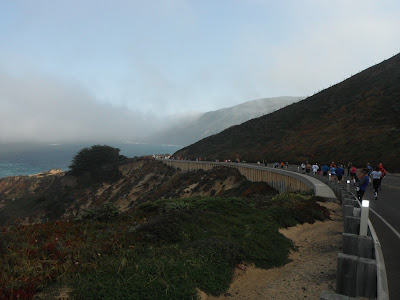 Mile 9, after a solid hill climb, was the sight of my favorite mile marker sign ... 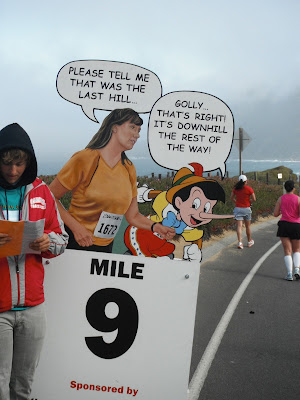 The only problem was, I thought it was so funny that it raised my expectations for the rest of the signs, and none of them could live up to this one. That just shows you what my sense of humor is like, I guess.


The next hill looked pretty intimidating from a distance, but we tackled it without too much trouble. It was long, but not terribly steep. 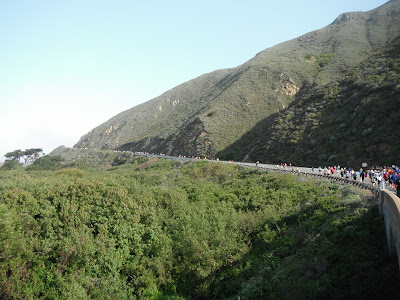 The rhythmic sound from these drummers kept us energized all the way up the hill. 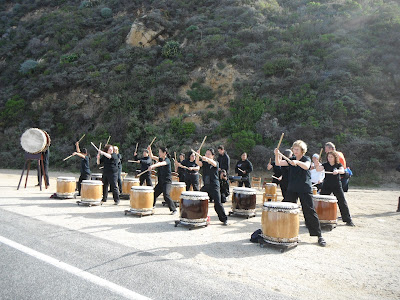 I wondered if their arms were getting tired. I figured if they kept up that much drumming during the entire race, they were getting as good a workout as we were. Maybe better. 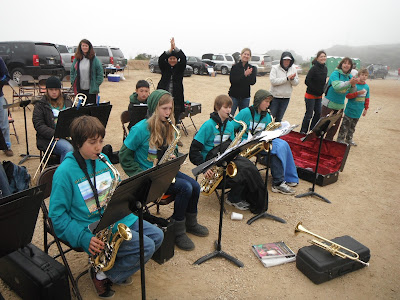 I love these guys. When I was in high school, I thought the band kids were all geeks. Now I think they are completely awesome. I think maybe I'm the geek.

We finally came upon that famous bridge. You know, the one all those pictures? We got a race program at check in, and I counted no less that 15 pictures of this bridge in it. These guys like their bridge.

But I thought it was going to be one of those things that makes a great picture from a distance, but when you're actually running across it in the race you can't even see it. Turns out, not so. 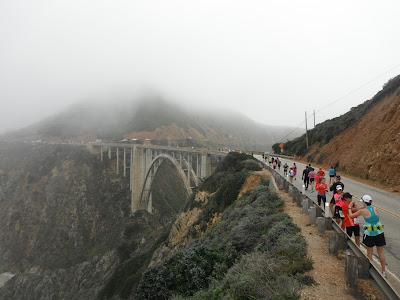 My favorite part was the realization that all of us weren't just runners - we were tourists. Looking around, I saw that nearly everyone stopped for a picture at this spot. I loved it! I wasn't the only idiot with a camera; we were all idiots with cameras! I wondered if people at the front of the race were stopping to take so many pictures. I knew right then, that this was the best way to do this race: slow, and smiling, and soaking it all in.

We could hear the piano music floating across the water long before actually crossing the bridge. And what was he playing? The Peanuts theme! I love the Peanuts! I danced my way right onto the bridge.

Exactly halfway across the bridge was the best moment of the entire day. There was a small crowed of runners stopped in the middle, cameras out. I followed their collective gaze to see a man down on one knee in front of his girlfriend. The crowd erupted in cheers and applause. She must have said "yes!"

By the time I got my camera out, he was slipping the ring on her finger, and we were all still cheering. I get pretty sentimental over things these days, and this scene had me smiling and crying and loving this race. I love love!

The Peanuts were still rockin' us down the road, and it was at this point that I let loose with the following speech.

"You know, I really wanted to run this race when I was in high school.  But then, after I became a trail runner, I couldn't figure out what all the hype was about. I was totally stuck up about it and thought this race was completely overpriced. Like, why would anyone pay that much money for just a marathon? But you know what? Now? I take it all back. I TAKE IT ALL BACK! I LOVE THIS RACE!! Wooo hoooooo!"

I waved my arms in the air as I yelled, and Charlie joined me, smiling and waving and yelling in joy.


Eventually, we started pushing the limits of Charlie's training, and she decided it was time to stop and stretch out the hips. Not a problem.

Beyond mile 17 was what Charlie kept referring to as no man's land. 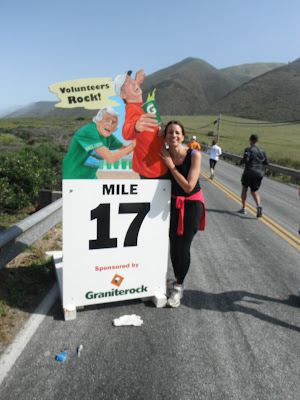 Seventeen miles was the longest training run she had completed in the last five years, according to her detailed record keeping. I think she managed one other long run in her training which was 10 miles. Not exactly high volume. She figured anything could happen after this point in the race.

What happened? We kept running. 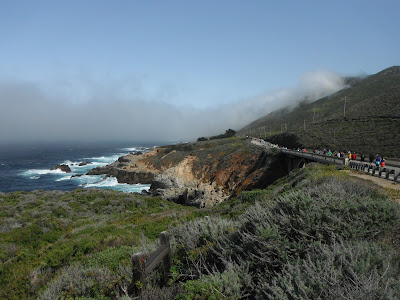 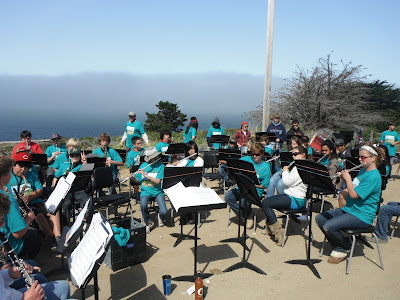 
Here I am at one of the final aid stations enjoying some ripe strawberries ... 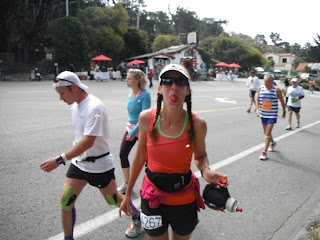 After this point, it became about just crossing that line. It was clear we were going to make it, and I was impressed that Charlie hadn't needed any more than our regularly planned walking breaks. You did catch what her training had been like, right? Yup, that's my road map to badassery right there. 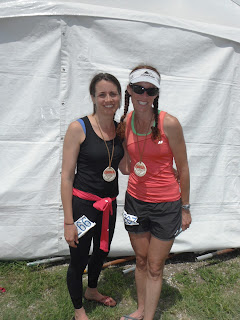 Although at one time this race sat atop my dream list, I'm glad I never ran it until now. This was exactly the way to do Big Sur - with a camera, a relaxed pace, and a good friend.