The 2012 edition of the Lake Sonoma was characterized by talented runners, perfect weather, and a wonderful community of ultrarunners.

The race began Saturday morning on the shores of Lake Sonoma just north of the town of Healdsburg. The pre-race email had stated that the start would be at 6:30 sharp, “even if you’re still in line at the port-a-potty when the gun goes off.” Of course, that’s exactly where I found myself at 6:29.

“Oh, you can hold it!” Meghan joked as she walked by on her way to the starting line. (Clearly she hadn’t read my Way Too Cool race report.) I danced impatiently, next in line. I wasn’t skipping this pre-race necessity, even if it meant everyone started without me.

Luckily, I dashed up to Jenelle at the start just before everyone took off up the road.

We started about mid-pack so the deep field of elite runners wouldn’t suck us into their fast early pace. The first two miles were on road so that runners would have a chance to spread out a bit before hitting the singletrack. 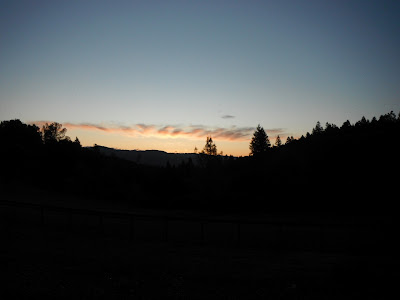 We climbed into the rising sun and everyone was in good spirits. This was to be my longest race of the season so far, and I was excited. Rather than tapering for this race, I made it a point to have a pretty solid week of training. It had been my spring break, and I needed to use the opportunity to get in some good mileage and some high quality workouts. A spring snow storm put a damper on my Thursday run, but otherwise, it all went as planned.

When we moved onto the single track, it felt like a bit of a relief. The sun streamed through the oaks, and everything was excessively green. That’s one of my favorite parts about coming out of the mountains for these spring races – the intensity of the verdant hills, the flowers, the sunshine. It’s a completely different season down there.


Everyone had warned me that this course was deceptively challenging, but I figured there’s really nothing deceptive about 10,500 feet of elevation gain. It's hard! There aren’t any serious climbs, but as you travel around Lake Sonoma, the trail goes in and out of small drainages. This means that A) There are a lot of little ups and downs, and B) You’re going to get wet. 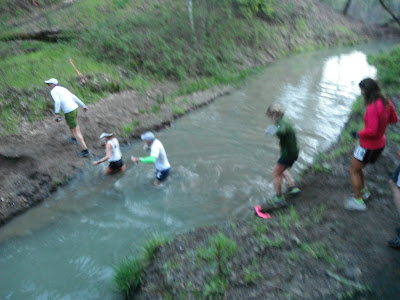 The first creek crossing is the deepest, which isn’t a bad thing. May as well get the soaking over with right away. I was glad though, that I saw others go through before me, or I might not have been prepared to get wet all the way up to my shorts!

The course was beautiful, in spite of its rugged nature. Or perhaps that just added to it. The lake views were almost constant in the early and later parts of the race. Broad oaks kept us in the shade, and the many watersheds occasionally hid secret redwood glens. 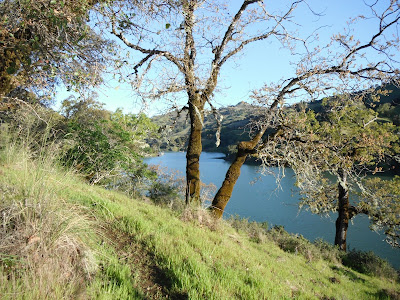 I felt good, and spent most of the first half of the race passing people. It was a good way to go because I got to chat with so many other runners! I met a ton of new people and had a chance to briefly catch up with some old friends.

I was only three and a half hours into my race when Dakota Jones came screaming toward me on his way back to the finish. He looked strong, and hot on his heels were Tim Olson and Jorge Maravilla, who wore a big smile. It was fun to see all the race leaders charging. Joelle Vaught came bounding down a hill just chatting merrily with another runner. She seemed like she was having a blast, and I couldn’t help but smile. Some people make it look so easy. 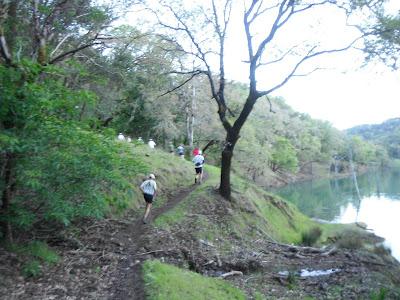 I felt strong, and I wondered if I might not be running a bit too fast. I figured there was only one way to find out and just kept running.

There’s about a one mile loop at the turnaround, so you don’t get to see every single runner come by. I was excited then, to see Clare coming toward me shortly after I’d left the aid station.

“Clare!” I declared. “I thought you were ahead of me this whole time!” We exchanged brief words of encouragement as we ran by. A few minutes later Jenelle and I did the same. 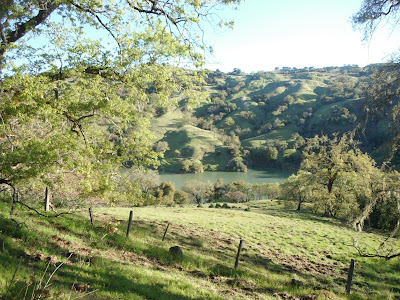 I continued passing folks on the return trip, but now they were much fewer and farther between. I left the mile 30 aid station with Keira Henninger , whom I’d caught on the preceding climb.

I laughed. I mean, Keira is this beautiful SoCal runner babe, so it struck me as a little ironic that she called me cute. Still, my one previous experience meeting Keira told me that she is incredibly sweet, so I knew she was being sincere.

We chatted, and she gushed some more about how cute I am, and I laughed. Eventually I figured out that I was not who she thought I was, and I had to interrupt her.

“Um, … I’m Gretchen,” I explained shyly. Would that even mean anything to her?

Turns out she thought I was Sarah Lavender Smith. Well no wonder she thought I was cute! I ain’t got nothin’ on a girl who can do a cartwheel across the finish line to win a 50K. But I get it. It’s the pigtails.

As we headed into the downhill she started to pull ahead of me, but our parting exchange rang with me the rest of the day.

“Gretchen,” she yelled over her shoulder, “if we push, we can finish in under nine hours!”

“Nine hours?” I screeched. “No way!” It sounded impossible.

“Okay, I’ll give it a shot!” I yelled at her swiftly receding form.

And I did. I thought “sub-9” as hard as I could. I kept Keira in sight for a little while, but she kept gapping me on the downhills, and eventually it became a solo mission.

I was pretty sure I could run the necessary pace to break nine hours, but I was really struggling to stay focused. The miles were lonely, and I kept zoning out and subconsciously slowing. I’d snap back and pick up the pace, but it was a struggle. Miles 35-45 were pretty tough, and a look at my splits confirms that this was the low point in the race for me.

I was still passing folks heading out in the opposite direction, and I did my best to cheer them on. I knew their day would be much tougher than my own. One older woman gave me a delighted smile and returned my “good job.” I could just tell she was loving her day and it made me smile. I found out later it was Eldrith Gosney – 70-years-old and running 50 miles! Oh, Eldrith, when I am 70, how I hope to be you!

When I at last reached the final aid station with 4.7 miles to go, I could see that I wasn’t going to make sub-9. I declared it to a volunteer on my way out of the station.

His words were encouraging, but his tone of voice agreed with me. It wasn’t going to happen.

At the final creek crossing, I caught up with some other runners. At last! Someone in the group had a Garmin on, declared that it was 3.5 miles to the finish, and that sub-9 was totally doable.

I charged down the trail with energy I didn’t know I had left. Leading a small train of runners who were ready to push was all I’d needed. We flew.

Whenever we passed another runner, we encouraged him to join us. Some did, I think. I couldn’t look back for fear of eating it on the downhills. All I know is that I was suddenly feeling fabulous and running absolutely as fast as I could.

We passed Keira and I really wanted her to join us. This whole 8:XX thing had been her idea in the first place! But she’d taken a fall, and I think it had her too bummed out to run aggressively.

Garmin-guy declared one mile to go, and I checked my watch to see that I would have to run it in 9 minutes. Crap. Nothing was flat in this race, and I knew I didn’t have it in the bag yet. I started to feel a little dizzy and nauseous on the climbs and let a few runners go ahead. I could hear the finishline, but I didn’t dare look at my watch. I was afraid that it would tell me I wasn’t going to make it, and then I’d give up and slow down.

It felt like I was in a full-on sprint when I rounded that last corner to see the finishline clock ahead showing 8:59. I had just a few seconds left, but they were enough. It was another one of those big-smile-finishes, just like at Napa. I was stoked. 8:59:36, and 10th woman.

It took about 20 minutes for the fog to clear and the burning sensation to leave my legs. By the time I changed into some dry clothes I felt capable of being social, and Paul and I exchanged notes on our races. He’d had a good day overall but had faded toward the end. We discussed how so often it’s how you run in the final miles that leave you with your predominant feeling for the day. I’d faded in the middle but finished strong and was totally giddy about my race.

Clare and Jenelle also had great races, and we sat around in the sunshine on a beautiful California day eating tamales, drinking Corona, cheering folks across the line, and feeling satisfied. One of the things I really noticed about hanging out at the finish was that this race has such a strong ultrarunning community feel to it. It’s not just that I knew a lot of people there, but also that everyone there seemed to know each other. It makes it such a supportive environment, and just a fun place to be.

It was more than just the competition that was top notch at Sonoma. Everything from the course to the aid stations to the post-race food was excellent. (Plus, there were those mysteriously age-correlated bib numbers. Very curious.) It makes sense, since Tropical John has a slew of experienced ultra veterans working hard to make it all happen. I had fairly high expectations for this race, and I have to say they were all exceeded. Thanks so much for all your work, you guys!

I also owe a huge thanks to Keira, who planted the goal that kept me going for those last 20 miles, (You’re a rock star, Keira!) and to the men who ran with me the 3 miles from the last creek. It’s amazing how you can run all day long, and then so much can happen in just 30 minutes.

I can see why this one is becoming a destination race. (And I didn't even do any wine tasting!) Lake Sonoma 50 is a keeper. 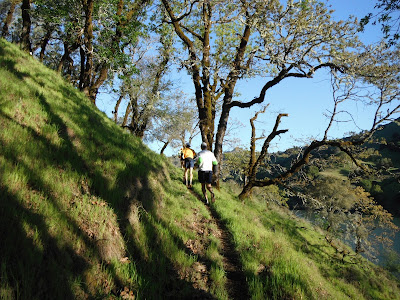