Tapering at the Donner Lake Triathlon 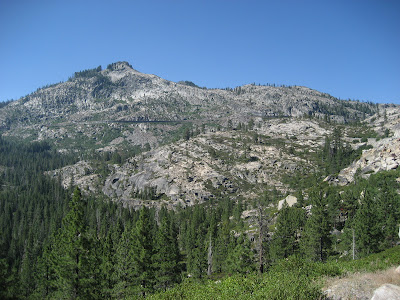 Ahhh…extreme tapering, what a great life! After a few days in the 90’s in Seattle (who knew it got that hot up there??) taking some days off last week was not too hard. I spent 10 hours in the car on Saturday driving down from Portland in order to get to the race expo for the Donner Lake Triathlon. They charge an extra $20 or something to pick your packet up on race day, so I needed to get there by 6:00 in order to avoid that issue. I arrived at Donner Lake with my right leg suffering severe driving cramps despite my generous use of the cruise control. Not exactly a great pre-race plan to spend 10 hours driving, but oh well.

I got my stuff, and started feeling nervous noticing how ripped all these other people were who were checking in. Triathletes are fit! I was more than intimidated. I then proceeded to worsen the situation by going down to the beach to check out the swim course. Oh my God! The far buoy that we would swim around was so far out into the lake I could barely see it. I wanted to cry. What was I thinking signing up for this thing and putting in no training on the swim and only two days on the bike? (Does two days even count as training??)

At home that night I seriously considered whether I should be doing this with TRT less than a week away. I was torn be the two questions: “Am I stupid if I do this?” and “Am I a total wimp if I decide to bail out before the start?” I did not sleep well.

In the morning I arrived at the west end of Donner Lake to the usual pre-race excitement and was glad I was there. I knew the swim would just be survival, and the most important part was to stay relaxed. I found being at the start with my gear to get ready and things to do allowed me to relax and not worry so much. Triathlons are so gear intensive; pretty different from running. I got all of my stuff ready at the transition area, got a short warm-up and stretch in, and put on my wetsuit.

There were two triathlons going on: a sprint distance and the international distance. All the sprinters had started by the time I got to the starting area, and the announcer was busy sending the men off in age group waves five minutes apart. I did some last minute stretching while “Footloose” blasted the crowed in an attempt to generate energy. Why is it always “hits of the 80’s” that race directors choose for their pre-race music?

My wave (women 34 and under) started at 7:50 and there were two more waves after me. I started easy, as was the plan, but quickly felt my heart rate climb. The thing I hate about swimming is that you can’t just breathe whenever you want to. Soon enough I began to flail and switched to the backstroke. I love the backstroke! You can breathe as much as you want to! Well, except for the occasional wave washing over your face causing you to gasp and sputter.

As I approached the farthest buoy I was flailing a little more, and a safety kayaker offered to let me rest on his boat. (This is actually totally legal.) Did I really look that bad?? I declined, knowing that I just needed to keep making forward progress. The swim was sort of a square, so the first turn at the far buoy was still only about 1/3 of the way to the swim finish. I got caught and passed by people in both of the waves that started behind me, and after a lot more backstroke, finally found myself on the beach. Hallelujah! The relief was overwhelming!

My swim finish was about what I had expected. I was pretty much last in my wave, but I had expected to take 40-45 minutes and I finished in about 36 minutes. I was pretty happy with that, and extremely happy to be done! Getting on the bike was truly the best feeling in the world.

The bike course immediately starts climbing for 3 ½ miles up to Donner Summit. It’s a tough climb, but living here, I have done it enough times that it doesn’t intimidate me. I had my new road bike that Andrew got me for my birthday, and I have to say, it kicks ass! The only other triathlon I have done is the sprint version of this same race, and I have always been the goofball riding up the hill on a mountain bike. I love my new bike! I was also pleased to see that there were still a lot of athletes around me, so at least I wasn’t last in the whole race. I spent most of the hill powering past other cyclists.

I also found that my new bike turned me into a better downhill biker. I have always been a decent hill climber, but a total chicken on the downhills. This bike fits me so well and gives me so much confidence, that I did my best downhill riding ever. On the other side of Donner Summit I found myself in my very highest gear spinning like mad to get more speed on the downhill. Obviously it wasn’t a very steep downhill, but still, I was having a blast! I realized then that, being a runner, triathlons are great fun because each stage actually gets easier as you progress to disciplines for which you are more suited. I was later to revise this theory during the first mile of the run. Ugh! The descent down old 40

The final descent down old hwy 40 to the transition area was probably my shining moment of the day. This is not only a steep downhill, but contains a series of hairpin turns that make it a tricky descent. I am notoriously slow on this hill and ride my brakes a lot. On race day however, the road was blocked to traffic so I didn’t have to worry about cars. This also allowed me to swing out and take the best line around the corners. I had a blast! I started down with one woman who I kept in my sights the whole way, and I actually passed someone. This is unheard of for me. Apparently Andrew was cheering somewhere near the bottom of the hill, but I didn’t see him because I was so focused on avoiding any bumps or potholes while the ground sped by me at the speed of light. Unfortunately, he didn’t see me either, so no pictures from this event! I told him he didn’t recognize me because I was going so fast, he was looking for someone much slower on the bike. I think this is actually the truth!

I stumbled through the transition area and set out on the long 10K (6.5 miles) around the lake. Contrary to my expectations, I did not feel great on the run. I managed to catch a few splits and think I was doing about nine minute pace on the flats. It felt pathetically slow, but somehow I was still passing people. Even though I was feeling like crap, I thought, “If I feel this good in the last 6 miles of TRT I will be stoked.” I clearly will feel much worse during the last 6 miles of TRT because I will have just run 44 miles, but it helped to put things into perspective.

As I finally approached the finish line I experienced a frightening sense of deja-vu when I heard the familiar sounds of “Footloose” pumping through the speakers. Apparently their selection of “get pumped up songs” wasn’t very long. This finish had probably the best feature of any finish I have ever seen: It was located about 10 feet from the edge of the lake. Within 30 seconds of finishing I was stripped down to my swimsuit and floating in the soothing coolness of Donner Lake. Blissfully enjoying the feeling of being done, I relaxed in the water for a few minutes and went to find Andrew.

Although I am definitely sore from the triathlon, I am glad I did it. It was a beautiful day and I had such a great time. It was one of those days where I really appreciated living up here in this beautiful mountain town. I finished somewhere in the middle of the pack overall, and more towards the top half for women. I feel pretty good about this. I think it shows my overall level of fitness to do that well even though my training wasn’t really geared for the event. The soreness is mostly just in my shoulders, so hopefully this didn’t take too much out of me for the upcoming 50 miler. It was definitely a good distraction, and maybe that was the whole point.