The Burton Creek Trail Marathon, and Other (more interesting) Topics 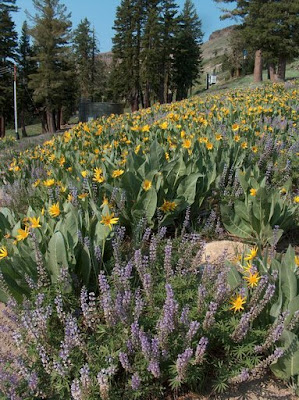 Stashed in amongst a myriad of activities, including a week in Yosemite, a handful of concerts, three wedding receptions, a sprained ankle, a 2-week illness and volunteering at Western States, I found time Sunday for the second annual Burton Creek Trail Run. Of the aforementioned activities, this race was probably the least interesting.

After spending Friday and Saturday saturating myself in the excitement and drama of Western States, I was mentally ready for a race of my own. Unfortunately, I was not physically ready. The previous week, I’d sprained my ankle and as a result, hadn’t run for seven days. I’d also been fighting an illness that would repeatedly seem on the verge of departure, only to come storming back after a hard workout, or a night short on sleep. It’s tough to shake an illness when you keep going 100% every day, but there was just too much going on to stop and rest.

I waited until race day to register because I was totally uncommitted to running this race. On the one hand, I’d been sick, and my ankle, although better, was still questionable. On the other hand, all the time off from running was poor timing for my training for TRT50M, and I was desperate to make up some mileage. I wasn’t super excited about it, but I decided that I just needed to get it done.

Saturday night I did not sleep well. I think I was still amped up from watching the race, plus, I’d been sucking down diet soda at Michigan Bluff all day to fight the heat and I’m not really used to that much caffeine. Every time I woke up, one thought popped into my head: “Oh God, those runners are still out there!” I knew they were suffering, and I felt for them.

I finally rolled out of bed at 7:00 am, and knew immediately that the sleep deprivation had not been good for my lingering illness. My throat and head both hurt, and I was tired. With a 9:00 am start, things were already heating up by the time I got to the starting line.

This year’s edition of the Burton Creek Run, put on by Big Blue Adventures, featured more distance options than last year’s 10 and 20 mile races. The event offered a 5K, 10K, half-marathon and full marathon. There were about double the number of runners this year, totaling perhaps a hundred.

I knew it wasn’t likely that the marathon field would be very big. (Last year there had been only 16 runners in the 20 mile race.) Under normal circumstances, a race this small is the kind I could potentially win, depending upon who showed up. Given the way I felt, however, I just wanted to take it as a training run. I figured it would be challenging to let go of the competitive feelings.

The venue for this race is the . With its forested single-track packed with wildflowers of all kinds, it is beautiful this time of year. Unlike most trails in Tahoe, it also has very little in the way of climbing or descending. This was perfect for my battered-feeling body. 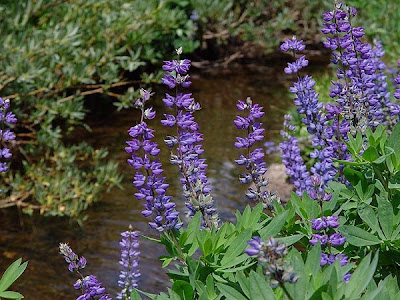 In the first couple of miles, we ran across a small lake via an old stone dam. I didn’t recall this stretch from last year, and I was struck by the stark beauty of the still water reflecting the surrounding forest. It was a nice way to start the run.

For the full marathon, we ran the loop-course of the half-marathon twice. During the first loop, there were plenty of other runners around, although I never really ran with anyone else. I knew I wouldn’t be able to match the 9:00 minute pace I’d held at last years race, so I had an estimated goal of 10:00 minute miles. I was just a bit faster than this on the first lap, running 2:04 for the 13 miles.

Heading out for the second half, I could tell I would be slowing down. I felt like crap, and the trail now seemed deserted.

I also noted that it was just after 11:00 am. This meant one thing to me: All the official finishers of Western States had now crossed the finish line. With little around me for distraction from my slackening pace, my thoughts returned to the runners of that race.

Spending the day at Michigan Bluff, I had been inspired by the tenacity of so many people. Suffering seemed to be the theme of the day. But my thoughts also kept returning to someone who hadn’t appeared to be suffering at all. When most runners were dragging themselves into the aid station at mile 55.7, she was all smiles, looking like she was having the time of her life. This runner was Folsom’s Jamie Frink.

I have seen Jamie at a few races, and have sort of considered her one of my peers in running. By this I mean that our finishes are not too far apart. This was a rather unscientific conclusion I drew after only one or two races, but nonetheless, it encompassed my perspective.

I noticed she ran a very impressive 8:16 at AR50 this year, and I knew she must be training hard for Western States. Seeing her on race day, it was very clear that she had. Not only did she run sub-24, but she also finished an impressive 8th woman in a very competitive field. I was totally blown away by her performance!

Looking at her stats, I could see that she ran a very smart race. She was in 177th place at Red Star, and spent the entire day steadily passing other runners. By the time she reached the finish line in , she was in 65th overall.

I don’t know how Jamie managed to look so good and run so fast on a day when so many others struggled. I do know that I am inspired, I’m not really thinking of her as a peer anymore, and that Jamie Frink is one fast woman!

Back in my own race drudgery at Burton Creek, I was just coming through the second aid station on the second loop. Since I hadn’t seen any other runners, I asked the guy at the aid station how many other women had com through. When he told me, “none” I wasn’t sure if I was excited or depressed. I just didn’t feel like racing.

I tried to pick up my pace a little to avoid getting passed, but my heart just wasn’t in it. At the next aid station I was told that there were two women ahead of me, and I was relieved. It was getting hot, and I just wanted to drag myself in. My attitude was flagging, and I still hadn’t seen another runner. I thought maybe the field was so small that I was the last one out there. Somehow I mentally went from first to DFL in about 20 minutes. 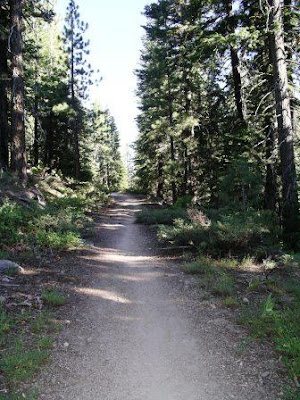 As the heat grew, I felt more and more pathetic. I figured that the Western States runners had endured temperatures 15-20 degrees hotter than this the day before. (Actually, it was probably worse.) I knew I could never have survived it. I started walking even the slightest hills.

As my mind continued to search for another topic on which to dwell besides my current state, I recalled something else from the weekend. On Friday at , I had learned of the death of Dan Moores. He had lost his battle with leukemia. I was shocked, because the last I had heard he was doing much better. I, along with many others I’m sure, shed a few tears for Dan on the grass at Squaw that day.

Dan was an runner, and owner of the Auburn Running Company. He used to lead group training runs every Saturday in , and that’s how I first came to meet him. It was through these Saturday excursions that I learned the trails of , and met other local runners. Dan was always there to lead the run, and made sure no one got lost along the way. I always appreciated that, since I never knew where I was going when I first joined the group. I definitely feel that I owe a bit of my ultrarunning successes to him, and I know many others feel the same. It’s just hard to believe that someone I knew as so strong is now gone. The community is grieving this loss. I sent out a little thanks to him and a little prayer for his wife as I shuffled down the trail.

I was finally nearing the finish at Burton Creek, and thankful that the last half mile was downhill. I crossed the line in 4:34, which would have been disappointing if it wasn’t completely expected. Two men, who had finished the marathon themselves, cheered loudly for me which was nice. Aside from them, and the Salomon rep packing up his booth, the finish area was deserted. All the 5K, 10K and half runners were long gone.

After sucking down some liquids and laying in the shade for a while, I talked to the other runners long enough to figure out that I was actually the first woman. Once everyone had finished, I learned something almost funnier—there were only two women in the entire marathon. This fact led to the following exchange:

Other woman runner: “What was it Ricky Bobby said?”

Me: (enthusiastically) “If you’re not first, you’re last!”

We had such a good laugh over the irony of a two-person race, that it actually lifted my spirits. I wish I could remember her name, but she and her husband were training for their first 50 at Firetrails this year. How exciting! Sitting around and chatting with the five or six other runners almost made me forget how crummy I felt. I love runners!

And that sentiment seems like a good place to leave this race report.

The triumphs, setbacks, support, friendship, heartbreaks, love, tenacity, and spirit that were all over the Western States course this weekend left me feeling enriched, inspired and reminded of how much I love this running community. Even the brief camaraderie at the end of my own race was enough to remind me of the good parts of the day. Can I say it again? I love runners!

Thanks to Big Blue for putting on this beautiful race, and thanks to all the runners out there with whom I’ve had the privilege to share the trails, as well as those I’ve yet to meet.