The Hungover Mile (and other weekend adventures) Fourth of July weekend in small-town . Ahhh, nothing says freedom like closing down the streets for parades of fire engines; lighting the night sky with overpriced, gaudy fire-hazards that frighten neighborhood dogs; firing up the grill; shucking corn; making ice cream and, oh yes, running a mile.

Every town, it seems, sponsors a “Firecracker Mile” to celebrate the Fourth. It’s a fundraiser for the local cross country team, or, if you happen to live in a ski town, for the local Nordic ski team. It has a late start time, and people run with dogs and strollers. Kids from the local high school generally post the fastest times, while the pre-K set brings up the rear. Sounds like fun, right? has just such an event, and until this year, I had never participated.

The weekend began Friday evening when our friends, Brooks and Alexis, came up from San Francisco (along with about half of the Bay Area, I think) to visit. We dragged them to a neighborhood party, and during the course of the evening, I mentioned this one-mile fun run the next day. Alexis was excited about it and thought we should all do it. Heck, even non-runners can make it one mile, right? Brooks and Andrew were less enthusiastic. Several bottles of wine and some tequila later, and even Alexis was having her doubts. By the time the next morning rolled around, so was I. 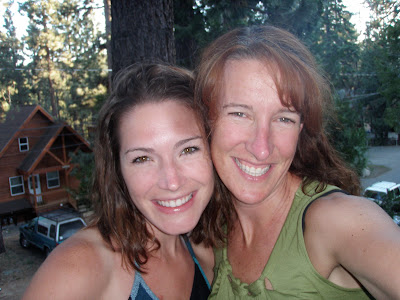 Before: the intrepid runners party-it-up on Friday night.

We rallied ourselves with coffee and Advil for the 9:45 am start. During this holiday weekend, rumor has it that the town of triples in population. I have no problem believing this, and as such, it is imperative not to drive a car the entire weekend. Alexis wasn’t excited when I pulled the bikes out of the basement, but she was a trooper. She jumped on and followed me down the hill at 9:30 for the ten minute ride. If you’re keeping track, this gave us approximately 5 minutes to lock up the bikes, sign-up, and get to the start. But hey, it was only a mile, right? No need to stress.

There are several brilliant things about this race. First and foremost, the entire course is closed to traffic, and the sidewalks are packed with spectators. Excited fans

sit in chairs, with coolers packed with sodas and snacks, enjoying the festivities. Of course, they’re actually there for the parade that starts at 10:00, but whatever.

The second shining aspect of the race is that the course is straight, and slightly downhill. I figured that even hungover, a course like this might deliver a 6-minute mile for me.

So how much can I really describe about a race that only lasts one mile? Alexis and I squeezed onto the line with 250 other starters, and we were off. 5 minutes and 35 seconds later, it was over. 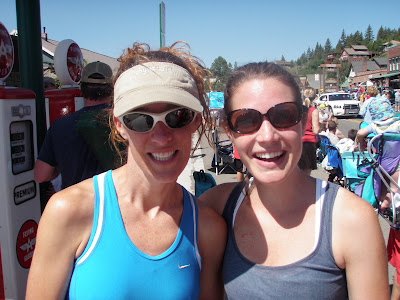 After: Alexis and I celebrate our success!

The roaring crowds were pretty fun, especially since many voices were those of my friends and neighbors cheering me by name. But my God, one mile hurts! It’s a distance with which I was obsessed for nearly eight years of my life, and one I haven’t run in the 14 years since. Still, I was pleasantly surprised with my time, and even more pleased that it was over so quickly.

Alexis finished in 7 minutes—an impressive time, especially for someone who doesn’t consider herself a runner. (Complete results here.) We jogged back to retrieve our bikes, then returned to the finish line area to join a group of other friends who’d saved us prime parade-watching spots.

Eventually Andrew and Brooks showed up on their bikes, and soon we were all enjoying the antics of the parade, alternately cheering and heckling its participants. The parade always starts with the local fire stations bringing out their old trucks. I don't know where they keep these things the rest of the year, but I swear we have more modern fire engines than this in Truckee! This fire truck is doing a fine job of encouraging the favorite pastime of the Truckee Fourth of July Parade: namely that the parade participants and spectators are constantly engaged in water wars. It's generally a fight over who has the biggest squirt guns. I think these guys win. This is our local drill team. We like to call them "the old guys with skis," although I'm sure they have some sort of official name. They actually do little tricks with their skis, and it's so much fun to laugh and cheer them on. Everyone enjoys the parade! This air-band, sponsored by Truckee Travel, was rocking under a cardboard replica of Rainbow Bridge. This is one of our most obvious, and depicted, man-made landmarks. What I like about this version though, is their added element of humor. If you look just at the top of the arch, you'll see a little blue net. Inside that net was a stuffed bear, referencing what had to be one of the weirdest bear rescues from a couple years back. 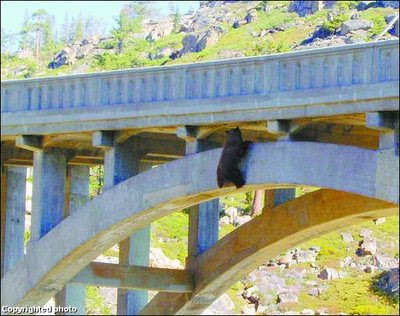 The real bear that climbed under the bridge after it got scared off by an approaching car. 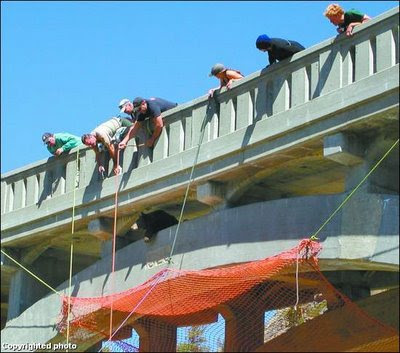 (Don't worry, the bear was safely rescued, and made it back into the wild.)

After the parade, we spent the rest of the day in what has become our traditional Fourth of July fashion. We got sandwiches, rode our bikes to for a swim, then home for a barbecue with neighborhood friends.

I served my famous blackberry-pineapple mojitos to anyone who stopped by. (So, you know, if your in town on the Fourth next year, stop by!) The blackberry-pineapple mojito. We planned a group outing on the Hole in the Ground trail for the following day, so I miraculously managed to limit myself to just one of these fabulous concoctions.

Sunday, the four of us drove up to Donner Summit, where Brooks, Alexis and Andrew rode mountain bikes on the Hole in the Ground trail, and I ran. The technical aspects of this trail meant that it was great training for the TRT, and that I was well-matched with the mountain bikers.

I also ran into my friend Sarah who was running the trail. You may remember Sarah as my race-saving pacer from last year’s TRT 100. This year, she was training for the TRT 50K. I had a great time running the second half of the day with her. The 16 miles felt shockingly easy. Hopefully this means good things for my upcoming race.