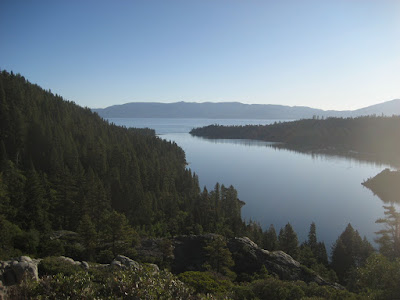 It's an exciting feeling, that first discovery of something amazing in your own backyard. You realize you've had something incredible at your disposal all along and never knew it--like heading out for the first ski day of the year and finding that twenty dollar bill that's been hiding in the pocket of your jacket all summer, only much, much better. I get so caught up in the beauty of the trails that are a mere 10-30 minute drive away, that it tends to limit my sphere of standard trail runs. It's easy to do, with trails like the PCT and the TRT responsible for most of my weekend mileage. So the fact that I had never set foot on the Rubicon Trail was my primary motivation for driving down the West Shore for the Emerald Bay Trail Run.

The course skirted the edge of Emerald Bay, following the shore of Lake Tahoe to finish at Lester Beach in D.L. Bliss State Park.

This is quite possibly my new favorite trail in Tahoe, (and that's saying something!)

I had run a hard twenty miler the day before, and was surprised to realize on Sunday morning that I was sore. I wasn't too concerned since the 7.5 miler was merely to be short, fun training. I planned to run the point-to-point course decently hard, then skip the shuttle ride and run the trail in reverse back to my car. It worked out to be a perfect plan and a beautiful day. 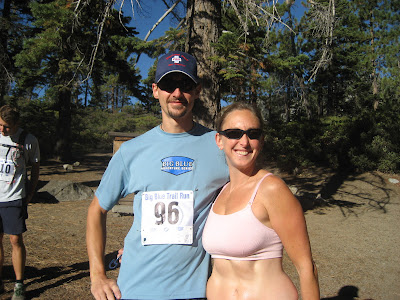 Jason Payette and Lara Pearson get ready to start.

I arrived at the start at Eagle Point Campground on Emerald Bay to be greeted by friends Paul, Betsy, Zach, Lara and Jason. With a 9:00 am start, it was a bit of a lazy morning, and I was grateful. We sipped coffee, pinned on bib numbers and lined up at the bottom of a paved hill.

After about a half mile of pavement, we hit the downhill and the singletrack. It was clear almost immediately that I should have run a little faster on the uphill, because I was ready to fly and was feeling a little frustrated that the runners ahead of me weren't moving faster. This is probably the first time this has ever happened to me on a downhill. I ran at what felt like top speed, dangerously tailgating the runner ahead, eyes keen for any opportunity to pass. Here and there the trail widened a bit, and I sprinted past the throngs whenever the moment allowed. 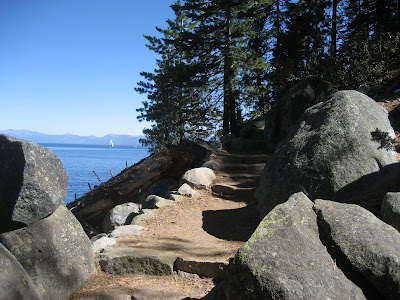 Soon I was in a comfortable place, running fast and breathing hard. The trail was unbelievably beautiful, but all of my focus was on my feet. The technical aspects were challenging at times, and I was loving every minute of it. 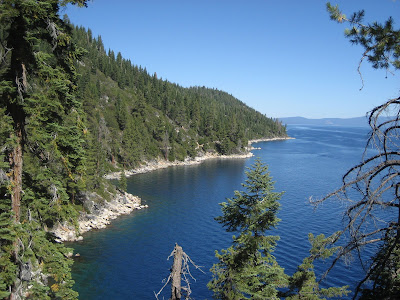 After passing a few more women, I knew I was running in second. Focusing on moving fast and staying upright, I cruised along and soon spotted the first place woman ahead. She was tall and thin with the stride of a gazelle, and I knew I would never catch her. But shortly, while I wasn't even thinking about it, she appeared right in front of me.

I much prefer the more relaxing position of running in second than first, but truthfully, to avoid passing her I would have had to slow down. I just didn't feel like slowing down. 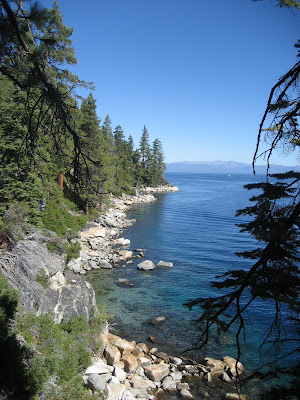 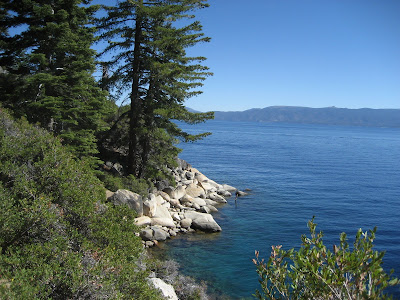 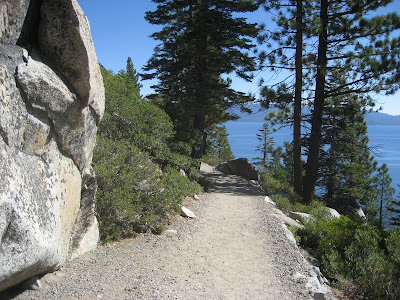 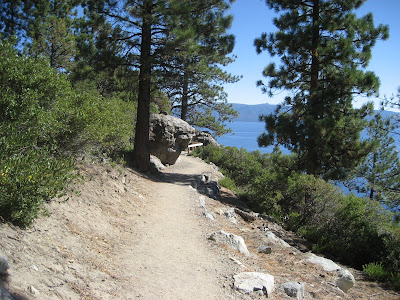 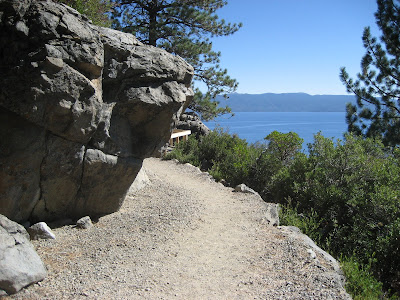 The trail reminded me quite a bit of the Flume Trail, but closer to the water and with a less-precipitous drop-off. 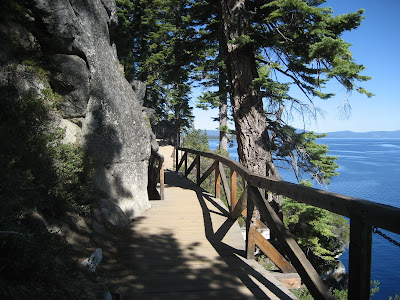 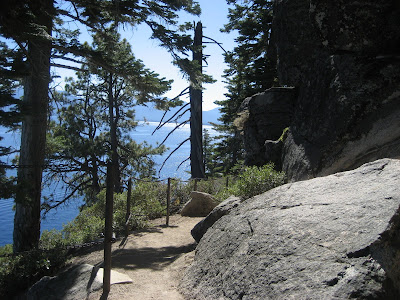 There were a number of fun, technical challenges. We had to squeeze our way between some large granite slabs... 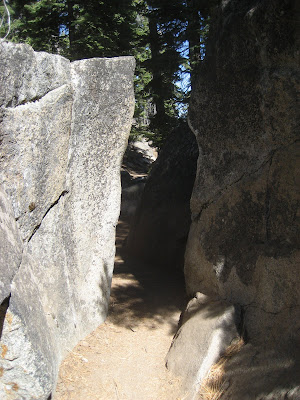 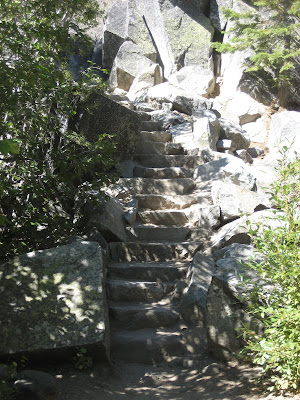 ...hug tightly to more granite to avoid the cliff edge... 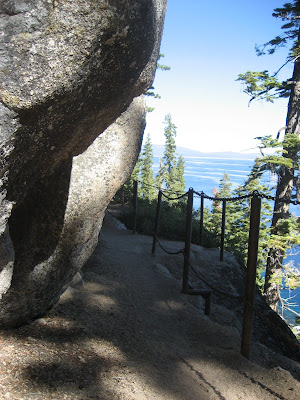 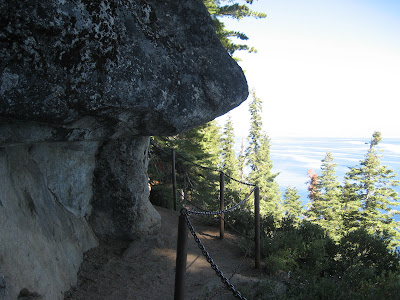 This was the sight welcoming runners as we crossed the finish line... 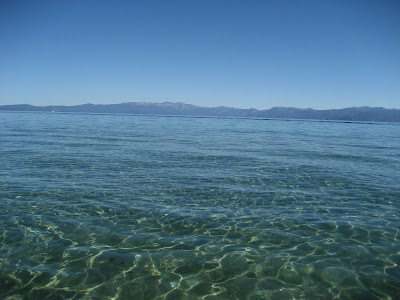 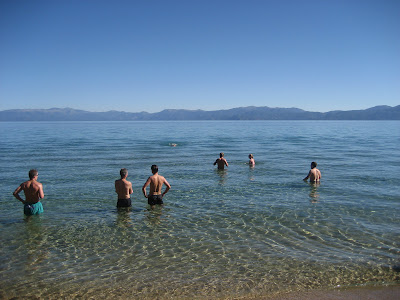 I crossed the line in 56:44, good enough for first woman and 9th overall out of 79. (Complete Results) I immediately pulled off my shoes and headed in to the lake for a soak. The water was just cool enough to allow me to call it an ice-down, but the warm air and sunny skies made it a truly blissful experience. 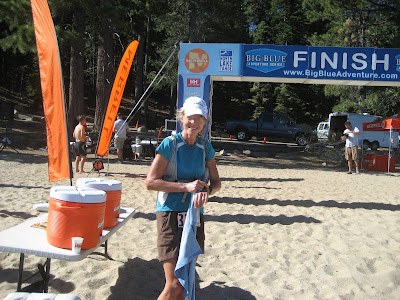 Betsy Nye is all smiles, still aglow just a week after another amazing win at Wasatch.
I sat on the beach for a while and cheered for my friends and fellow runners. When the beer came out, I knew it was time to get back on the trail. Nothing has the power to steal the second half of a training day like cold beer and good company on a sandy beach at Tahoe.


The run back was the yin to my race's yang. It was slow and peaceful, allowing for plenty of time to soak up the scenery and take pictures. 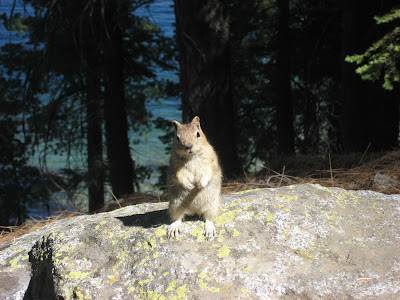 This little chipmunk was hoping I might feed him, but he was out of luck since I was experiencing a major sugar crash of my own with nothing to satiate myself. 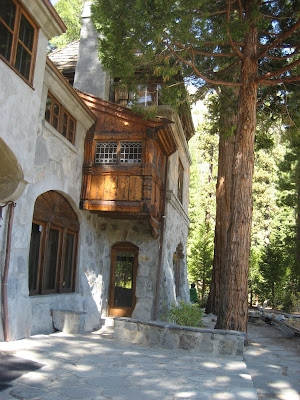 I paused to play tourist briefly at Vikingsholm, which I'd never seen before. 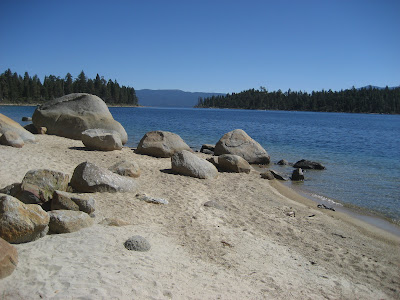 Running along Emerald Bay I found this small, beautiful, secluded beach. I couldn't believe I had it all to myself. I wanted nothing more than to strip off all my clothes and swim through the crystal blue water, then lay around all afternoon soaking up the last rays of summer and pretend like it was the beginning rather than the end. 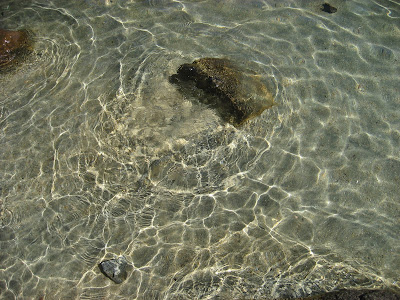 Is it any wonder that Trail runner Magazine just included Truckee in its list of top 7 towns for trail running?

"...there's so much beauty in the world. Sometimes I feel like I'm seeing it all at once, and it's too much. My heart fills up like a balloon that's about to burst. And then I remember to relax, and stop trying to hold on to it. And then it flows through me like rain. And I can't feel anything but gratitude for every single moment of my stupid little life." 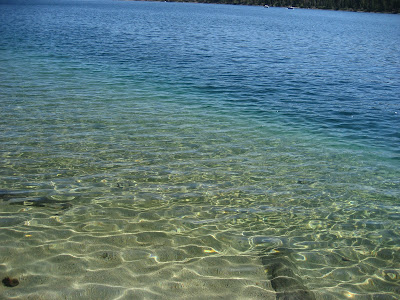