Good morning, everyone. Please take out your portfolios to review for a mid-term reflection and self-assessment.

To begin, I’ll revisit this past weekend. Then we’ll take a quick peek at past races this season, those yet to be run, and goals. (Raise your hand if you think this will be another ridiculously long post.)

Last weekend I ran in the first annual Frog Creek Trail Run here in Truckee. It took place on a beautiful and challenging course on Donner Summit. I had the pleasure of running most of the 10 miles with Turi, who came up from Reno for the race. You should definitely check out his race report, which includes some great pictures!

I was happy to see many familiar faces from my neighborhood--many folks who don’t typically log numerous miles running, but were there to support the cause. After the race, we all sat around in big adirondack chairs on the forested grounds of the lodge eating fresh grilled burgers, sipping local brews and listening to some live, acoustic music. Hey, I think I just described my perfect day!

View of Lake Angela on the Frog Creek course. Photo courtesy of Turi

Sunday I had a planned “the epic link-up” for my official last day of summer vacation. I would run out my front door, through the woods to the Tahoe Donner Trail system, follow the Donner Lake Rim Trail, connect to the PCT over Donner Summit, then turn off at Tinker’s Knob to run through Coldstream Canyon, and follow that home. I figured it would be about 30 miles. Phenomenal trail running, no driving required. 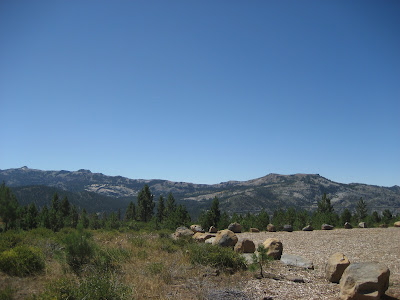 Anderson Ridge (on the PCT) viewed from Tahoe Donner 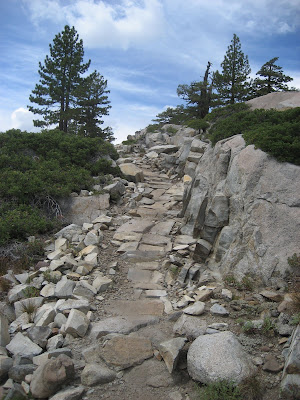 Unfortunately, Cap was having an off day. It was clear in the first 3 miles of the run that it wasn’t going to be a good day for him to go 30. I spent most of the run worried about him, and allowing my brain to spin over all the zillion things I had to do for school and should have been doing instead of running. I called Andrew to come rescue Cap when we reached Donner Summit. We had already run 18 miles, and I knew we had at least 15 to go, maybe more.

My spirits were low, and the prospect of a 33-35 mile day felt burdensome. That wasn’t how I wanted to feel about this run, which I’d been so excited about planning. When Andrew showed up, I joined Cap in the car and headed home. I felt disappointed, but I knew it would happen another day.

My Season so Far

My year started out with a beautiful race on the coast, the Surf City Marathon. I’d chosen to switch things up a bit this year by running a road race, and I think it was a good call. I needed to get a little speed back in my life. I am definitely a trail runner, but I had a blast at Surf City!

All of my spring races were training runs, and it was great to get in all that social running time without feeling too competitive. All the racing helped keep things fun and interesting. By summer, everything was geared toward TRT 50, and I felt stoked about my race there.

In stark contrast to how I felt after last year’s 100, I felt inspired after TRT this year. My training in August somehow fell into place without even having a training plan. Mileage was good, quality was excellent, and it seemed that every weekend I ran a new trail in another beautiful location. 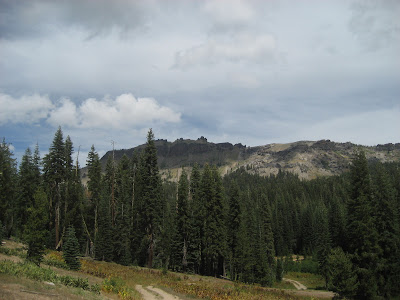 Castle Peak, viewed from Andesite Peak during a run on the DLRT and Hole in the Ground Trail

On the numbers, I finished in the top 5 women in seven races. I feel pretty good about that, even though I am well aware that a number of those races were quite small.

Where I go From Here

My final race of the year, the Helen Klein 50 Mile, is my main focus. At the moment, I feel totally ready to tackle my goal of running sub-8 for the distance. Unfortunately, the race isn’t until October 31st. With school starting, and my schedule looking extremely tight, I’m primarily worried about losing fitness between now and then.

I’ve tried to plan some races in September with the hopes of using them to stay in shape. Plans are still a bit up in the air right now, however. I’d love to do the Lake of the Sky/Tioga Road double, but I just can’t imagine driving all the way to Lee Vining, running a road right up to the entrance of Yosemite, and not having time (or energy!) to go into the park and run trails. I’ve been considering skipping Lake of the Sky for some additional running on Tuolumne trails, but I’m also starting to question the wisdom of leaving town at all on the first weekend after the start of school. I’m torn.

I’m excited about running the Lake Tahoe Marathon for the first time in many years. I used to love this race, until I swore off road races. (These promises never last, do they?) I’ve never been in shape for this race, except when I ran it as part of the Tahoe Triple, and even though it will just be a training run, I’m hoping for a course PR. I think my best time is around 4:07, and that did come on day three of the Triple. It’s not a fast course, but I should definitely be able to break that time.

So, with that, I’m keeping my fingers crossed that I don’t go from feeling like a bad-ass to feeling like a lard-ass in the next two months before Helen Klein. Then it will be time for a nice long nap.

Thank you for indulging me in this all-things-Gretchen post! (It wasn’t too long, right?)