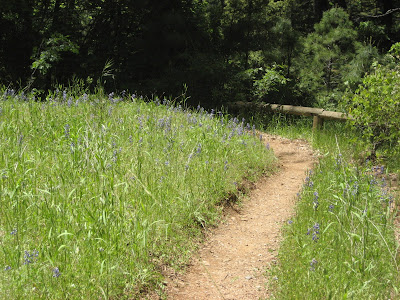 "I think I'm really feeling six weekends in the canyons," Jamie huffed, about halfway up from the swinging bridge.
"Well thank God!" I managed as I climbed steadily behind her. I was beginning to wonder if this woman ever got tired.
Jamie's affinity for the canyons had landed me here nearly half a dozen times this spring, and truthfully it was awesome running. Steep ups, steep downs, quiet trails, good company, and damn good training. Does it get much better?
The previous Sunday we'd run from Michigan Bluff to Dusty and back. As usual, it had been a wonderful day, but nonetheless at the end of the day I could only think that I was ready for a new trail. I've already shared how the fatigue has crept into my daily routine, and frankly it was a relief to hear that Jamie was feeling it, too.
I'd signed up for Saturday and Sunday of the Western States Training Camp - a Memorial Day tradition for ultrarunners. I wasn't surprised to learn that there was too much snow at Robinson Flat to begin Saturday's run there as planned. Runners would head out Mosquito Ridge Road for a few miles of snow running and pick up the trail at Dusty Corners, for 28 miles instead of 32.
I'll be honest, after spending most of the spring running these trails out-and-back for 30-40 miles, 28 miles one-way didn't sound like much of a workout, in spite of our current state of fatigue. As Jamie says, that's the point of running double canyons - it makes the one-way trip seem easy. So when she suggested that we combine Saturday and Sunday's runs together and go 46 miles on Saturday, I was all for it. 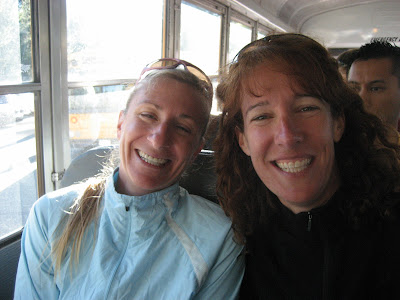 Heading out on the bus. 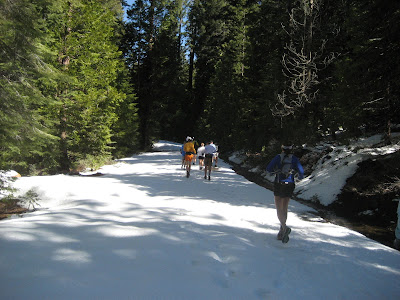 A few snowy miles on Mosquito Ridge Rd.
The weather turned out to be perfect. With such a cold, wet spring, we couldn't have asked for anything better than the sunny, mid-70's day.
It was a huge change running these trails with so many people around, but it was also fun to see so many friends and make new ones. 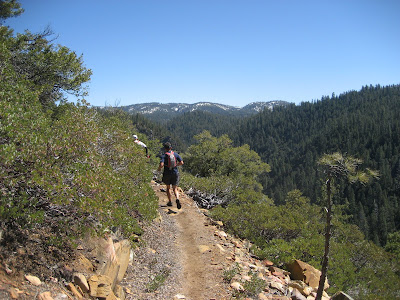 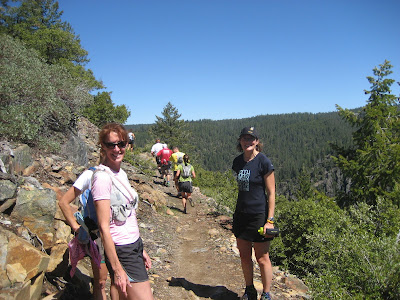 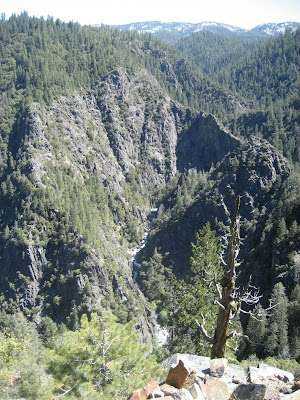 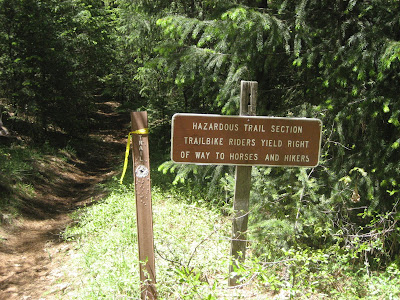 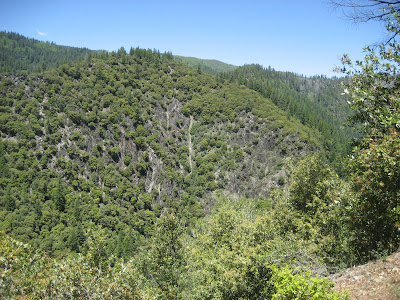 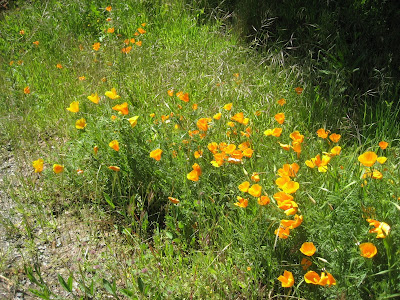 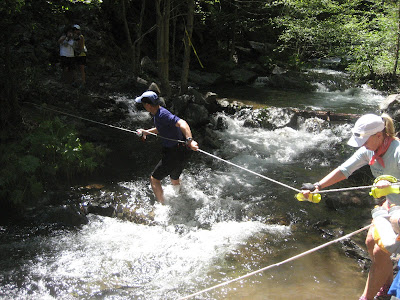 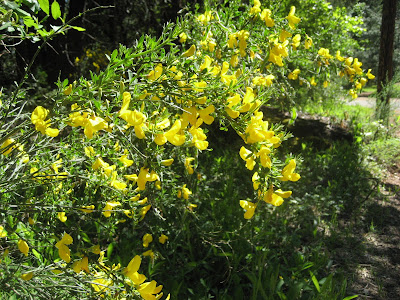 I thought passing through Foresthill would be tough because most other people were stopping here, while we still had 18 miles to go. Honestly though, it wasn't. We took care of business, said a few hellos, called the husbands to give updates, and we were out of there. 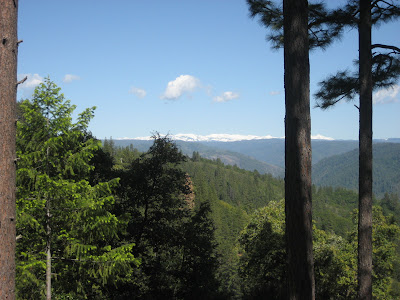 The trail now was quiet, and although I'd enjoyed the company, the peace was a nice change. The late afternoon stretched on into the evening, and the low light over the river was beautiful. I have to admit, I was feeling tired, my legs heavy. I felt soothed by the birdsong and the frogs and crickets chirping their melodies. I was grateful that this stretch of trail is mostly smooth, runnable downhill.
We were both struggling through a bit of a low spot when Jamie wondered aloud, "Who does this? I mean, really!"
I knew exactly what she meant. Still, my immediate response was matter-of-fact: "Um, 6 school busses full of people." Yes, there were a lot of us out here today.
"True. Although, most of them had the good sense to stop at Foresthill."
"Good point." I didn't have much of a comeback for this one. 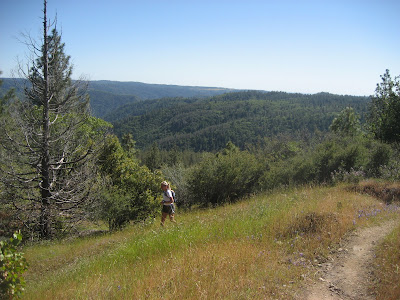 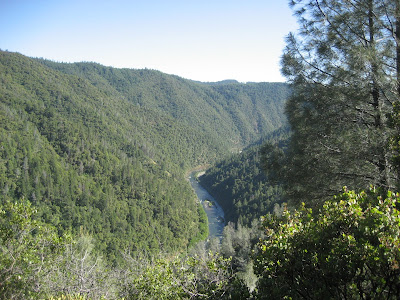 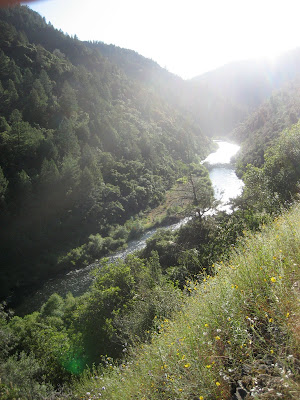 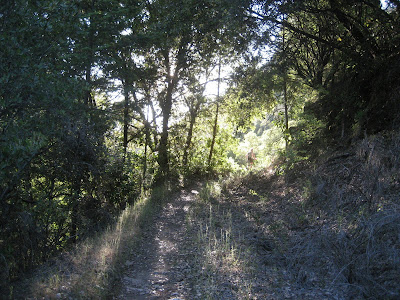 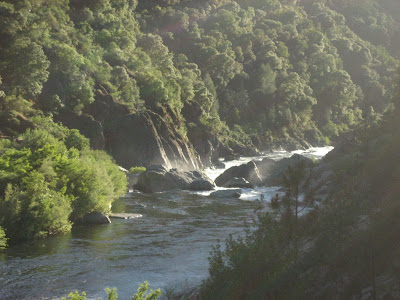 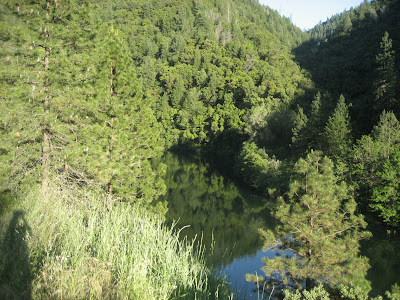 As we neared the river we could feel darkness approaching. It was an incredible time of day to be out on the trail.
The long climb up from the river to Driver's Flat didn't hurt nearly as bad as I had feared it would. Back at the car, friends greeted us with hugs and beer. What wonderful folks, these runners! 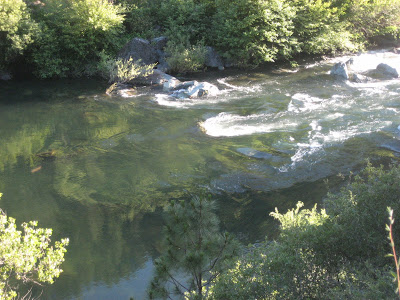 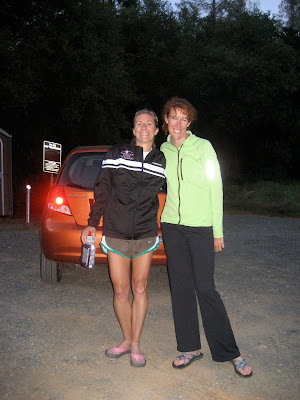