Year of the Dog Walk 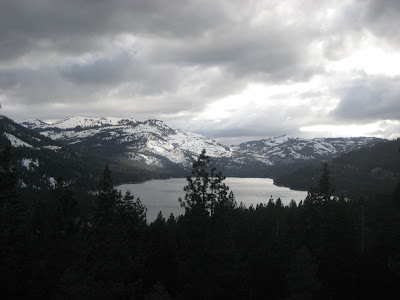 Mornings are dark in January, particularly at 5 AM. After the coffee is brewed, mukluks laced, warm hat, jacket and gloves donned, I am ready. I don’t need to call the dogs; they sprang from their beds at the first sound of my jacket zipping and are standing expectantly at the door, tails wagging.

We'll walk together, as we do each morning, unleashed, through the starlit, snowy streets of our small neighborhood. The houses slumber in darkness, greeted by the soft snuff-snuff of Gus’s nose hunting delightful doggie smells deep in the snow banks. My hands clasp the ceramic mug. Its penetrating warmth provides a much needed assist to my fleece gloves, while coffee tickles my nose with steam. It’s tranquility, stolen before the onslaught of each day.

My neighborhood is a dog-neighborhood. It’s also a kid-neighborhood, which pretty much goes hand-in-hand with a dog-neighborhood, as far as I can tell. Dogs and kids run loose, and we like it that way. We’re mostly full-time residents—no vacation homes—and we don’t have much in the way of fancy landscaping for any of them to trample. So, walking the dogs during daylight hours is frequently a social experience: throw a football with a kid; share a beer with a neighbor; help someone shovel the steps; divert your path to join someone else’s walk. And if there are no human friends out and about, you’re certain to be joined by at least a few doggie-friends who will gladly add their number to the roaming pack. 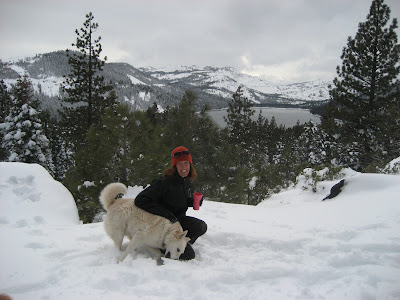 At the end of my street is a plowed road with no houses, leading up to a beautiful view of Donner Lake. It’s about a quarter mile one-way, and it’s the destination for most winter dog walks, when darkness and snow are prohibitive to longer hikes. It’s on this road where I have gotten to know my neighbors.

It was late in 2009 when I envisioned a photography experiment: Take a photo of that Donner Lake view every time I walked the dogs, developing a collection that would show the changing conditions of the seasons.

The Year of the Dog Walk was born. 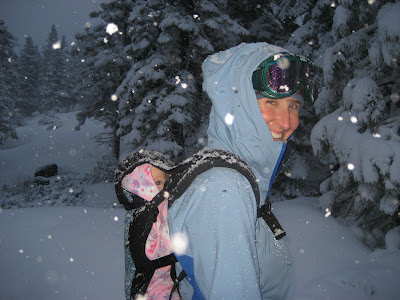 And, as often happens when I begin a new project, I began with enthusiasm. Most winter dog walks happen in darkness (before and after work), but I brought my camera along on every weekend walk. I greedily harvested pictures through January, February and March. I was especially interested in shots that showed weather, since I knew that summer’s arrival would bring with it an unchanging landscape of blue water, green trees and cloudless blue sky. I decided pictures of simply the view might not hold enough interest, so I tried to take pictures of friends and dogs encountered on walks, to give a sense not so much of the seasons and landscape, but of the joy of the dog walk itself. 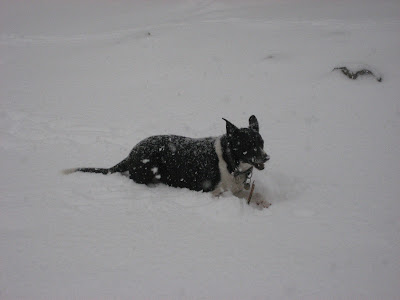 And, as often happens when I get to the middle of a project, I got bored and lazy. The month of May garnered me zero pictures. June: one, July: zero, August: zero, September: one. I didn’t get a single picture without snow on the mountains.

But, the saving grace of procrastinators is that we are deadline-driven. And, (as often happens when a deadline approaches) I snapped photos with a renewed vigor as the year neared its close. I even managed to gather most of them from the various folders on my husband’s and my computers and throw them together into a slideshow. 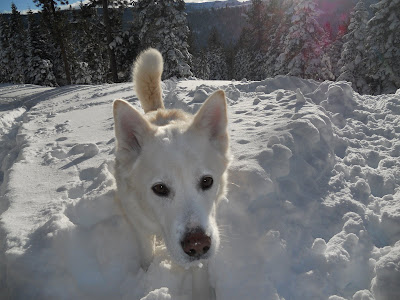 To be honest, I can’t say that it turned out as I had hoped, although it was a fun project. For me, it doesn’t do enough to capture the experience. I love the dog walk because it can connect me with those who share life in this beautiful setting. It can also provide a meditative renewal, a beautiful contrast to the challenges of life. Unlike running, where I’m keeping a close eye on the footing of the trail, walking allows the particular freedom to look around and appreciate the beauty of the mountains. The enthusiasm of the dogs is contagious as they romp and play in the snow, and every time I gaze out on that view, I smile and know just how lucky I am. 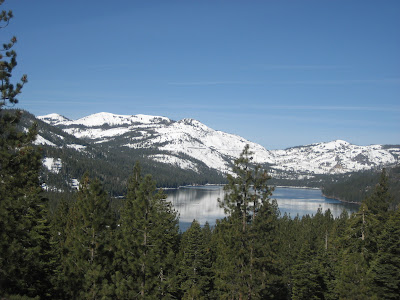 The photos I've already included give a pretty good feel for what you'll see in my project, but if you enjoy pictures of snowy landscapes, feel free to click "play" on the full slideshow below.