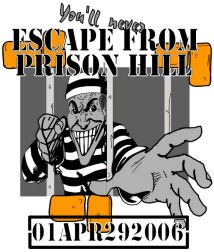 Escape From Prison Hill Half Marathon

On Saturday April, 29th I had the pleasure of joining about 130 other runners for the Escape from Prison Hill Half Marathon, in Carson City Nevada. The race had been suggested to me the week before by a local runner from Donner Summit, Jack Driver, who was racing almost every weekend in preparation for the Western States 100. A half-marathon of course, constituted an easy weekend for him.
I was trying to keep up my training after the AR50 and before the Bishop High Sierra 50K on May 20. I had definitely taken some recovery time after my first 50 miler, and had only managed one 20 mile run since the April 1st race. My training schedule called for 20-25 that Saturday, but I decided perhaps I would opt for quality over quantity. I entered the race that Wednesday.
At the 7:00 am start temperatures were about 50 F, with sunny skies. The race director promised rapidly increasing temps, and looking around at the runners gathering on the starting line I noticed that many were carrying water bottles. I had been indecisive about carrying my water bottle, but since this was a training run, and carrying water was part of training, I made a last minute run back to my car to get my bottle. Fortunately I had a rock star parking spot, so this only took about 30 seconds.
As the start countdown began, Jack and his friend Peter (also from Truckee) repositioned themselves at the front of the crowed. I preferred to start in the back, knowing that the crowed would keep me from starting too fast. (Something I have been known to do at times) The first mile was on a dirt road and was relatively flat. It gave us all a chance to get warmed up, and shake out into our natural pace and position before the single track sections.
The first big climb up Dead Truck Hill (I did actually see the dead truck!) was fairly gradual, and by keeping my pace quite mellow, I was able to run the entire way. As we came to the first aid station (around mile 3 I think) the views we would enjoy for much of the run began to materialize in front of us. We could see across the entire Carson Valley to the snow capped Sierra beyond. It was, both literally and figuratively, quite breathtaking.
After the initial climb began to let up, there were several miles of slightly rolling, but mostly flat trail. This was without a doubt the best section of the course, and an absolute joy to run! The footing was great, the trail firmly packed, and the views constant. I felt like I was flying down the trail, and truly enjoyed the speed of a shorter race. 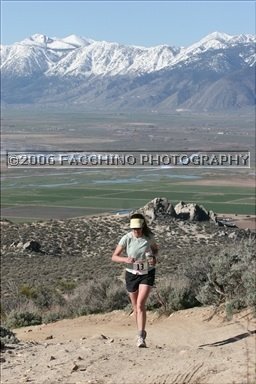 One of the Many Hills on the Course

After a fun descent, I reached the halfway point and began my least favorite section of the course. It was made up of some dirt roads and sandy washes that just felt like a slog. When the final (and STEEP!) hill began, it was almost a relief just to be done slogging through the sand and poor footing.
The website for the race states that this course is ”an excellent way for those wishing to experience the taste of ultra-marathoning without the added distance.” When I first read it, I thought that a rather strange description. After running it however, I think they had this hill, the namesake ‘Prison Hill,’ in mind. This hill is essentially a mandatory walk for about a mile. The key, as with many hills in ultras, is to keep a decent pace while walking. I had no problem keeping my heart rate high in spite of walking, and even managed to pass a few other “runners.”
After reaching the summit, another fun section of the course ensues. A series of very steep sandy down hills, punctuated with a few short steep up hills, carry you through the next several miles. The deep sand allows you to keep some speed on these down hills, as much of the impact is absorbed with each foot fall. It is a rare treat for me to run fast on a steep down hill, and although I was still passed by faster downhill runners, I had fun.

The last two miles or so are along the Carson River, and are pleasantly flat. At one point I swerved to avoid a ‘snake’ only to discover that it was in fact a squiggly branch from a sage bush. I was glad I didn’t actually trip and hurt myself in my swerve! I finished strong in about 2:17, which I’m not really sure, but I think wasn’t bad for this hilly course.
The post race food was great and I enjoyed myself in the pleasant 75 degree shade at the finish line. This was a well run race, (I mean by the race director, not me!) on a great course, and I highly recommend you try it next year. I know I’ll be back!