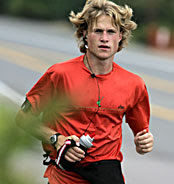 Last week, Jesse Zweig began a planned run to raise money for the Children’s Hospital of Orange County. The 18 year old from Lake Forest hoped to double his impressive 100 mile run of last May where he raised over $6000 for the hospital.
Photo OC Register
He began last Thursday, planning to run through several cities in Orange County along the same course he covered in May in under 24 hours. This time he would take two laps in an effort to raise $20, 000 for CHOC. You can read the OC Register article here.
I can’t help but be in awe of these kinds of goals. When I was a high school cross country runner I thought 8 miles was a really long run. It’s only as I’ve matured that distance seems a more intriguing goal. Apparently Jesse was inspired by Dean Karnazes, and that isn’t surprising. Many of Dean’s long solo runs have also included a goal of raising money for charity. I couldn’t confirm it, but one website did say that Dean joined Jesse for part of his 200 mile attempt.
Although Jesse was forced to quit after 124 miles, I would say his event was a huge success. Jesse did a lot of things right, and he still managed to raise quite a bit of money for CHOC. (The numbers are unconfirmed, but it seems certain that he raised at least $10,000) I applaud him for being smart enough to have a good support crew, and to give that crew the power to make the decision as to whether he should continue to run or not. As it turned out, they decided he should not continue due to sore blistered feet and low temperatures. You can read another article about his finish here.
Great job Jesse! I for one can't wait to hear about your next fundraising adventure.
Posted by Gretchen at 1/25/2007 06:14:00 PM 2 comments:


Following a beautiful summer off from running, I took the fall to enjoy a long slow buildup in my running. My mileage was typically low, about 30 miles per week, and I spent time enjoying the beautiful fall in Truckee. It’s a time when the trails are almost empty, the weather cool but not yet cold, and stunning colors emerge on the aspens and willows in the forest. 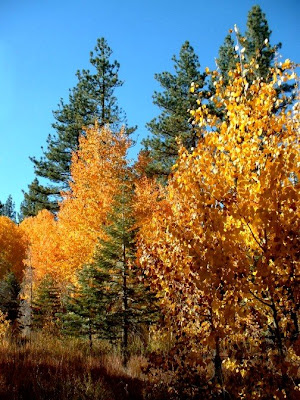 It was nice not having the pressure of anything to train for. Knowing myself well however, I also knew that I wouldn’t run much without the lure of a race on the horizon. With that in mind, I signed up for the Lake Natoma Four Bridges Half Marathon in November. I had heard this was a fast race, although I wasn’t exactly aiming for a PR given the fact that I only gave myself 3 weeks to train. A half marathon seemed like the right distance. Coming from zero as the sum total of my weekly mileage, I knew I would have to do some running in order to enjoy the race. I also knew it was short enough that I could easily finish the race even without a brilliant training plan.

As it turned out, it was a perfect choice to kickstart my fall running. An easy hour and 15 minute drive, I made my way down to Lake Natoma. The race is put on by the same folks that do the CIM and the AR50, so it was sure to be a well run event. I was somewhat familiar with the course because the AR50 utilized the same bike path along the American River. The weather was perfect, just warm enough for me to enjoy running in shorts, but never getting warm enough to be what I would call “hot.” And whoever had told me the course was fast didn’t lie. Even with almost no training I was able to stay pretty close to 8:00 pace. It was by no means a fast time for me, but given the absolute dearth of running in my recent past, I finished feeling satisfied. There’s just something about running with other people and the enthusiasm of the volunteers that gives running a sense of camaraderie that I don’t get from my daily runs by myself. I drove home that morning feeling pleasantly tired, and inspired to put together my racing and training plan for the next year.

I ran trails in Tahoe until it finally snowed, then moved to the roads. During one of my first longer runs, I decided it would be fun to have some tunes. I had used my ipod once since before my canoe trip, and that was while warming up for the half marathon. One use in 5 months. I ran down the street and made it about 12 minutes before the music stopped. I wanted to cry. What is it with these things, aren’t they designed to be used during outdoor activities? Why do mine keep breaking? Will Apple send me another one for free? A few days later I heard a show on NPR discussing how these gadgets are made to essentially be disposable. Apple only wants my ipod to last until the technology advances and the next generation of ipods comes out. Let’s see, that would be about every 6 months. It sounds about right, although neither of mine even made it that long. It’s not that I would never consider buying another one, the allure of having music to run with is strong, but I just have visions of our planet’s landfills overflowing with broken ipods (and cell phones, and laptops, and iphones, etc.) It just doesn’t seem right.

Besides the lack of an ipod, I tried a few other gear adjustments. I bought my first pair of trail shoes. After spending plenty of time last year running through mud, I was hoping some Goretex lined shoes would help my feet stay dry. I chose the Montrail Hurricane Ridge GTX. Well, it’s a nice shoe, but I think the jury’s still out. I can’t remember the last time I had to break in a running shoe. At this point I can go 5 miles in them with happy feet. This is good because that’s exactly how long the loop behind my house is, and even with snow covered trails I get great traction and dry feet. Unfortunately the fit is just not perfect, and I don’t think they’re ever going to be shoes I would wear in an ultra. 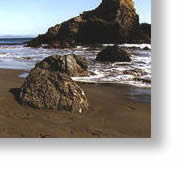 In December I ran a race in the Bay called the Muir Beach Trail Run. This was one of the many runs put on by Pacific Coast Trail Runs. It was another training run for me, and I chose the 17K distance. Runners also had the option of 11K, 33K, or 50K. I’ve heard wonderful things about PC Trail Runs, and they did not disappoint. I loved it mainly because it was in an area I had been told was beautiful but had never seen myself. It started at Muir Beach, just outside of Mill Valley on the north side of San Francisco Bay. It’s only about 30 minutes from the city, and it’s part of a wilderness area called the Golden Gate National Recreation Area. The run began near the beach where we could hear the sound of the crashing waves. It climbed relentlessly for almost the first two miles, and the views were worth it. Sometimes I could see the beach and I was in a remote wilderness. Other times I could see the skyline of the city nearby. I really enjoyed myself, and although I have no idea what my time was, I was surprised when the finish line came so quickly. I was having so much fun I wasn’t ready to be done! Now I find myself thinking about running the Miwok 100K, which runs through similar terrain in the area.

Although it has been over two months since Lake Natoma, and I have been running well, I still don’t have a lot of definite races on my calendar. At the moment I am signed up for the Death Valley Trail Marathon (2/03) and the Way Too Cool 50K (3/10). I have heard wonderful things about both races and I’m really looking forward to running them. Other than that, I am looking at The Great Ski Race here in Truckee, the AR50, the TRT50, the Donner Lake Triathlon, and possibly a 100 miler in September. I’m also interested in competing in the Ultrarunner.net race series, so I may add a few races to my calendar based on their inclusion in that series. It’s wonderful to be sitting at this point: in shape, uninjured, and picking and choosing my races like a kid in a candy store.