Thanks to Robert and Linda, as always, and their fleet of awesome volunteers for a beautiful race on Sunday. (Complete Results) And thanks to Jamie for foregoing a 300K bike ride to run with me on Saturday!
~
My friend Matt is a musician and he just released his latest single, Faster. I'm going to go ahead with the cliche phrase and honestly tell you that I prefer his older stuff. But I'm liking the title of this particular song, if you know what I'm saying, not to mention the way he hitches his leg up when he sings it. And since this version is live, and it's just Matt and his guitar ... well, it just sounds a lot more like Matt to me than the studio version.

In spite of the official change of seasons, it is most definitely still winter up here in the Sierra. Although we spend plenty of time and energy on snow removal, there's something absolutely wonderful about being snowed in. The freeway is closed because of avalanche danger, so I can't get to work. The resort is closed because of avalanche danger, so Andrew doesn't have to go in to work. It's a stolen day off together with no serious responsibilities, and the world is white and clean and new.


Locals are comparing the snow totals to the el-nino year of 82-83, which is a legendary winter in these parts. This kind of snow pack means good things for the drought conditions, but I worry what it will mean for spring flooding in the valleys.

A number of people have asked me for pictures of the snow, so that's the primary purpose of this post. All of these photos were taken of houses in my neighborhood. Enjoy my winter wonderland!


Believe it or not, I'm still getting in some good running. I'll be bailing on the snow this weekend though, assuming the interstate reopens. Sometimes training in snow country means getting out of it.
Posted by Gretchen at 3/25/2011 07:36:00 PM 12 comments: 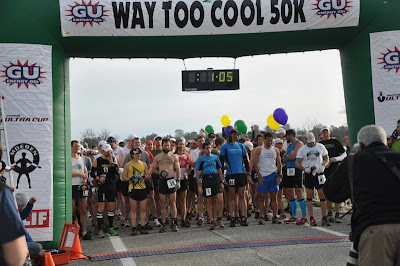 The Way Too Cool 50K found its way onto my 2011 racing calendar for two primary reasons:
1.) Motivation. This race has a large field of very talented runners. Ideally, one could show up with her A-game. In my case, I could at least try not to make a fool of myself.
2.) Get the season started early. I guess this is just restating reason number one. Nothing kicks my training into high gear like the excitement of a race, and sometimes I need to be yanked out of that winter slumber.
If you think of those as my goals, you could say last Saturday was a very successful day for me.
Driving down to Cool on race morning, I felt all the wrong things for race day. I was apprehensive, unsure of my fitness, and unsure of what I was even doing there. I had a million other things on my mind besides the race and I spent the whole drive trying to remind myself that this was supposed to be fun. I arrived at the start still unconvinced. If you’ve ever seen me on race morning, you may realize that this is not like me at all.
It didn’t feel like a very auspicious day for a race, but soon enough I was greeted by good friends who had plenty of hugs. I realized it was sunny out and it would be warm enough to run in a tank top. I also realized that a good portion of the new course was almost exactly the same as one of my favorite training runs. I love to run here! By the time I lined up, there was nothing but running on my mind. Finally: my happy place!
My original goal had been to aim for a sub-5 hour finish. Even though I wasn’t feeling immensely confident, I decided to stick with that goal. I just couldn’t come up with any other time that would satisfy me. I figured there was no point in trying to fool myself about that. 5:20, while still a 50K PR, would feel like a disappointment. That first number needed to be a four.
I looked for Jamie everywhere on the starting line, but sadly had to start without her.  The pace felt quick, but good. When we hit the single track, I could tell I had fallen in with a line of runners going exactly the pace I wanted. Sweet!
At the first creek crossing there was an amusing number of people lining up to cross on rocks in order to keep their feet dry. I splashed right by them with a few others, knowing there would be plenty more where that came from. Wet feet are hardly a concern on such a short race.
I enjoyed conversations with new people all day, and never really felt uncomfortable with my pace until I ran out of water two miles before ALT.
It was my own fault since I had left the previous aid station without a full bottle. I actually managed to giggle at my own stupidity. Ah, such a rookie move. I was forced to back off a little as I felt my calves begin to cramp. I’d been pacing off Clare Abram nearly all day, and now I watched as she took off ahead of me. As usual. (One day I will keep up with that woman, I’m determined!)
The day and trail were both beautiful, and I actually enjoyed the struggle of trying to maintain my pace. I could tell I was pushing the limits of my training, but I also realized that I might actually break five hours. I popped some electrolyte caps at each of the next few aid stations in order to stave the cramping and started keeping a close eye on the watch.
As I blew through the last aid station, I thought about Steve Itano. We’d been running together earlier in the race, and he told me how every year he tells himself that he’s going to run up this last hill to the finish, but every time when he finally gets there he just can’t do it. This year, he said, he was going to do it! So, I promised him that I would do it too. Easy to say at mile seven I guess, but I meant it sincerely.
Now I had that motivation, plus the knowledge that I was cutting it a bit close to go under five. I will admit, I really wanted to walk on that hill. But what I wanted even more was to find Steve at the end of the race and tell him how much he had helped my finish. I never did find him after the race, but I guess it doesn’t really matter. He motivated me just the same. I felt strong after running up that hill, and happily finished in 4:56. 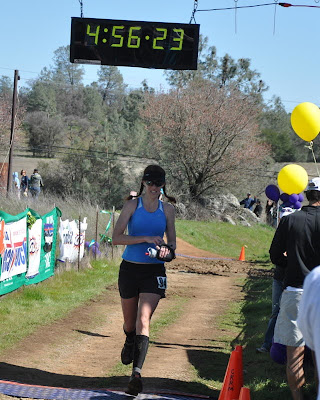 Realistically, I can’t say that things could have gone much better in this race. I met my goal, I had a beautiful day outside among friends, and I left feeling motivated to train harder.
Huge thanks go out to Julie and all the volunteers for such a well done event. Everything was top notch, and I am definitely a big fan of the new course. Thanks also to Jack and Steve for all the pictures on a day when I left my camera at home, and to Jamie for the pre-race hugs. I love runners!
Posted by Gretchen at 3/17/2011 11:39:00 PM 23 comments: