This year, I was once again lucky enough to be a part of the magic that is the Western States Endurance Run. After a stint of volunteering in the morning with communications at Robinson Flat, I was excited to be crewing and pacing for my good friend, Jamie.

I think the weather took everyone a bit by surprise, and we spent time wrapped in down jackets and rain coats, huddled under the shade structures before things really got rolling.

As the runners came through, they were in a variety of states. Many looked great, but you could tell the cold and wet conditions caused some to suffer.  The predicted 30% chance of showers overnight had let loose with a full-blown, cold spring storm throughout the morning. It's simply not what you prepare yourself for at Western States!

When Jamie came through, it was clear the weather had taken a toll on her. She hates the cold, and she was not happy.

Nonetheless, she showed the true spirit of an ultrarunner. She got what she needed, and headed out, hoping things would get better. When you're fairly miserable at mile 30, it makes 70 miles seem even farther than it normally would. It was tough to see her in such a low spot because she's always been so positive at this race, but it happens to everyone at some point, and I knew she could handle it.

Some hours later, Jim and I were at Michigan Bluff to see how the canyons were treating her.

Her resident Western States smile was only half evident, but I could tell by her strong running pace as she came into the aid station that she was much improved from how she'd been feeling at mile 30. Whew!


The next stop was Foresthill which was, as usual, abuzz with activity. Runners everywhere, and friendly, familiar faces. No time for socializing though, as I geared-up to run Jamie from there to Green Gate.

Have you ever seen anyone so overdressed to leave Foresthill during daylight? I also had gloves and arm warmers in my pack. After the frigid morning, I was afraid of getting cold! Also, I lost my running shades, so I had to wear a ridiculous pair of sunglasses that were floating around in my car. Sexy, no? They actually worked great.


Jamie came flying into Foresthill, and I knew it was game-on. The smile was there, but it was also tempered by a look of serious determination. She had come back from a slow start and was now under 24-hour pace. She barely stopped at the aid station long enough for them to weigh her, clearly set on making up for lost time. There would be no messing around now on the way to the finish!

We headed off toward the Middle Fork and I suddenly remembered how much I love this trail. I'd done much less training on it this year, as compared to the previous two years, and it was so much fun to be out there on race day!

Jamie was in good spirits, and we chatted continuously for the first 5 or 6 miles. The pace was solid, and I reveled in the simple joy of being out there with a friend, moving my legs on the trail. 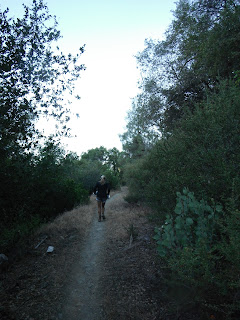 Shortly after the first aid station, she began to pick up the pace even more. I was loving it! Her pace from Foresthill to the river was her fastest of the entire day. I wish I could take some kind of credit for this, but it was all her.

Here she is at Rucky Chucky where they momentarily discussed holding her because her weight was up.

According to the scale she was up 9 lbs from Foresthill, which is a lot for a small person. She and I were both incredulous. There's no way that was accurate! I'd kept tabs on her nutrition and hydration, which were both solid, and she was clearly feeling great. I think her strong state was also apparent to the medical staff, because they decided to let her continue.

And last but not least, the river crossing. This was pretty fun for me because in both of my previous experiences at Western States (pacing Jamie in 2010 and racing in 2011) we crossed in rafts. 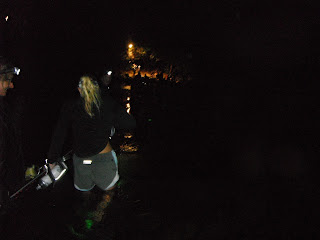 The water was about waist deep, and not too cold. There were a ton of people there to help keep you safe, and it was pretty fun.

Right at the end, my camera came out of my pack when I was putting it back on, and I couldn't find it. I didn't have much time to look, as I had to chase Jamie up the hill. I let it go without too much emotion. It's just a camera. A few minutes later however, a volunteer came running up behind me with my camera in hand. Oh thankyouthankyou kind and wonderful volunteer!!! I was stoked.

After the climb out, I handed Jamie off to her second pacer and wished them well. I knew she would continue her strong finish. (She did, running a 23:21!)

I really wanted to head to the finish line myself to see Jamie and other friends cross the line. I wasn't feeling well though, and by the time I got back to my car I was shivering. I knew I needed to get home and sleep, so that's what I did. (The responsible choice is always kind of a drag, isn't it?)

Western States is always fun. This year I was reminded that we should be prepared for any kind of weather at any race. I got further glimpses at the complex logistics of putting this thing on. I thoroughly enjoyed seeing a friend come back from a tough place in her race to run stronger than ever. I bonded with so many other crews, people I just met, during numerous shuttle rides in and out of aid stations. And, I determined that Metallica's S&M is the perfect soundtrack to keep you awake on a 2:00 A.M. drive home.