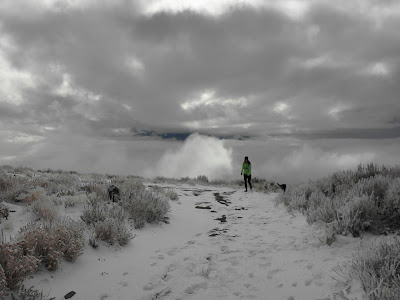 I have to confess, I have some mixed emotions about all this race planning going on right now. My race planning, that is. I find it almost as exhausting as, you know ... racing!

I actually have a couple of spring races that I've already ponied up the cash for, so I started putting together a training calendar. Part of that process entails penciling in other race possibilities. But you know what's really crowding my calendar space?

With races selling out so quickly these days, runners have to choose races well in advance of their registrations opening, then be sure to sign up right away.

And it's not even just those dates. It's also opening (and closing) lottery dates, plus the dates of the actual lotteries. It's simply way too much to keep track of for a girl who operates strictly on Tahoe Time. It's slightly anxiety-inducing.

Although I still haven't decided about lotteries and races, (Scott has a nice list of upcoming lotteries, if you're wondering what races I'm talking about.) I've discovered that two races I do want to enter open their registration on the exact same day. At the exact same minute. Both races will sell out fairly quickly, although exactly how fast is anyone's guess, and both open their registration at midnight on New Year's Eve.

Really? Is that what most ultrarunners do on New Years? Stay home and hover over their computers at midnight? Or perhaps you all have smart phones, and you just sign up for races while doing shots on the dance floor with the crowd. I don't know. But I'm a little concerned about this situation.

Yes, I'm looking at you, Pocatello and TRT!

On the other hand, I do enjoy dreaming, and planning is part of that process. Scheduling all these things brings some of the same discipline and order to my life that running itself does. It tames just a bit of the chaos.

Seeing a race on the calendar, even if it's still just a possibility, inspires my training. When I'm crawling, cross country, up some steep mountainside, I think about exactly which races that training will benefit. I get excited. I have purpose. I run faster.

I grin with wicked delight.

What races and lotteries are on your wish list this year?

Drama and Sport: How High School Football is Like a Good Book.

I was rolling down Donner Pass Rd. last weekend, just finishing up some errands, when I had cause to reach out and turn up the volume on the car radio. Our local station, as is typical for a Saturday in the fall, was broadcasting the high school football game. (Yes, my town really is that small.) What piqued my interest was the tone of voice of the announcers, informing the listeners that the Wolverines had been shut out at halftime. They seemed surprised. Almost worried.

I knew the team held a huge winning streak, the largest in the state, at 34 games. Since this was the playoffs, it had the makings of a good game, and when I pulled in the driveway I asked my husband if he wanted to run down to Truckee High to catch the second half. What we witnessed was one of the best sporting events I’ve seen in years. 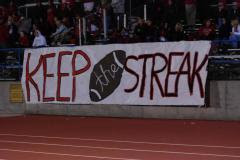 I’ve long declared that my favorite movie genre is what my husband calls the “feel good sports movie.” I love the drama of sports. Movies like Miracle, Invincible, and Remember the Titans (all based on true stories). Nothing makes me cry like a good Cinderella-Story sports movie.

In thinking about this fact after the high school football game, I realized the real draw of sports like this to me – they have all the makings of a perfect plot. They’re a story just waiting to unfold. Drama in real life. Watching a good football game, or any sporting event, is like reading a gripping novel where you really can’t tell what kind of ending it’s going to have.

You couldn’t have created better plot structure for a story than the events that took place on the field at Truckee High that day.

You had conflict: Not only do you have one team against another, but Truckee football had the added pressure of a 34-game winning streak spanning 3 years. KCRA TV in Sacramento called them The King of California Football. More than once, the Fallon High School fans in the visitor’s bleachers took up the chant “Break That Streak!” Not to mention, of course, the winner of this game would advance to the state championship game.

There was plenty of rising action: Truckee didn’t get on the board at all in the first half, starting the 3rd quarter down by a field goal. Tension already. Then, in the second half, the lead changed hands three times. Neither team was ever more than a touchdown away from losing their lead. Andrew and I stood at the fence behind the end-zone with other late arrivals, cheering and wailing with every play. We were in solidarity with strangers with whom we had one thing in common – we wanted our team to win! With every second lost on the clock in that 4th quarter, the tension grew.

We even had an excellent false climax: Fallon scored and was up by 3 points with 4 minutes left to play. Truckee took almost that entire 4 minutes to get the ball back to our end of the field. With less than 30 seconds left, they were fourth and goal. A field goal would have tied it up, but they chose to go for it. (Well, we’re a ski town: Go big or go home!) They squeaked into the end zone with 8 seconds left on the clock. The crowd went absolutely NUTS! I mean, I didn’t even know we had enough people in our town to make that kind of noise. We picked up a 15 yard penalty for “excessive celebrating.” I didn’t really think it was excessive, considering.

And of course, the climax: “Well, game’s over, let’s get out of here.” We walked about ten yards before changing our minds. May as well watch the last 8 seconds play out. A Fallon player caught the kick-off and somehow found a hole. He was running. Flying. Streaking for that end zone. Oh. My. God.

“”No! No! No!” We all screamed. They were at the far end of the field, so I couldn’t see what happened, but the crowd’s reaction told all: The Truckee side roared in triumph, while Fallon’s fans let loose with painful moans. SO CLOSE!

But guess what? That wasn’t the climax. It was just another false climax! That is what you call some good rising action. It’s a page-turner of a story.

There was a penalty called on the play. “A late hit,” another fan told me. I looked at the scoreboard. No time left on the clock. So … did we win?

I don’t know the rules that well, but apparently the penalty called for one more play, even though no time remained. You have got to be kidding me!

The players lined up again as we all held our breaths. The Fallon players couldn’t make it happen, and once again Truckee fans roared –now with equal parts relief and triumph.
And that, really, was the resolution: Relief, triumph, and looking to the State game this weekend. All the most exciting stories end with the climax, the resolution only a footnote: The End.

Thanks for the drama, Truckee boys. Good luck at State tomorrow!

Do you have any favorite sports dramas?

Winter has arrived. Absolutely and without question. She made her presence abruptly known when, from one weekend to the next, we traded our shorts and tanks on long runs for tights and gloves.

The photographic evidence from Saturday's long run on the Emigrant Trail in Truckee, where it was a speed-inspiring 17 degrees Fahrenheit:

I enjoyed last year's summer tribute so much, that I thought I'd make it a tradition. Here's a look back, photo-style, at some beautiful moments of summer:


For now, I'm snuggled up by the wood stove looking forward to some snowy backcountry adventures for the next few months. It's a good time to be dreaming and planning races for next spring and summer, and remembering the best of this one.

What were your favorite races and adventures of this summer?

In our house, we have what we call the "two shoe rule." That is, we (my husband and I) are each allowed two pairs of shoes on the downstairs shoe rack. The rack, which currently lives in our as-yet-unfinished mudroom, looks like this: 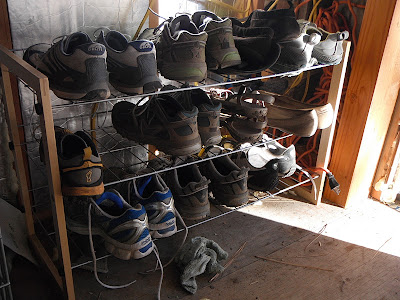 And, as you may have guessed, not a single pair of shoes in that photo belongs to my husband. Further, I count a total of seven pairs of running shoes. Seven! Plus one single.

I'm really not certain how this state came to be. 80% of my mileage can be attributed to only two of those pairs of shoes, and another two pairs I certainly haven't worn for at least six months.

But has anyone called me out on breaking the two shoe rule? Not once. Not even a peep.

In addition, he made creative use of the situation ... 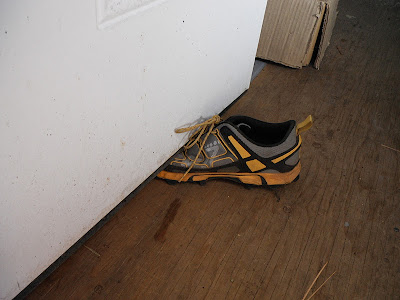 with a X-Talon door stop through the construction zone (accounting for the single on the shoe rack).

There's a whole lot to be said for flexibility in a partner.