My decision to run the Death Valley Trail Marathon was based largely on the many reports of the magnificent scenery on the course as it descends through Titus Canyon. I signed up with the knowledge that for the last three years in a row the RD’s had been forced to change the course due to snow, floods and rockslides. I had not heard glowing reports about the alternate course: a flat out-and-back across an area fondly called the Devil’s Golf Course. So when I departed Truckee on my seven hour drive towards the desert, I was excited that everything was still a ‘go’ for the Titus Canyon course. 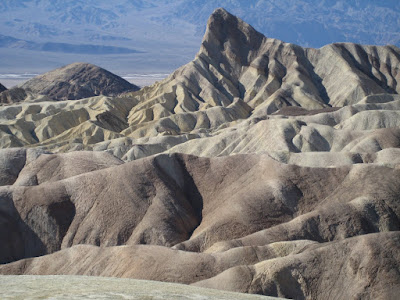 I arose early Saturday morning in Death Valley National Park. The mandatory runner check-in was at the saloon at the Furnace Creek Ranch at 6:15 am. I couldn’t remember ever starting a race with a visit to a bar, but it was a fitting beginning for what turned out to be a day filled with fun, camaraderie and beautiful scenery. The day didn’t wait until the race began to inspire us with scenery either. As we stood about pinning numbers to our shirts and trying to stay warm, we watched the nearly full moon set over the mountains washed in pink.

Before loading the fleet of school busses that would take us to the start of the point to point course, we gathered to listen to instructions from race director Dave Horning. He reminded us that we could not have personal vehicles following along the course, and that Enviro-Sports has a strict “no headphones” policy. These rules turned out to be quite serious, as runners who broke them were later disqualified. Next he gave us the course description, which went something like this. “There’s no ribbons, no course marking, no mile markers. The course is one way on Titus Canyon Road. If you get lost on this course, well…” He laughed and gave us a look clearly indicating that only a complete idiot could get lost on this course. He reminded us to return our timing chips at the end of the race, and admonished us to “wear your chip on your ankle, not your shoulder.” I spent a moment trying to figure out how exactly I could get the Velcro band of the timing chip around my shoulder, until I noticed a few other people laughing and finally got the joke. “Tough crowd!” Dave said to the lack of laughter. Not so much tough, as just stupid (myself included).

When we arrived at the starting line it was still so chilly that I was loath to remove my warm clothes and put them on the bus to the finish area. I don’t know what the temperature was, but shorts and a long sleeve shirt were definitely not enough to stay comfortable. We all shivered on the starting line, while Dave gave us the starting instructions. “Now, I’ll drive my car about 50 yards up the road,” he began, “and then I’ll tap my breaks. When you see those break lights flash, that’s your signal to start.”

We all laughed this time, but I turned to the runner next to me, “I don’t think he’s kidding,” I said. She nodded her agreement. Sure enough, a minute later came a flash of red from down the road, and the runners up front took off.

The first five or six miles were basically flat, following a dirt road that offered plenty of obstacles in the form of sand and gravel. There were about 300 runners, and the crowd didn’t thin out much in the first five miles. I got to the first aid station and checked my watch. Forty eight minutes. Well, I certainly hadn’t made the mistake of going out too fast! I didn’t bother filling up my water bottle, as it was still ¾ full, and set off for the next aid station at mile ten.

I don’t really consider myself a good downhill runner, so I figured the next 7 miles or so of uphill were bound to be my best part of the race. With this in mind, I began to increase my effort on the very mild, but steadily increasing incline. 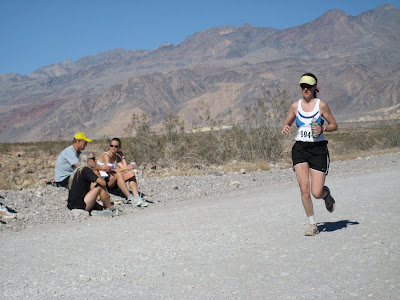 I also realized at this point that I needed to pee. We were still in open desert, with essentially nothing to hide behind. I relaxed with the knowledge that there were port-a-potties at the start of the 30K, which should be somewhere around the 8 mile mark. The race began to spread out at this point as well, allowing me the freedom to pick my course down the road. This was not insignificant, as one side of the road might offer solid, hard-packed footing, while the other was covered with deep sand. Eventually I started checking my watch, wondering where the 8 mile mark was. Surely I should have been there by now! When I finally saw the busses that had carried the 30K runners to their start, and the blessed port-a-potties, I saw that there was also an aid station there. Could this really be the ten mile aid station? That would agree with my watch, which indicated that I had kept the same pace that I’d held for the first 5 miles. But if that was true, had the 30K runners really started here as well? That would make their 30K only 16 miles. Well, math was never my strong suit, especially not while running. I stopped trying to add it up, and charged off up the hill.

We finally reached the mountains, and the scenery started to change. Colorful walls of rock appeared, as we made the first climb towards White Pass. The road we were running on had also become rockier. I started wondering if we were in Titus Canyon yet. It seemed rather canyon-like, but then we came out into the open again and I thought, “That can’t be it! Too short!” Then again, I really didn’t know how long the canyon section would be.

Soon we began a welcome descent, between the two passes. My hips had begun to tighten up from the uphill, so it was a relief to stretch out my stride and get some speed on the downhill. As we descended, we could look across the small valley to see runners headed up the switchbacks on the other side, small dots of color making their way in a never ending zigzag up the red rocky face.

“All this downhill can only mean one thing,” I commented to another runner as he passed by. We commiserated as we watched our impending fate begin to unfold. Dave had used some fairly harsh language when describing this hill at the runner check-in, and I can say it was an accurate description. I used a run/walk strategy of running two minutes and walking one. This worked well for me. I didn’t feel like I was pushing things too hard, but I did seem to be slowly passing other runners.

I took in the view from the top, and began the 14 mile descent to the finish. The first couple of miles were steeper than I had hoped, but I did my best to use gravity to my advantage while staying in control. I found myself with my eyes glued to the trail in an attempt to avoid slipping and careening off the side of the mountain. After a few quad-pounding miles, the hill leveled out a bit and we truly arrived in Titus Canyon. This time there was no doubt.

I finally understood why, after three years in a row of being thwarted, Enviro-Sports still tried to hold a race here. It was also abundantly clear why the route could be closed due to flooding and rock slides. The sides of the canyon seemed to come straight out of the ground, rising in high vertical walls on both sides. The canyon walls were striped with multi-colored bands of rock, and at some points the floor narrowed to about 10 yards between both sides. It was not someplace I would want to be caught in a thunderstorm! I could clearly picture the rushing river that had carved this wonder; it was visible in the sharp turns and undercut walls. Some sections of the canyon were quite chilly, and it seemed apparent that the sun could only briefly squeeze down into that crevasse.

I came through the 15 mile aid station feeling great. I sucked down my second GU, which I brought with me since the aid stations didn’t have any, and headed off towards the next aid station at mile 20. I think being on a course that looks flat, but is really downhill, gives you a mental boost. You feel like you’re going faster with less energy. It’s like magic! Okay, and it didn’t hurt that I had run the first 5-10 miles at a reasonable pace.

The last aid station was at mile 23, right at the exit of the canyon. There is a dramatic change from being in the tight, closed in space of the canyon, to the wide open desert, and it happens immediately. I grabbed a piece of banana to keep the late marathon bonk at bay, and headed off towards the finish line, which I could already see, 3 miles away.

Mercifully, the downhill continued, and the last 3 miles weren’t too painful. I was finishing with the tail end of the 30K runners, and there were plenty of runners, and even a decent number of spectators. I had shed my long sleeves by mile 4, but even at the finish the temperature was not too warm. It was perfect, in fact!

I was a little disappointed in my time, 4:10, but then I had to remind myself that it was just supposed to be a training run. I was glad I hadn’t forgotten that during the race! I still managed to finish 7th for women.

I had a great weekend, on a spectacular course! I would almost certainly do it again, if it were not for the long drive; that, and the risk of having to run on the Devil’s Golf Course! Thanks so much to everyone at ES and all the volunteers, it was a great day.

I’ll leave you all with another classic quote from Dave. “Those Rock ‘N Roll Marathons, they think they have such a great thing because they have a rock band at every mile. But we have one continuous band of rock!” 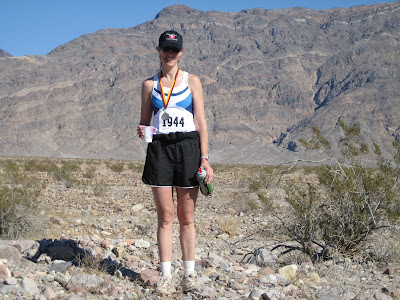