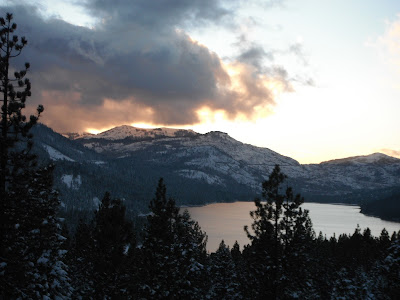 I often wonder if I am the only one in this life to find myself trapped in clichés, the current one being, “The Holidays are a Tough Time of Year.” I always think about that exchange between Billy Crystal and Meg Ryan in When Harry Met Sally, where Sally says in simple annoyance, “Yup. A lot of suicides.” Ha! I don’t know why I find that to be so funny. Is there something wrong with me?

I actually love the holidays because I get to see friends and family. (Two weeks off from work doesn't hurt either.) But the frenzy of activity, and the number of things that don’t get checked off my To Do List, send my stress level to uncomfortable heights. I find it all enjoyable when I remember, (and here comes the next cliché) that it’s all about giving, and gratitude, and love, in all of its beautiful, strange and often messy forms.

With the giving portion in mind, it is once again time for Nathan Bransford’s Heifer International Fundraising event! For every comment you leave on this blog post between now and Christmas Day, I’ll donate $2 to Heifer International. Super easy! Head over to Nathan’s blog as well to see who else is participating and leave them comments to raise even more money.

Giving, people. Giving! (It will make you feel good. I promise.)


Update 12/26: Thank you for all the comments, everyone! With 17 comments, plus a few from Facebook and Twitter, I made a $40 donation to Heifer. I went for sheep this time because right now with all the cold and snow, I am really appreciating wool! We sponsored 1/3 of a sheep. Nice work, you guys!


My husband Andrew has a question he poses to everyone on their birthday. He asks it of dear friends at birthday parties, as well as the woman in front of him in the lift line if he happens to learn it’s her birthday. He wants to know, “What was the high and low of your year?” I find it to be a dauntingly personal question, but he always gives people the out of “just thinking about it.” Surprisingly, they usually give an answer, even if it takes a bit of time, often trusting us with intimate details of their lives.

It’s the “thinking about it” that turns out to be the important part, in my opinion. I’m big on reflection, and often I don’t think we examine our lives enough so that we can learn and grow. Also, it’s fun to relive the good moments!

For myself, I am horrible at answering this question. I can never narrow it down, and I certainly don’t want to reveal anything painful in front of a bunch of strangers. As far as I can tell, I’m in the minority on that one.

My low is something that has stretched on for the entire second half of the year: my digestive woes. I thought things had healed up after Hardrock since I felt great all through August and the beginning of September. It all came back with a vengeance this fall though, and to sum it up: it sucks. Being in pain is totally crappy, and it keeps me from running which makes my mental health even worse. You know who deserves the most sympathy in all of this though? My students. I am not a fun person to be around when I am in pain, and my temper is short. Sorry, kids!

I even spent a month on the Whole30 program, which Olga tipped me off to, in an attempt to heal. (As a side note, if you’re looking for inspiration for your next crazy goal, Olga’s blog is a pretty good place to hang out. She’s always got something going on!) The Whole 30 is basically a 30-day super strict paleo diet. I ate only veggies, fruit, meat, and eggs. No grains, legumes, dairy, or anything processed or with added sugar, preservatives, etc. No alcohol, and although coffee is permitted, I thought it best to skip that as well since it could be an irritant to my digestive tract. In other words, it was total deprivation.

This isn’t the kind of thing I would have ever considered if I wasn’t trying to solve a health issue. Whole30 does not choose foods "because that's the way our ancestors did it," (which, frankly, I don't find to be a convincing argument for anything) but rather, based on their nutritional value. I did a lot of reading about it and learned why consuming a lot of foods that we normally consider to be healthy could possibly be causing me problems. I can’t help but believe that my intestinal pain can be healed by simply choosing the right things to put into my body. If only I can figure out what those things are!

It was actually a great experience, even though it didn’t turn out to be magical solution for which I’d been searching. (I had a flare-up of pain in the middle of the month.) I slept so much better, my energy levels were more stable, and I didn’t get hungry all the time. The hardest part came during the first week with all the meal planning, researching what I could make for myself, grocery shopping, and cooking. Eating healthy takes a lot of time! I became dependent on my slow cooker, and made more frequent trips to the grocery store. Of course, grocery shopping became a quicker affair as I didn’t need to bother visiting about ¾ of the store – just the produce and meat departments for me! I cooked fabulous dinners, and Andrew, who was initially bummed about this endeavor, became a huge fan of the paleo meals.

Even though I went off the program after my 30 days were up, I learned a lot and it has definitely changed my eating habits for the better. I am still eating “Whole30 style” for breakfast, lunch and snacks. I’m mixing paleo –friendly dinners with occasional other meals and I feel good about it. My biggest indulgence since going off Whole30 has been a lot of sweet treats. It’s a tough time of year to avoid that. But for me, that's true all the time. I love sugar!

Although weight loss was definitely not a goal for me on Whole30 (I was still hovering around racing weight when I started the program and didn’t have any weight to lose.), I somehow lost 3 pounds and ended the month with 16% body fat. I found this to be pretty surprising since I was doing only moderate exercise that month, consumed a ton of yummy food, and was never hungry. If weight loss is your goal, I’d say this is a pretty healthy way to do it.

I’m thinking of going back on Whole30 in January, with the exception of allowing sugar for fueling and recovery of long runs. My one long run on the program (4 hours) was an interesting experiment in fueling without Gu or any of those other things. I ate mixed nuts, avocado, and those squeezable mashed fruit pouches they make for kids. I refueled afterwards with butternut squash (yum!) and a little Udo’s Oil/turmeric cocktail (yuck!). It felt pretty good, but it was a very mellow pace, and I could tell I couldn’t have gone any harder without bonking.

Anyway, as far as the gastritis-gall-bladder-who-knows-what-the-problem-is thing, I did return to the doctor. He was fairly unhelpful, except to refer me to a specialist which will take me 3 months to get in to see. I’m finding the whole experience to be a bit frustrating. It’s no wonder people just walk into the emergency room for medical care. Alas. I’ll let you know if I figure anything out.

And now that I’ve told you all about my tummy troubles, I’ll share half of the truth: That’s not my real low. But it’s low enough, and it’s all intertwined, really. Life is complicated, you know? It’s funny how your physical health can be a reflection of your mental health, and vice versa. I’m well aware that without difficult experiences in life we’d be unlikely to grow as individuals. Still, sometimes I’d rather skip the really hard experiences and just remain static and shallow.

I have to include Hardrock as one of my highs. Honestly, I can’t remember anything about this year prior those two days in July. Did anything else even happen? Because even if it did, it was all consumed by my obsession with Hardrock. Racing-wise, I was happy with my performances at Napa and Sonoma (It was a wine-country year for me!), but those events weren’t soul-digging like Hardrock. That one will stay with me for a long time. I think it’s the only race in my entire running career where I was immensely proud to simply have finished. It was a race where one of my faults (my ability to be single-mindedly stubborn) turned out to be my greatest asset. Anyway, I’ve already spent enough words on this race. Suffice it to say, it’s an experience I wouldn’t trade for anything.

My other big high is Andrew graduating (near the top of his class, no less) from the Fire Academy. It was an epic summer for him. I wish I could tell you the stories, but they are not mine to tell. The best part: Two weeks before graduation he’d already landed a part-time job at Northstar Fire, just fifteen minutes from home. His second day on the job he came home all stoked about his first 911 call. It makes me so happy.

Looking back is always something that helps me look forward. For 2013, I’m thinking about shifting my racing to a little later in the year so I can spend my winter skiing instead of worried about getting in my long runs. I don’t have any 100-milers on the schedule. If I decide to enter one, it probably won’t be until the fall. I’m just not prepared to think about that kind of training any time soon. I’ve got a few 50Ks and at least one 50-miler on the plan, and that feels like enough for now. I love this time of year because all the time away from racing has me excited to get back to it again!