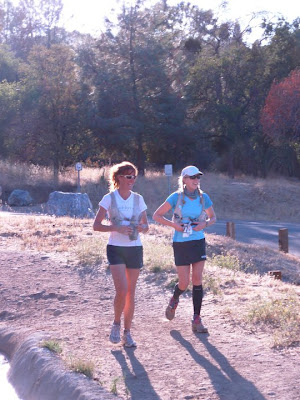 Call it chance, luck, fate. Call it a synthesis of awesome. Me? I’ll say an ability to recognize a cool person and a good time were what landed me on Paige’s pacer and crew team last month for the Rio Del Lago 100.

Her entry into Rio was something of a last minute decision, and when I heard the news, I immediately offered up my services. Paige lives in Chicago, and the Rio course is only about an hour from me. I figured she might not have a lot of local resources for pacing or crewing, and since we’d never met in person, I knew this would be a great opportunity. Plenty of people outside of the ultrarunning world have expressed surprise that I would so easily give up my weekend (and its accompanying sleep!) for someone I’d never met. But if you’ve ever been part of a 100 mile race, you know this is just the way these things go. That’s part of the beauty of it, in my opinion. Plus, with a blog name like “Serious Case of the Runs,” how could Paige not be a fun person to hang out with, right?

I met up with Paige’s crew at the Auburn Dam Overlook at mile 22 to help them out for a few hours before I would begin pacing Paige at mile 45. This turned out to be a good call, since not only did I get a chance to discuss logistics for the night, I also learned a lot about what kinds of things Paige would need at aid stations in terms of nutrition as well as the other little details. Every runner does things differently, and it was helpful for me to see how she rolled before she would really be depending on me.

On board for her crew were her boyfriend Geof, and Geof’s uncle Steve. A funny thing about crewing for a runner – you actually spend a lot more time with her crew than you do with your runner. Fortunately, Paige’s crew turned out to just as awesome as she was, and I had a great time hanging out with them. I also got to meet and hang out with their good friends from Chicago, Brian (running) and Kelly (crewing and pacing for Brian). 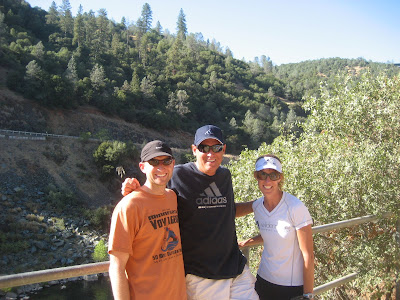 The crew waits at No Hands Bridge: Geof, Steve, me. 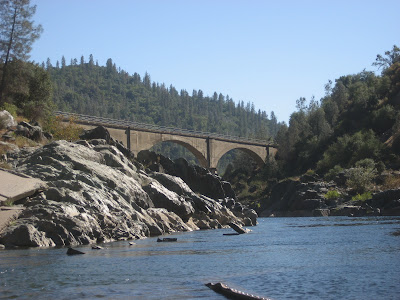 Cooling off with a dip in the river near No Hands. 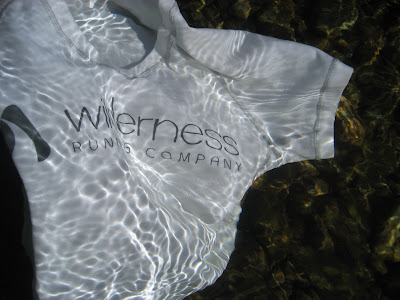 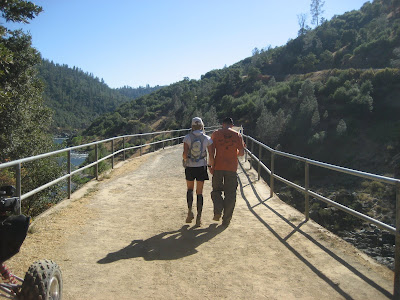 The day was warm, and both Paige and Brian did a great job of pushing through the mid-day heat on the dusty trails. Before I knew it, we were back at the Overlook where I would join Paige for about 23 miles.

We had a nice, mellow downhill out of the aid station, and Paige appeared to be doing fine. By the time we reached the next aid station, only 1.5 miles from the Overlook, I noticed Paige was making her 2nd stop in the bathroom in as many miles. I wasn’t overly concerned about this, but when she exited the outhouse at the Maidu aid station to announce she had just tossed her cookies, I started to worry.

Great, I thought, she’s been doing awesome day, but now she’s been under my charge for less than two miles and she’s already puking. I always feel so helpless when I see a friend struggle with stomach problems in a race. With the help of the aid station crew, we got her a little rest and some food back into her stomach. The miracle of a shoulder rub and a pedialyte pop! Or maybe just luck, but either way this turned out to be Paige’s low point, and she bounced back beautifully. 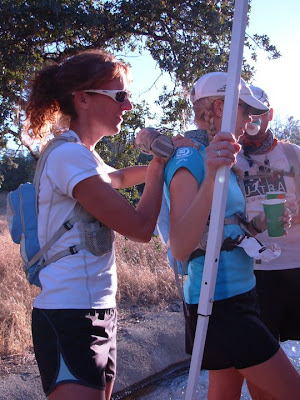 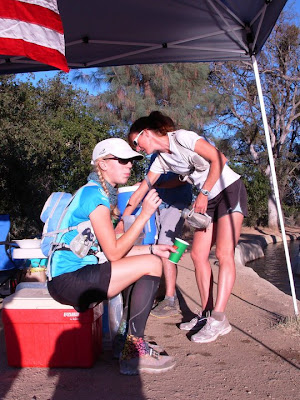 Or maybe it was that Pedialyte pop.

The rest of the evening, and into the night, we ran along seemingly without a hitch. I knew we were going to get along just fine when, in the very first mile of running, Paige automatically employed the “farting” warning system I’d described in my post about my friend Charlie. It’s always good to start a run off with giggles!

We chatted away about everything from how Paige got into ultrarunning, how she met Geof, to live concerts that had brought us to tears (hers: John Butler Trio, mine: Michael Franti). We shared stories of our pasts and plans for our futures. Paige ran almost every single step, and I was blown away by her consistent pace. I realized that I could really learn something from her on that front, and it was great for me to see such a good example of how to run a 100. It was ultimately the easiest and most enjoyable pacing job I could have imagined. 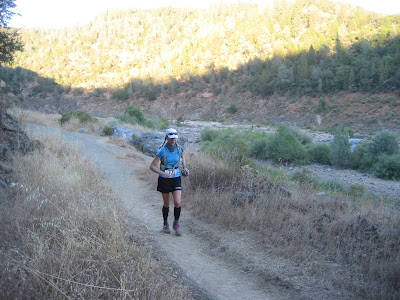 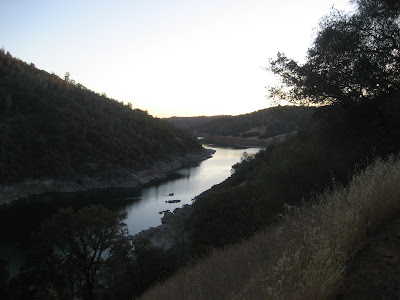 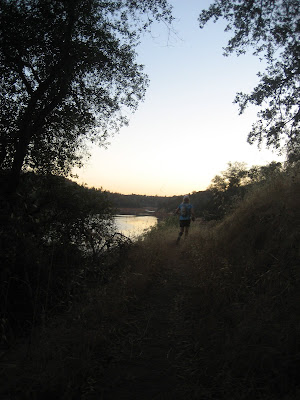 I handed off pacing duties to Geoff at about mile 68 and joined Steve to crew through the rest of the night and early morning. I had never done any major crewing before, and Steve was completely new to this whole ultra thing in every way, so it was a fun adventure for us. The Rio course has a ton of crew access, which is a good thing since frankly I found some of their aid stations to be less than adequately supplied. This also meant that we had plenty to do and didn’t spend too much time sitting around waiting.

When we found that we had about an hour of wait time at one aid station we both thought it would be a good chance for a quick nap. I stretched out in the dirt with my sleeping bag and a pillow, my alarm set, and had no problem quickly falling asleep. I finally stirred around 3:15 A.M. and sat up in a panic when I saw the time. My alarm had been set for 2:40 and I’d missed it!
I immediately ran to the aid table to see if Paige had come through yet. When I learned that she had, I felt like a complete jerk. Oh my God, I’m the worst crew person ever! I went back to wake Steve and give him the bad news.

“No, it’s okay,” Steve tried to interject into my panicked ramblings.

“But we missed them!” I insisted. Clearly Steve did not understand the gravity of this situation.

“You did?” It took a second for this to sink in. Wait. We didn’t miss them? “Are you sure?” I asked stupidly. Steve just started to laugh. I couldn’t believe how relieved I was.

The rest of the night flowed along merrily in a tide of sleep-deprivation-induced humor. We struggled to find some of the aid stations in the dark – every wrong turn seeming nothing but funny; we snuck into fancy hotels at 4:00 A.M. to use their bathrooms; and every now and then I would look at Steve, recall my pure panic from earlier in the night, and burst into laughter. He knew exactly what I was laughing at and would simply join in without question.

We finally found ourselves back at the finish line at Cavitt Middle School, awaiting Paige and Geof’s arrival. It was a beautiful thing to behold. Paige still looked awesome when she crossed the line, and just so darn happy. The woman is a rock star. 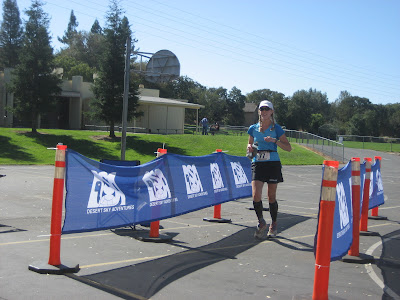 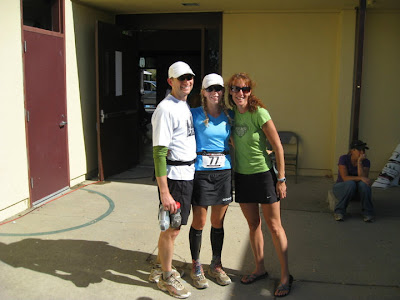 Pacing and crewing isn’t always easy, but it really can be when you get to do it with a group of fun and easy-going people like this. I also appreciate that it’s a great way to take part in a 100 mile race without having to go through all the pain of actually running it yourself. Very nice!

Congratulations again, Paige, and thanks for letting me be a part of your experience! 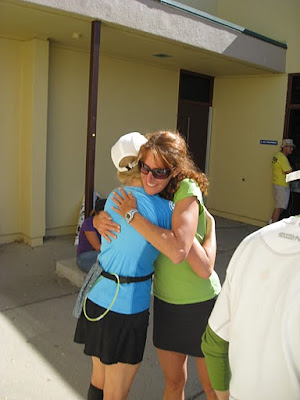